Abingdon on Thames , a historic market town set in rural Oxfordshire which proudly claims to be the oldest town in the country.

The Cholsey and Wallingford Railway is 15 mins walk west of Wallingford, steam and diesel trains run on 2.5 miles of track. 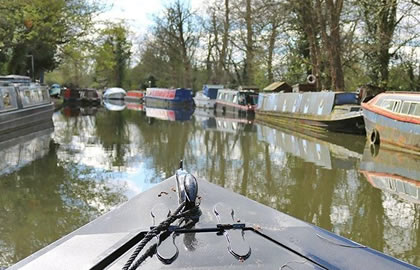 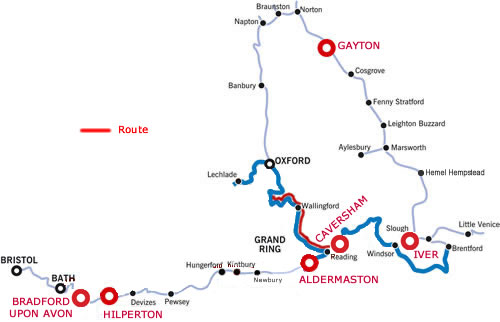 The Thames continues past Tilehurst and soon Mapledurham House is reached with mooring just beyond the lock.
The house is still occupied by the Blount family who bought it in 1490, and built the present Elizabethan manor house, with grounds sweeping right down to the Thames. The House and Watermill are open on Saturdays, Sundays and Bank Holidays from Easter Saturday until the end of September .

Moor here for the night it is 2 hours to here

Moor for the night before Whitchurch Toll Bridge, there should be moorings on your left.
The Ferryboat Pub is to the north over Whitchurch Bridge, and has Stone-baked pizzas and bistro fare in a cosy pub with open fire, courtyard garden and dining room.
The Swan Inn in Pangbourne is a 17th century gastropub on the riverside.

Goring is set in a splendid deep wooded valley by one of the most spectacular reaches on the River. The Church Bell dates from 1290 and is one of the oldest in England. There are moorings before Goring bridge.
See link below for moorings.

There is plenty of time to have a look around and stretch those sea legs - Two National Trails – The Ridgeway and the Thames Path intersect at Goring and Streatley, making the villages a popular stopping off point for those who prefer long distance walks. However the area is equally popular for its countryside allowing pleasant strolls both along the river and on the beautiful hills that bestride the Goring Gap with magnificent views in all directions across Oxfordshire and Berkshire. As a visitor you will be spoilt for choice if you are looking for the perfect picnic spot.

The River follows open countryside again, with just Goring Lock and Cleeve Lock to negotiate in the next couple of hours until you reach Wallingford. Moorings just past Wallingford Bridge, taking the central arch, there is a small charge .

Moor for the night here it is 5 hours to here.

This town is one of the oldest in the borough dating from 1155. Well preserved banks and ditches of Saxon defences still remain. At the rear of the George Hotel is the entrance to the remains of the Norman castle built on a mound in 1071and finally destroyed by Fairfax in 1646. Walk up the hill from the river to enjoy the town centre, shops and market square. The Cholsey and Wallingford Railway is 15 mins walk west of Wallingford, steam and diesel trains run on 2.5 miles of track.

Just past Benson Lock is the town of Benson, which is hardly more than a village but was once the home of the Kings of Mercia. There is a stores and pub.

The River Thames turns west and north to take a wide berth around the Roman town of Dorchester, passing the massive 114 acres of earthworks known as Dyke Hills. It continues to make its widing way past Abingdon, there are moorings just before the bridge.

Abingdon is a 18th century market town which grew up around the abbey. It has an extensive shopping centre with precinct. Abbey meadow by the river, is a public park with swimming pool and cafe. The River is dominated by the gaol, an impressive stone bastille built around 1805, which is now a leisure and sports centre. Abingdon Museum is housed in what is one of the finest town halls in England, built by one of Wrens masons.

It is 4 hours to here
After you have had a look around turn your boat and cruise for a couple of hours back the way you came, it is 11 hours back, or you may have done it in less time!!

Continue back to the marina