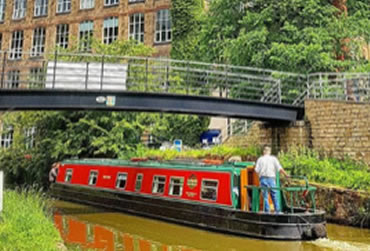 Directions to the Bollington Wharf

An excellent boat to explore the Macclesfield and Peak Forest canals or go further afield and around the Cheshire Ring or up onto the Caldon Canal.

Macclesfield - The earliest settlement has been recorded in the Domesday book, it rose to be the most important town in East Cheshire , and now has cobbled streets and an picturesque market square, like the old market town, with some fine classical buildings mixed in with the modern. See the Silk Museum which was one of Macclesfield's major industries.

Bollington- Cotton once ruled in this area. Discover the bustling past at Clarence Mill and Adelphi Mill which sit alongside the Canal. From here it is only 1 mile to the bounday of the Peak District National park

The Macclesfield Canal passes through mostly green and rural surroundings, with Victorian mills and warehouses along the way adding a distinctive character. For boaters, it forms part of the Cheshire cruising ring. It is a tree-lined canal that follows the natural curves of the land, with only one lock flight on it. It is remembered by holidaymakers both for its elegance, particularly the roving or turnover bridges that allow a horse to transfer from a towpath on one side of the canal to the other without the need to unhitch; its spectacular views; and its architectural follies. For walkers, the towpath is a lovely place for a gentle stroll. If you are looking for a more ambitious hike, the Cheshire Ring Canal Walk follows the cruising ring an impressive 97 miles in total. Around Higher Poynton the Canal becomes wider , and some consider this stretch to be the most pleasant moorings on the Canal, because the wide water supports large families of geese, ducks and swans.

Cheshire Ring - A fascinating trip that takes you through the heart of Manchester and the Peak District with its distinctive stone architecture. The Cheshire Ring is a canal cruising circuit or canal ring, which includes sections of six canals in and around Cheshire and Greater Manchester in North West England: the Ashton Canal, Peak Forest Canal, Macclesfield Canal, Trent and Mersey Canal, Bridgewater Canal and Rochdale Canal. It passes through contrasting landscapes between Manchester city centre and rural Cheshire with views of the Peak District and the Cheshire Plain.

The Caldon Canal is widely seen as one of them most interesting waterways in the country. The canal was built to carry limestone for the iron industry and flints for the pottery industry. It is still steeped in history, with fascinating industrial buildings visible along the Stoke section. Further along, you may see a steam train chugging along where the Churnet Valley Railway passes close to the canal. The outstanding scenery along the route means there is lots to see for boaters, walkers and cyclists.

By Road : On the on the Macclesfield Canal at Bollington Wharf in the town of Bollington

By Rail : Macclesfield railway station is a main line station serving the Cheshire town of Macclesfield. It is 3 miles from Bollington

By Air : Manchester International Airport is only 20 minutes away by Taxi

Other Useful Information for Bollington Wharf