You can do this route from :
Barnoldswick.

Set in stunning scenery, the friendly market town of Barnoldswick - known affectionately to locals as Barlick - lies at the very heart of England. The town is quaint, quirky, colourful; above all Barnoldswick is friendly, warm and welcoming, full of character - and characters!

Nestling in the Pennine hills between Leeds and Manchester on the Lancashire / Yorkshire border, Barnoldswick is one hour's travel from either city. Barnoldswick is where Bronte Country meets the Yorkshire Dales, Pendle Hill and the Forest of Bowland.

Burnley was once the world centre for cotton weaving. The 2nd half of the 19th century was a busy time for the town and since the 1980's has been the source of much restoration in the Cotton mills,
The area astride the Leeds-Liverpool canal is known as the Weavers Triangle. 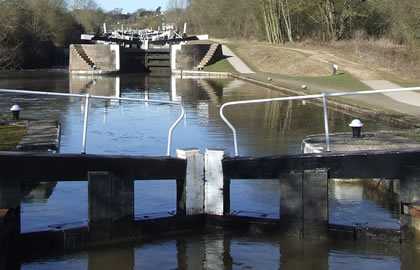 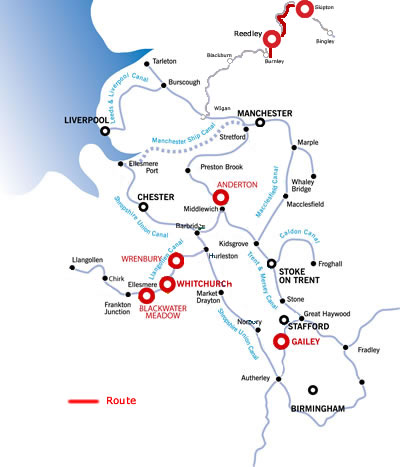 In the distance on a clear day you can see the summit of Pendle Hill (1831 ft high), this is an attractive part of the canal unspoilt by industry , with ever-changing views.

Barnoldswick is set away from the canal to your right access from Bridge 154a - it is steeped in living history. Its ancient heritage dates back to pre-Roman times. Nowadays, stone built streets surround a traditional town centre with a restful square at the heart of the community. The town even has a unique time of its own, with a clock based on the 12 different letters in Barnoldswick!

The town is well known for its industrial heritage. Aside from having the highest point of the Leeds and Liverpool Canal, Barnoldswick is famous for being the place where Rolls-Royce developed the jet engine in the second World War. There's also the town's most iconic landmark - Bancroft Mill with its working steam engine with free entry on most Saturdays. It originally drove some 1250 weaving looms and generates over 600 hp.

The lovely countryside continues through this remote and beautiful landscape.
Salterforth off to your left is a small village of narrow streets and terraced houses, there is a childrens playground to the north of Bridge 151 and the lovely Anchor Inn is canalside. It is just under an hour to here from your start point, so an ideal place to stop for the night if you have had a long car journey to get to the start of your Canalboat holiday and need to relax a bit!

Foulridge Wharf, at the northern portal, was built to unload cargoes of raw cotton from North America for weaving in the Lancashire mills. There is a tea-room on the wharf and the New Inn Pub in the village. Foulridge Lower Reservoir, built to supply water to the canal, was constructed almost directly above the tunnel.

Lonely stone farms frame the distant mountains, and soon the Foulridge Tunnel is reached.
Its 1640 yards long and is controlled by traffic lights as follows:

Foulridge Tunnel (Southwest end) -Traffic times Green light; Enter for through traffic - At half past the hour for 10 mins only 30 mins passage time

The Foulridge Tunnel was a major construction achievement, but is today best known for the story of a cow who once swam the whole length of the tunnel. The tunnel is straight enough that you can see right through it, though the roof is quite low in places. Most of it was built using the 'cut and cover' method - but despite this, unexpectedly difficult rock conditions meant that construction took a whole six years. Travel through the tunnel, which has no towpath, is only possible in one direction at a time, so traffic lights control a ten-minute window in each direction each hour.
In 1912, a cow named Buttercup fell into the canal by the southern portal. Rather than wade out as usual, she chose to swim the whole 1640 yards to the northern end, where she was revived with brandy by drinkers in the nearby Hole in the Wall pub which is sadly no longer there.

There are still some attractive terraces of stone cottages in the village of Barrowford which lies a short walk to the west of the locks.

Nelson's centre has been redeveloped and now has a large covered shopping precinct.

Good moorings just south of Bridge 140 together with an attractive children's playground.

Pendle Village mill is located beside the canal between bridges 138 and 139, and is 80,000 sq ft of shopping and also tea rooms with Victorian courtyard, in the site of the old Smith and Nephew textile mill built in 1885.

From Finsley Gate bridge, the Burnley embankment known as the 'Straight Mile” carries the canal 60 feet above the town, and was built around 1796-1801, and remains an impressive construction today and is widely regarded as one of the 'seven wonders' of the British Waterways system.
The excellent shopping centre is about 10 mins walk from Finsley Gate Bridge.

Burnley was once the world centre for cotton weaving. The 2nd half of the 19th century was a busy time for the town and since the 1980's has been the source of much restoration in the Cotton mills,

Cobbled streets of terraced houses run down to the Canal, and old Wharves are gradually being restored , the area between bridges 129b and 130b is one of the best preserveed industrial districts in the country. There are weaving sheds, engine houses, spinning mills and well preserved terraaces of 19th century houses including Slater Terrace, an unusual row of 11 houses above the canal.

The Weavers Triangle Visitor Centre is based at Burnley Wharf on the canal , and you can take a trip back in time and visit a Victorian schoolroom, and Edwardian bathroom and a weaver's dwelling. Open 2-4pm .Sat-Tues
Next to the Visitor centre, there is a pub The Inn on the Wharf.
Oak Mount Mill Engine House is only open on certain days throughout the year.

The Queen Street Mill Textile Museum has the last surviving 19th century steam powered mill- you can see the magnificent steam engine driving over 300 looms in the Weaving shed, Open Tues-Fri 12-5 and Sat from 1 May to 30 Sep.
There are quite a few pubs in the town.

Carry on through Burnley to turn your boat at Rose Grove Services and turn at Old Rose Grove winding Hole, then make your way back to moorings between Bridges 130a and 130b .

It is 6 hours in total from Salterforth to here

It is 5.25 hours back to your mooring at Greenberfield to set off after lunch and have a relaxing cruise back.