COTSWOLDS TOWNS AND VILLAGES FROM STRATFORD UPON AVON

The Cotswolds is an expanse of gently sloping green hills and ancient, picturesque towns and villages in south-western and west-central England. It is a designated as an area of Outstanding Natural Beauty, the largest in the country, with quintessentially English charm .

The most unusual buildings in Tewkesbury are the row of medieval shops near the Abbey, in fact most of the medieval aspects & character of the town have survived to this day.

Pershore – a busy market town with many well kept Georgian buildings with a fine 6 arched 14th century bridge spanning the River, and a magnificent Abbey built on the site of a wooden building erected in AD689.

The old riverside town of Evesham has a few elegant Georgian buildings and half-timbered houses , in the lovely Abbey park you can sit back up soak in the tranquil atmosphere or listen to the bandstand music on Sunday afternoons in the summer.

Stratford upon Avon- this beautiful medieval market town is the 16th century birthplace of William Shakespeare.
Home to the Royal Shakespeare Theatre, and Trinity Church where Shakespeare is buried, and the house where he was born as well as Anne Hathaway's cottage. 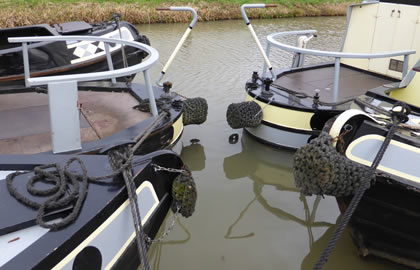 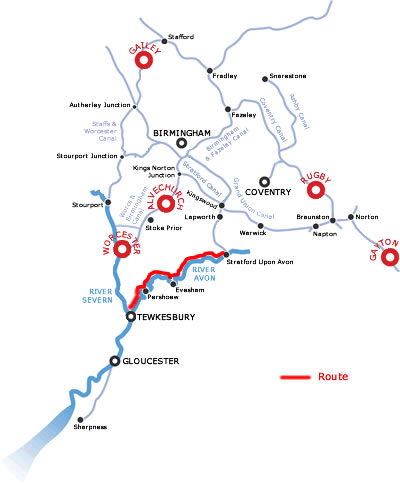 Note that a short term licence is required to navigate the River Avon (currently approx £50) which can be purchased from the lock-keeper. Information about cruising the River can be found on the Avon Navigation Trust website www.avonnavigationtrust.org. All locks on the river are wide, so 2 boats can go through at once.
Mooring on rivers is free in some places, and in others, there is a fee, please look out for notices. When mooring you may have to double up, with 2 boats side by side, and arrive at your mooring early to get a place.

You may decide to spend your first or last night exploring Stratford on Avon itself, this beautiful medieval market town is the 16th-century birthplace of William Shakespeare.
If you do you can stay at the base which is within walking distance of the town, from here you can visit the many pubs, shops and restaurants that the town has to offer, as well of course as the Royal Shakespeare Theatre, and Trinity Church where Shakespeare is buried, and the house where he was born as well as Anne Hathaway's cottage.

If you prefer you can get going and get a few locks under your belt and still moor up in Stratford on Avon in the Bancroft basin.
Your first lock is within sight of the Valley Cruises base at Stratford, One Elm Lock number 52, which then takes you under the road.
3 more locks are to be negotiated before you reach the Bancroft basin, and the last lock before you are on the River Avon is before you. There are notices in the basin telling you where the licence can be purchased.

Either moor for the night here in the Bancroft basin which is about an hour from the Valley Cruises base, or if you wish to get further on the next mooring would be just before Weir Brake (Gordon Grey) Lock (1.5 hrs from base ) or Luddington ( Stan Clover) lock (2.5 hrs from base) on the River Avon , but there are no village pubs nearby, or you could travel to The Four Alls pub in Welford on Avon by Binton Bridges which is about 3 hours from the Valley Cruises base (fee payable unless you moor by Pub ). The multi-arched Binton Bridge is very attractive and the pub is just before this and moorings just after it. Don't travel too far in the evening as the daylight may go and you cannot travel after dusk. There are also free moorings at Welford lock.

Day 2
From Binton Bridges it is just over 5 hours to Evesham, or from Bancroft Basin add 2 hours, or from Valley cruises base add 3 hours.
Welford Lock is soon reached and closer access to the village of Welford on Avon, followed by another couple of locks before you reach Bidford on Avon (2 hrs from Binton Bridges). There is free mooring at the Frog canalside pub, and also the Bridge Riverside Eatery. The village makes a good stop for a good range of shops and takeaways. The bridge here was built in 1482 by the monks, and there is an excellent delicatessen and bakery not too far from the bridge.

Just the village of Offenham is reached before you get to Evesham.

At Offenham Lock there are free moorings, and you may wish to moor here and walk along the canal to the Valley in Evesham- set in 125 acres there are many shops, cafes and restaurants and kids will love the mile-long narrow-gauge railway (open every weekend or during school holidays).

Once Evesham is reached there are free moorings upstream of Abbey bridge on the right bank, and also by Workman gardens.

The old riverside town of Evesham has a few elegant Georgian buildings and half-timbered houses, in the lovely Abbey park, you can sit back up soak in the tranquil atmosphere or listen to the bandstand music on Sunday afternoons in the summer. The Bell Tower is all that remains of a large abbey which was demolished after Henry V111 closed the monasteries in 1540. Also worth a visit is the Heritage centre at the Almonry which is housed in a 14th-century building and which houses a wealth of information and artefacts.

In July every year, Evesham hosts a spectacular weekend- the River Festival- where boats moor alongside Workman Gardens for an illuminated boat festival with fireworks.

Day 3
It is 8.5 hours cruising from Evesham to Tewkesbury.

The River loops around the town of Evesham and care should be taken when approaching Hampton Ferry, where a wire extends across the river – this will be lowered when the ferryman hears 3 long blasts of your horn.
There is a handsome mill at Chadbury Lock with mooring just below the lock. When approaching the Lock the entrance is partially obscured by trees and the weir crest is unmarked and therefore invisible, so slow down and take great care.

At Fladbury the beautiful Mill overlooks the River, be careful as there are ferry wires which stretch across the River and are difficult to see. Fladbury is a picturesque village of half-timbered houses and cottages around the village green, where you will find the Anchor Pub.

The village of Cropthorne sits on higher ground to the left of the canal, and there are a couple of pubs in the village.
Wyre Piddle Microbrewery is north-west of the Anchor Inn, the Inn is the only mooring for the village. The Brewery is famous for its 'Piddle in the Hole' Ale and you can purchase it and other ales in their shop.
There is a shop east of Anchor Inn.

Next reached is Pershore – a busy market town with many wellkept Georgian buildings with a fine 6 arched 14th century bridge spanning the River, and a magnificent Abbey built on the site of a wooden building erected in AD689.
Craycombe farm, just north of Fladbury & Evesham Golf course, is a farm shop where you can buy fresh fruit and veg, local ciders & country wines, and home make cakes & preserves. There is also a gift shop, both are open all year.

The River continues its winding course as it meanders through the countryside around Eckington and Bredon where a fine 14th century barn can be seen from the River.

There are numerous moorings in Tewkesbury and you should moor here and turn reading from the journey home.
Time to explore the historic town of Tewkesbury with its many attractive & ancient buildings including of course, it's cathedral-like Abbey, which is reckoned to be one of the finest Norman churches in the Country. The abbey was completed about 1120, and is splendid both inside & out. Its magnificent and beautifully decorated tower stands at 130 feet high and 46 feet square, and is the largest Norman tower in existence.
The most unusual buildings in Tewkesbury are the row of medieval shops near the Abbey, in fact most of the medieval aspects & character of the town have survived to this day. One of the more unusual aspects of the town is the maze of small alleyways leading off from the main street. There is a couple of museums, and the Tourist information office can tell you more about other attractions.
The Battle of Tewkesbury fought here in 1471 was the penultimate battle in the War of the Roses.
There are many pubs and hotels in Tewkesbury.