CROPREDY AND RETURN FROM RUGBY

A rural route through lovely countryside along the Grand Union Canal and down the Oxford Canal to the small village of Cropredy, which is home every year to a well attended festival of folk and rock music held on the edge of the village, and run by Fairport Convention.


Rugby is a large town with many shops and of course is the home of the game of Rugby. It is 30 minutes walk to the town centre. There is a pedestrianised shopping centre and an open market with a town crier. 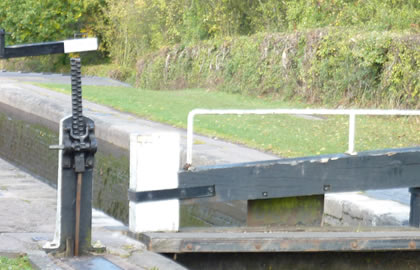 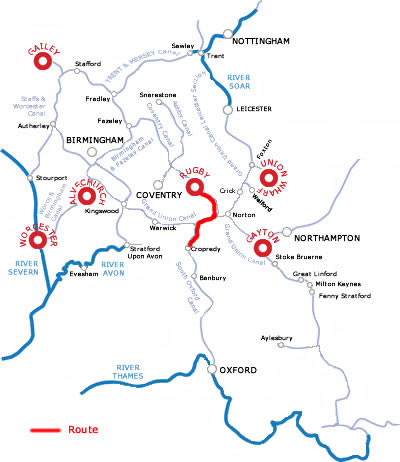 From the marina cruise south down the Oxford canal, leaving Rugby behind.

There are shops to the south of bridge 59 and a picnic area below bridge 58 with a huge Tesco supermarket nearby.

Your first locks are by Hillmorton and you can stop for the night by Bridge 71 where there is Bardsey's Lock stop Cafe bistro, which is open Wednes-Sat for meals or takeaways & has won awards for the best waterside restaurant.

After passing under the M45 motorway the canal leaves all civilisation behind, and does not pass any villages until it reaches Braunston Turn. The village of Braunston is set up on a hill to the north of the canal, and is a very well known canal centre. You make a right hand turn along the Grand Union Canal away from Braunston to rejoin the Oxford canal at Napton junction, where you go straight on instead of turning right.

The windmill on top of Napton hill can be seen from Napton Junction, if you cruise on to Bridge 113 there is a water point and The Folly pub is canalside at bridge 113, and there is a useful shop next door. The shops and pubs are at the bottom of the village, but if you want to climb over 400 feet to the top of the hill you can see the 13th century church, and seven counties can be seen from this vantage point.

It is 6 hours cruising to here

The flight of 8 locks at Napton start first thing this morning, so make sure you all have a good breakfast.

After the locks the canal continues its twisting course, with villages scattered along the way.

Priors hardwick is east of bridge 124 along the footpath, The Butchers Arms is a smart village restaurant.

Fenny Compton is approached from Bridge 136, about 1 mile west of the wharf, the Merrie Lion pub is in the village.

There are 5 locks by Claydon , the village of Claydon is worth a look, because of the Bygones museum access from Bridge 145.-The museum houses a unique collection of antiques and memorabilia gathered together by the owners over a period of sixty years. And you are encouraged to peruse in a free and relaxed atmosphere. There is a replica of a 1920's kitchen,electricians workshop, blacksmith, wheelwright and a boat-builder,1903 Traction Engine, 1912 Steam Roller, Six tractors, a Trailer Fire Pump and many smaller machines and equipment and steam engines.

There are another 4 locks before you reach the quiet village of Cropedy, which bursts into life during the annual Folk Festival, now Europe's largest, which is held on the 2nd weekend in August. It originally started in 1979 when Fairport Convention held their farewell concert here.


Cromwells forces came under attack at the battle of Cropedy in 1644, and the Royalist cavalry managed to defeat the Roundheads despite being outnumbered, and thus protected Oxford.

In the village is the Red Lion- a beautiful 15th century pub opposite the church, also the Braenose Arms is canalside.

It is 9.5 hours cruising to here


Return to the marina