The canal was designed by John Smeaton and construction started in 1768 after delays, due to funding problems, the canal was finally completed in 1790. The canal linked the two main commercial rivers of Scotland The Forth and The Clyde. Originally The Forth and Clyde Canal was constructed to accommodate sea going boats and consequently the locks are 60 feet long and 20 feet wide.

THINGS OF INTEREST ON ROUTE
Falkirk Wheel - The Falkirk Wheel has become known as the Eight Wonder of the Waterways and is a significant landmark raising above the Carron Valley. Rising 115 feet into the air this unique engineering feat carries canal boats to and from the Union and Forth and Clyde Canal.

Auchinstary - Situated on the banks of the Forth and Clyde Canal between the town of Kilsyth and the village of Croy. At Auchinstary Marina you will find visitor moorings and the Boat House pub and restaurant. There is also a picnic area beside the canal for those glorious summer days.

Dumbreck Marsh - The Marsh is an open area and includes ponds and large areas of grassland.

It was once a derelict industrial area but now it is home to grassland birds, including lapwing and skylarks, and the Water rail.

Possil Loch – Is a shallow freshwater Loch situated in the centre of Possil Marsh. The areas of wet willow woodland, marsh swamp and fen makes it an important staging post in the spring and autumn for warblers and wildfowl.

Croy Hill Roman Fort - Is one of the small forts built along the length of the Antonine Wall. Also Roman sites found along the wall in the area are Castle Hill Iron Age fort, which was constructed more than 2000 years ago and Barr Hill Fort and Roman Bath House which are among the best Roman remains on the Wall. Enough of the floor of the bath house remains to understand how Roman central heating worked.

PLACE TO VISIT
Kilsyth is a pretty Scottish market town offering a pedestrianised Main Street with a wide range of local and specialist independent shops. There is a good choice of places to eat and drink and the local restaurants include a European, Indian, Chinese and traditional English. Townhead reservoir, known locally as Banton Loch is the site of the Battle of Kilsyth and is the main reservoir for the Fort and Clyde Canal. Kilsyth also has a public swimming pool and a range of recreational facilities, parks and gardens.
Kirkintilloch is situated about 8 miles from Glasgow on the Forth and Clyde Canal and is the administrative centre of the East Dunbartonshire. Kirkintilloch was a "dry town" for much of its recent history with the sale of alcohol on public premises banned from 1923 until 1967.

Thankfully nowadays a host of cafes, bars and fine restaurants can be found in the town. Kirkintilloch has a large town centre offering a good range of shops, including the Regent Shopping Centre, supermarkets, banks and Post Offices.

Bowling is at the western end of the Forth and Clyde Canal, where the custom house stands. Pontoons are available in the canal basin for visitors making their way along the canal. The natural inlet at Bowling together with its location at the junction with the canal gave way to a harbour development and suitable site for shipbuilding and repairs. The Littlemill distillery is quite possibly the oldest malt whisky distillery in Scotland, with roots going as far back as ca. 1750,until the 1930's the traditional triple distillation was used at Littlemill.

The centre of Bishopbriggs is known at 'The Village' or Bishopbriggs Cross and is principally a Triangle Shopping Centre. The town has a large sports centre, known as the 'Leisuredrome', which opened in 1975 and is one of the best equipped facilities of its kind in Scotland.

Glasgow is hailed as one of the liveliest and most cosmopolitan destinations in Europe and is a centre of style and vitality set against a backdrop of outstanding Victorian architecture. The city is full of museums and art galleries including a museum dedicated to the work of one of the city most famous residents Charles Rennie Mackintosh. Glasgow is split into two distinct areas the West End is a vibrant area offering retro clothing stores, small boutique craft and food stores as well as some great Glasgow restaurants. Ashton Lane and Cresswell Lane are filled with bars and restaurants that come alive in the evenings. 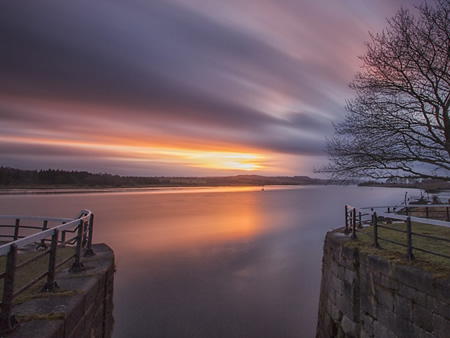