You can do this route from :
Reedley Marina.

Lovely countryside through this remote and beautiful landscape.

Barnoldswick is steeped in living history. Its ancient heritage dates back to pre-Roman times. Nowadays, stone built streets surround a traditional town centre with a restful square at the heart of the community

The Yorkshire Dales National Park borders parts of the Canal. Some of England's finest walking country is contained in this area of fine views, deep valleys , open moorland and rugged hills.

Gargrave is a much visited attractive village with some pretty stone cottages. 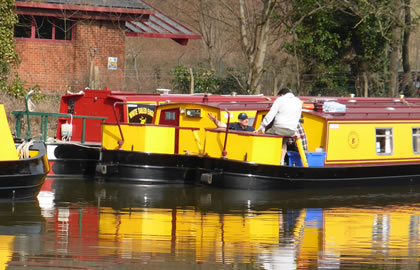 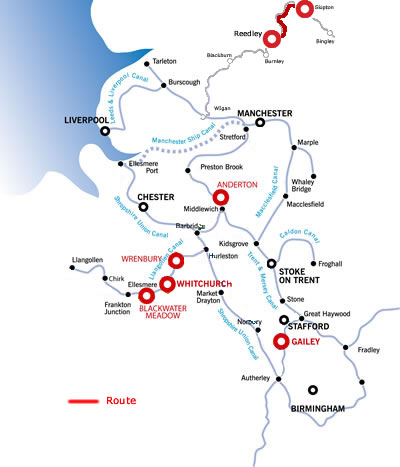 
Pendle Village mill is located beside the canal between bridges 138 and 139, and is 80,000 sq ft of shopping and also tea rooms with Victorian courtyard, in the site of the old Smith and Nephew textile mill built in 1885.

Good moorings just south of Bridge 140 together with an attractive children's playground.
The canal winds it way following the hillside but at Nelson it crosses the valley on a minor aqueduct and begins to climb the pretty Barrowford locks and passes Barrowford reservoir.

Nelson's centre has been redeveloped and now has a large covered shopping precinct.

There are still some attractive terraces of stone cottages in the village of Barrowford which lies a short walk to the west of the locks.

Moor at Barrowford Visitor moorings for the night, it is 2.5 hours to here.

Lonely stone farms frame the distant mountains, and soon the Foulridge Tunnel is reached.
Its 1640 yards long and is controlled by traffic lights.
The Foulridge Tunnel was a major construction achievement, but is today best known for the story of a cow who once swam the whole length of the tunnel. The tunnel is straight enough that you can see right through it, though the roof is quite low in places. Most of it was built using the 'cut and cover' method - but despite this, unexpectedly difficult rock conditions meant that construction took a whole six years. Travel through the tunnel, which has no towpath, is only possible in one direction at a time, so traffic lights control a ten-minute window in each direction each hour.
In 1912, a cow named Buttercup fell into the canal by the southern portal. Rather than wade out as usual, she chose to swim the whole 1640 yards to the northern end, where she was revived with brandy by drinkers in the nearby Hole in the Wall pub which is sadly no longer there.
Foulridge Wharf, also at the northern portal, was built to unload cargoes of raw cotton from North America for weaving in the Lancashire mills. There is a tea-room on the wharf and the New Inn Pub in the village. Foulridge Lower Reservoir, built to supply water to the canal, was constructed almost directly above the tunnel.

The lovely countryside continues through this remote and beautiful landscape.

Salterforth off to your right is a small village of narrow streets and terraced houses, there is a childrens playground to the north of Bridge 151 and the lovely Anchor Inn is canalside.

Barnoldswick is set away from the canal to your left - it is steeped in living history. Its ancient heritage dates back to pre-Roman times. Nowadays, stone built streets surround a traditional town centre with a restful square at the heart of the community. The town even has a unique time of its own, with a clock based on the 12 different letters in Barnoldswick!
The town is well known for its industrial heritage. Aside from having the highest point of the Leeds and Liverpool Canal, Barnoldswick is famous for being the place where Rolls-Royce developed the jet engine in the second World War. There's also the town's most iconic landmark - Bancroft Mill with its working steam engine with free entry on most Saturdays. It originally drove some 1250 weaving looms and generates over 600 hp.

The Greeber top lock starts the long descent into Leeds.

The scenery is still beautiful, with countless hillocks and distant mountains, as the canal twists and turns along its meandering path.
Moor near the small village of East Marton, there are Moorings on the right, and the Cross Keys Inn awaits you on the left bank, also the Abbots Harbour a cosy restaurant serving home cooked food just past bridge 162 on the left, or via a lane by the Cross Keys.
The 268 mile long Pennine way joins the towpath for a short distance here, you will notice that the stones here abound with fossils.

The 6 Bank Newton locks interrupt the outstanding scenery with excellent views across the valley to the hills and moors beyond.

The canal crosses the river over the stone built Priest Holme aqueduct and more locks take you around Gargrave.
Locks 41-30 require a Handcuff key which should should have in a cupboard in the boat, or hanging up.

The Yorkshire Dales National Park borders the Canal. Some of England's finest walking country is contained in this area of fine views, deep valleys , open moorland and rugged hills.

Gargrave is a much visited attractive village with some pretty stone cottages.
There are various pubs and local stores.
Moor here for the night it is 6 hours from Barrowford