HAMPTON COURT PALACE AND WINDSOR CASTLE FROM CAVERSHAM ALONG THE THAMES

This route is packed with history, from Henley on Thames, to Windsor castle and Hampton Court Palace

Henley is a fine market town and the main street runs down to the River Thames. The famous Henley Regetta is held in the 1st week of July. There is a River and rowing museum just outside Henley. Exhibits include the worlds oldest rowing boat.

Cruise to the Royal town of Windsor and visit its famous castle and Legoland .Windsor castle is the largest inhabited castle in the World, established by William the Conqueror during the 1070's the present castle was started by Henry 11 during 1165-1179. It has been meticulously restored after the disastrous fire in 1992.

Discover the magnificence of Henry VIII's favourite royal residence at Hampton Court Palace. Immerse yourself in the sights and sounds of the bustling Base Court and marvel at the breath-taking grandeur of Henry's State Rooms. Stroll through over 60 acres of enchanting gardens, lose yourself in the famous maze and appreciate the beauty of one of the greatest palaces on earth.

Along the way you pass Legoland and Thorpe Park so you can keep the kids busy, whatever their age! 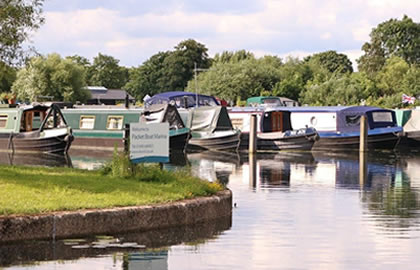 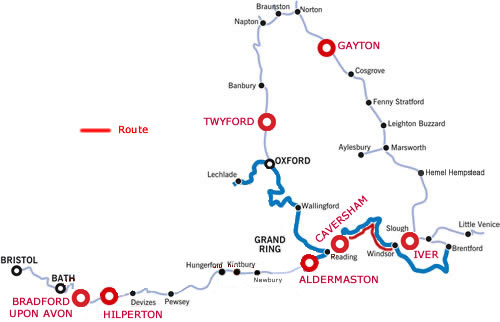 Passing the large water filled gravel pits on your left, you will soon reach Sonning Lock.

At Sonning Bridge use the central arch and go slowly.

The Village, which lies back from the River, is a pretty meticulously preserved village & has a PO, stores, pubs and cafe. There is mooring beyond Sonning Bridge see link here for details : https://www.thamesvisitormoorings.co.uk/moorings/Sonning/

The Great house Hotel lies beside the Thames , with fine gardens and lawns, one dining room is 700 years old, and the main bar is a beamed room with stone fireplace, the Ferryman's Bar has a choice of real ales and meals, there are also moorings here.

The river continues weaving its way through a series of islands to Shiplake lock.

Beyond Marsh Lock the famous rowing town of Henley on Thames is reached. There is mooring before and after Henley bridge see link here for details : https://www.thamesvisitormoorings.co.uk/moorings/Henley-Town-Moorings/

This is a good place to moor up for the night, it is nearly 3 hours cruising to here.


Henley has an attractive waterfront, many moored boats and resident swans.

Henley is a fine market town and the main street runs down to the River Thames. The famous Henley Regetta is held in the 1st week of July. There is a River and rowing museum just outside Henley. Exhibits include the worlds oldest rowing boat see website.

Also in Henley is Fawley Court which was designed by Wren & built in 1684, with grounds by Capability brown. It has a library with various documents of the Polish monarchy and Polish militaria.


Alternatively if you did not leave the marina until later and want a closer mooring, after a couple of hours from leaving Caversham you will reach the Wargrave moorings at Lower Shiplake:
https://www.thamesvisitormoorings.co.uk/moorings/Henley-Town-Moorings

Wargrave overlooks the Thames, and the striking Woodclyffe Hall in the High Street was often visited by the novelist Henry Kingsley. The Church here was burnt down in 1914 by the suffragettes. There are 3 pubs in this small town.

Leaving Henley the River passes Hambleden (moorings) and Hurley, a small village that has a couple of pubs.

At Marlow you will see the elegant white Marlow suspension bridge with the lock just beyond. There are moorings before the bridge,see the link here : https://www.thamesvisitormoorings.co.uk/moorings/Marlow/

This part of the Thames is very popular for sailing so watch out for all the pleasure craft.

Marlow is without a doubt one of the loveliest locations on the River Thames, set amongst the rich meadows of the river valley and alongside the woodlands of the Chiltern Hills.

The vibrant Georgian market town is made up of historic streets and an abundance of boutique shops, restaurants, cafes and bistros all adding to the town’s unique charm.

The towns most famous landmark is the suspension bridge which spans the River Thames and joins the counties of Buckinghamshire and Berkshire.

The bridge was designed by William Tierney Clark and first opened in 1832. Marlow has always been known as a fashionable riverside resort and attracted many famous people to the area.

Residents of the town have included Thomas Love Peacock, Jerome K. Jerome, T.S. Eliot and Mary Shelley who finished her gothic masterpiece Frankenstein while living in the town.

Marlow is also home to one of Britain’s most premier rowing clubs which has produced many Olympic oarsmen including Sir Steve Redgrave whose statue stands in Higginson Park.

Dine at The Hand & Flowers, the first gastropub to hold two Michelin stars, located on West Street. Choose one of the award-winning beers brewed locally in Marlow Bottom by the Rebellion Beer Company

Take a walk in the award winning Higginson Park. Set in 23 acres of lawn beside the River Thames and Thames Path the park has a great facilities for all the family to enjoy including a large playground, cafes, skate park, a brick in grass maze, mini golf (summer holidays only) and boat hire.

Walk the Thames Path from Higginson Park upstream to Temple or Hurley lock or downstream to Cookham or Bourne End.

Explore the wildlife and World War One training trenches at Marlow Common.

Marlow Town Regatta and Festival takes place every June featuring a traditional rowing regatta on the Saturday with a family fun, canoe regatta and dragon boat race competition on the Sunday.

It is 3 hours from Henley to here.

At Bourne End the river is very wide and favoured for sailing , but beware below Cookham Bridge where the river splits into 4, make sure you take the clearly marked lock cut.
There are moorings at Cookham March Meadow see link here : https://www.thamesvisitormoorings.co.uk/moorings/Cookham-Marsh-Meadow/

Emerging from the cut you reach the lock with a steep thickly wooded hillside which marks the grounds of Cliveden owned by the National trust. Nowadays you can only appreciate this former home of the Astor family from the beautiful gardens, see website for opening times.

Soon Maidenhead is reached, and the riverside is busy and attractive. There are moorings beyond Boulters Lock, or Maidenhead Railway bridge. Maidenhead is a dormitory surburb of London with much new development, and has many shops, pubs and restaurants.

It is 8 hours cruising to here

Beyond Bray Lock & The M4 bridge, is Monkey island with its smart Hotel, but which was once the fishing lodge and pavilion of the 3rd Duke of Marlborough built in 1744 on rubble salvaged from the Great Fire of London . To the north of Summer Leaze bridge is Dorney Court and Church, a gabled and timbered Tudor manor House built c.1440. The house has many original features and contains fine furniture and paintings.

The outskirts of Windsor are reached, the racecourse on your right is the only figure of 8 course in the country. There are horse racing fixtures throughout the year.

There are moorings before or after Windsor railway Bridge, Windsor is to the south of the River, Eton to the North.
It is 8 hours cruising from Henley to here.
It is 2.5 hours from Maidenhead to here,
Also see moorings link here : https://www.thamesvisitormoorings.co.uk/moorings/Windsor-Road-Bridge/

Explore Windsor:-
The main street of Windsor curves around the castle and is full of pubs, shops, restaurants and souvenir shops. Windsor castle is the largest inhabited castle in the World, established by William the Conqueror during the 1070's the present castle was started by Henry11 during 1165-1179. It has been meticulously restored after the disastrous fire in 1992, and includes:
Magnificent State Apartments furnished with treasures from the Royal Collection
• St George's Chapel (one of the most beautiful ecclesiastical buildings in England and the burial place of 10 monarchs)
• Queen Mary's Dolls House, a masterpiece in miniature
• The Drawings Gallery featuring an exhibition (see below for current display).

LEGOLAND Windsor is a theme park dedicated to children aged 3-12 years old. An inspirational land where the kids are the hero. It's a family attraction like no other - where the fun never stops and imagination knows no bounds. With over 55 interactive rides, live shows, building workshops, driving schools and attractions, all set in 150 acres of beautiful parkland, LEGOLAND Windsor is a unique family theme park.

Across Windsor bridge is Eton, the long and rambling High Street is a pleasant place to walk, Eton College was founded in 1440 by Henry VI and 18 former Prime Ministers have been educated here.

There are fine views across the park to Windsor between the Victoria and Albert bridges, below the last bridge the navigation passes Ham Island now a bird sanctuary, to Old Windsor Lock towards Runnymede . The Magna Carta Memorial can be seen through the trees.
At Penton Hook marina which is approached below the lock, it is possible to get overnight mooring and a short distance away is the mega theme park- Thorpe Park - Thorpe Park is not for the faint‑hearted. It has some of the biggest roller coasters in Europe and the rides here are built to scare. It is perfect for adrenalin junkies.

The river twists and turns past Chertsey and Weybridge, although the Desborough Cut removes some of the twists and turns. The River Wey joins the Thames here.
Walton on Thames is on your right, Shepperton and its famous film studios are to the north near the vast reservoir.
Sunbury Court Island is lined with immaculate chalets and bungalows. Below Hampton Bridge is Hampton Court Palace, close to the river but protected from it by a long red brick wall.
Discover the magnificence of Henry VIII's favourite royal residence at Hampton Court Palace. Immerse yourself in the sights and sounds of the bustling Base Court and marvel at the breath-taking grandeur of Henry's State Rooms. Stroll through over 60 acres of enchanting gardens, lose yourself in the famous maze and appreciate the beauty of one of the greatest palaces on earth.

Day 4 onwards
It is just over 19 hours back to the marina, so 3 days cruising, but if you are on a 10/11 or 14 nights trip you will have taken your time to get here and get back again as there is much to see and do and admire.