KEIGHLEY AND THE YORKSHIRE DALES FROM BARNOLDSWICK

You can do this route from :
.

Skipton is probably the most handsome town along the Leeds and Liverpool canal and known as the gateway to the magnificent Yorkshire Dales.
With its famous 900-year-old castle, romantic ruined priory and historic cobbled High Street, Skipton is endlessly rich both in history and outstanding natural beauty.

The Embsay & Bolton Abbey Steam Railway is a heritage railway 1 mile north of Skipton, catch a bus from the town centre. A 4-mile round trip either steam or diesel-powered.
The preserved railway was part of the former Midland Railway route from Skipton to Ilkley.

The Keighley and Worth Valley Railway is a 5-mile-long branch line that served mills and villages in the Worth Valley and is now a heritage railway line. It runs from Keighley to Oxenhope. The line was made famous by the film The Railway Children.

The train stops at the lovely village of Haworth which is best known as the home of the literary Bronte sisters who lived with their father in the local parsonage. 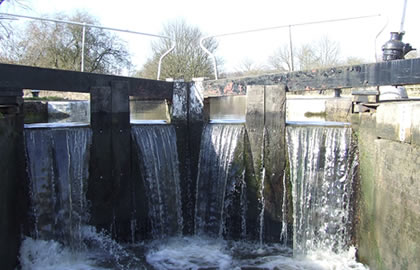 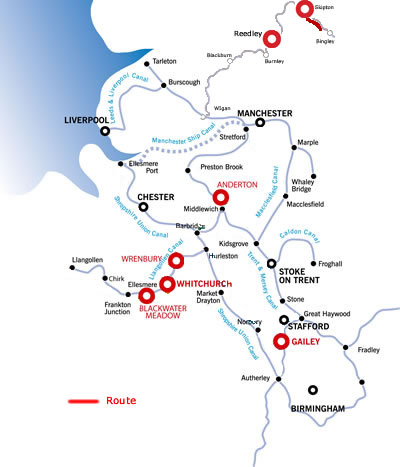 The scenery is beautiful, with countless hillocks and distant mountains, as the canal twists and turns along its meandering path.
The small village of East Marton has Moorings on the right, and the Cross Keys Inn awaits you on the left bank, also the Abbots Harbour a cosy restaurant serving home-cooked food just past bridge 162 on the left, or via a lane by the Cross Keys.
The 268 miles long Pennine way joins the towpath for a short distance here, you will notice that the stones here abound with fossils.

The 6 Bank Newton locks interrupt the outstanding scenery with excellent views across the valley to the hills and moors beyond.

The canal crosses the river over the stone-built Priest Holme aqueduct and more locks take you around Gargrave.
Locks 41-30 require a Handcuff key which should have in a cupboard in the boat or hanging up.

The Yorkshire Dales National Park borders the Canal. Some of England's finest walking country is contained in this area of fine views, deep valleys, open moorland and rugged hills.

Gargrave is a much-visited attractive village with some pretty stone cottages.

There are various pubs and local stores, moor before lock 32 at the visitor moorings.

It is 4 hours cruising to here


The canal now turns south-east towards Skipton with open countryside and moorland topped hills and begins a 17-mile lock-free pound (after lock 30). However, there is an abundance of swing bridges that require a Handcuff Key and some that require a Watermate Key!!

Skipton is probably the most handsome town along the Leeds and Liverpool canal. You can moor about one minute walk away from the centre. As the gateway to the magnificent Yorkshire Dales, people travel the length and breadth of the country to visit this charming market town.

Skipton Castle is a magnificent Norman castle with 17th-century additions that dominates the High Street. The 6 massive round towers have survived since the 14th Century. Open daily 10-6pm. Over 900 years old, Skipton Castle is one of the most complete and best-preserved medieval castles in England and is well worth a visit at any season of the year.

Visitors can explore every corner of this impressive history-rich castle, which withstood a three-year siege during the Civil War. View the Banqueting Hall, the Kitchen, the Bedchamber and Privy. Climb from the depths of the Dungeon to the top storey of the Watch Tower.

The Embsay & Bolton Abbey Steam Railway is a heritage railway 1 mile north of Skipton, catch a bus from the town centre. A 4-mile round trip either steam or diesel-powered.
The preserved railway was part of the former Midland Railway route from Skipton to Ilkley.

On leaving Skipton the canal continues down the valley of the River Aire, with breathtaking views.

The village of Bradley has an attractive waterfront, and there is a pub the Slaters Arms ¼ mile up the hill, take the 1st turning on the right over the lift bridge. Visitor moorings on the towpath side only.

The village of Kildwick has some nice restored Canal buildings, now private residences. There are good moorings here. The streets are extremely steep and one goes under the canal. Kildwick is steeped in history, St Andrew’s is a historically significant church. Fragments of 9th-century crosses have been excavated from its walls, evidence of the Anglos Saxon church built here before the Norman Conquest.

Silsden is to the west of Bridge 191a, a well-contained stone-built industrial town with attractive canal wharves and an old corn mill dating from 1677. It is close to the Yorkshire Dales, and there are plenty of shops near the canal. Silsden was mentioned in the 1086 Doomsday Book (Siglesdene) as the most important village in Craven. Industry came with the canal and the Industrial Revolution. The town hosted a number of mills none of which now operate in their original form.

Moor for the night here it is 6.5 hours to here.

The green wooded hills hide the town of Keighley, and the constant succession of lift bridges impede the boats progress. All require a handcuff key.

There is a store just south of Bridge 197 and an attractive mooring by woods to the east of Bridge 195.
Compared with other industrial towns Keighley is a clean and pleasant town with a large new shopping centre.

The Keighley and Worth Valley Railway is a 5-mile-long branch line that served mills and villages in the Worth Valley and is now a heritage railway line. It runs from Keighley to Oxenhope. The line was made famous by the film The Railway Children.

The train stops at the lovely village of Haworth which is best known as the home of the literary Bronte sisters who lived with their father in the local parsonage. Charlotte, Emily and Anne Bronte, were the authors of some of the greatest books in the English language. Haworth Parsonage was their much-loved home and Jane Eyre, Wuthering Heights and The Tenant of Wildfell Hall were all written here. Haworth Parsonage, next to the interesting churchyard, is now a museum known as Bronte Parsonage Museum.It has 19th century furniture and personal mementoes of the family. The dining room is furnished with pieces bought by Charlotte Bronte from her royalties from Jane Eyre. It is set out just as when the three sisters discussed their literary projects in the evenings.

Set between the unique village of Haworth and the wild moorland beyond, this homely Georgian house still retains the atmosphere of the Brontes time. The rooms they once used are filled with the Brontes' furniture, clothes and personal possessions. Here you can marvel at the handwriting on their tiny manuscript books, admire Charlotte's wedding bonnet and imagine meeting Emily's pets from her wonderfully lifelike drawings. Gain an insight into the place and objects that inspired their works.

The writing desks belonging to the three sisters are always on display, and their other personal possessions are changed on a yearly basis so that you can always be sure of seeing something new.

Cliffe Castle in Keighley was originally the home of Victorian millionaire and textile manufacturer Henry Butterfield and built in the 1880s. Visitors can see sparkling Victorian rooms and furniture, paintings, and decorative art. Special galleries deal with natural history, archaeology and social history and there is an internationally important display of stained glass by Morris and Co.

Turn the boat at Stockbridge winding hole just before Stockbridge Swingbridge 197, and make your way back to Skipton to moor for the night there, total journey time is 7 hours.