LEICESTER AND RETURN FROM MARKET HARBOROUGH

You can do this route from :
Union Wharf.

Visit the new visitor Centre of Richard III in Leicester and follow the story of the most ambitious archaeological projects ever attempted: no less than a search for the lost grave of King Richard III. The last English king to die in battle.
Incredibly, the excavation uncovered not only the friary of Grey Friars but also a battle-scarred skeleton with spinal curvature. On 4th February 2013, the University announced to the world's press that these were the remains of King Richard III.

Cruise to the NATIONAL SPACE CENTRE- close to Belgrave Lock 44. www.spacecentre.co.uk . A great day out for the whole family is at The National Space Centre. View the space age building as you approach from you narrowboat. The opportunity to explore many facets od space travel, to meet the furthest reaches of our universe face to face & to interact with both science fact & science fiction. 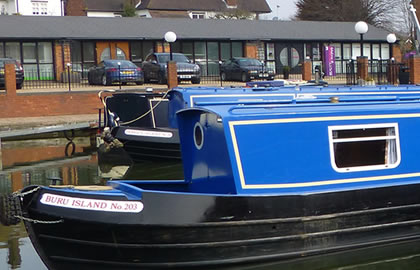 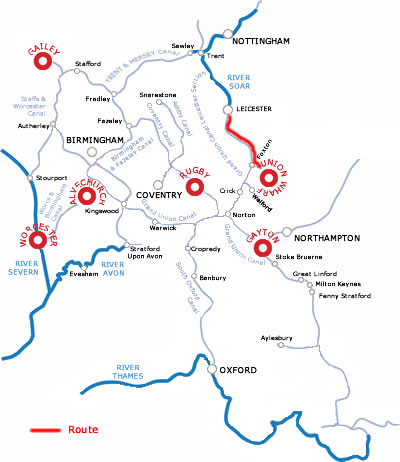 The marina at Union Wharf has been redeveloped by British Waterways over the last two years. The marina is located at the northern end of Market Harborough - a quaint, traditional English market town that dates from 1203. You can enjoy delicious food and fine ales in the town's historic coaching inns or just potter around the market and the fine selection of family owned shops. From Union Wharf it’s just two hours cruising to the 'Leicester Line' of the Grand Union Canal.

Market Harborough – A market town mid way between Leicester and Northampton. Visit Welland Park, the town’s museum and the old grammar school, a 17th school built on stilts. Visit nearby Rockingham Castle built by William the Conqueror. If you need to entertain the children then visit Wicksteed Park one of the biggest and best playgrounds in Europe.
The town has may nice pubs, and shops. there is a antique and collectors market every Sunday in the market hall.
Eat at the Italian Restaurant based at Union Wharf Marina. Open 12-14.15 & 18.00 til late.

The Old Union Canal Society gives guided walks along the canal during summer months and follow the historic town trail.
You are welcome to stayed moored up in the Marina and use the car or public transport to visit the many local attractions.
The Grand Union canal boasts an extraordinary variety of wildlife, from feeding herons, and hunting owls, to water voles. A number of diverse species thrive in this tranquil and often unique environment.

The base at Union Wharf Marina is at the end of the Market Harborough Arm, & you need to cruise for about 2 hours (5 ½ miles) to get back on the main Grand Union Canal.
It is a lovely rural cruise to Foxton which is at the base of the lovely Foxton flight of locks.

Foxton is the site of a steam powered Inclined Plane, which replaced ten locks and lifted narrow boats 75 feet. It was opened in 1900 but suffered from mechanical and structural problems. The locks were reopened in 1908 and now work beautifully. Whilst here visit the Foxton Museum and gift shop. The well stocked canalside shop offers you groceries, hardware as well as the traditional “roses and Castles” canalware, made and hand-painted on site.

Stop for a cream tea in the canal side cafe or a well deserved pint in the Foxton Locks Inn. Spend a couple of hours watching the colourful narrow boats passing through the staircase locks. British Waterways organise events based on Foxton Locks.

Once you reach the main Grand Union Canal at Foxton, you might want to moor up for the night as there is a nice pub by the Foxton Locks. You will be turning right away from the Foxton Locks, there might be more moorings around the corner.

Cruising north will take you towards Leicester and you can visit some of the pretty towns and villages on the way. The canal section just before Leicester is very rural, surrounded by pleasant, typical English countryside.

Soon you will pass through Saddington Tunnel which is 880 yards long, lookout for the bats which naturalists enthuse about. The Tunnel was built crooked in 1797.
Just a mile or so away is the village of Saddington, the award winning pub - Queens Head in the main street has superb views over Saddington reservoir, and serves a wide range of food. Visit Saddington reservoir built to keep the canal well watered now a wildlife haven

After the tunnel you will see the small town of Fleckney, about 10 mins walk from Bridge 73. There is a takeaway, stores & a bakery, chemist & off licence here. The Old Crown west of Bridge 73 serves food.

The first locks you reach are the Knibworth Locks, in fact there are 5 locks to negotiate along this stretch. Visit the Wistow Rural Centre www.wistow.com moor up at either bridge 78 or 80 for access. Call into the tea rooms for a traditional English tea, a light snack or a 3 course lunch - children's menus also available. Then stroll around the model village and the garden centre.
Wistan Le Dale model village- take the footpath south from Ivy Bridge (78) to the church and visit this acclaimed Model Village. Open daily exc Tues, with cafe.
The tunnel, bridges and locks which begin the descent into Leicester provide plenty of Canal interest.

Brocks Hill Country Park & Environment Centre is a 2 & halfmile walk north along a footpath from Clifton Bridge (85) & then via A5199 & B582, but it is well worth the effort as it make a very worthwhile day out. It is a unique environment centre built to demonstrate wind & solar power. Set in 67 acres of parkland with a cafe. Entrance is free.
The navigation follows the north westerly course of the River Sence, until you reach Kilby Bridge (87) where indications of the City of Leicester begin. there is a good pub here.- The Navigation Inn a friendly pub serving real ales & food.

About half a mile north of Kilby Bridge is the award winning Wigston Framework Knitters museum. open every Sunday.

The navigation from Blaby into Leicester runs through a linear Country park & mostly parallels the off road cycleway along an old railway track.
Moor up just before Blaby bridge 98 , the town is to your south, and has all the usual facilities.

Aylestone off to the right still retains the feel of a country village with narrow streets and pretty brick cottages.There are tearooms here besides the lock. The gas museum www.gasmuseum.co.uk is situated in a Victorian gatehouse in one of the city's first gasworks.

East of Packhorse Bridge 105 (fork left up Sanvey lane, then left) is the Black Horse. The Union Inn is east of Freestone bridge 106. The canal follows the River Sence to its junction with the Soar, sometimes they share the same bed, and because of this flooding can occur after heavy rainfall. Watch out for signs and for the enormous weir just above Freemans meadow lock where the Canal & the River Soar meet.

The Canal enters Leicester along a pleasant cutting, a variety of buildings line the canal banks and a series of ornamental bridges lead straight into the town centre by the West bridge, making this a lovely route into Leicester considering it is a large City.

There are secure moorings at Castle Gardens (on the right past Newarke Bridge 2). The city centre is remarkably compact with everything surprisingly close to these moorings.

If you are on a 4 night trip, turn just past Newarke Bridge by the moorings or before Limekiln Lock 43.
Continue back to Kilby Bridge and moor up just before Kilby Bridge.There is a pub canalside.
The whole day will take 8.75 cruising hours.

What to see and do in Leicester :
Visit the new visitor Centre of Richard III in Leicester and follow the story of the most ambitious archaeological projects ever attempted: no less than a search for the lost grave of King Richard III. The last English king to die in battle.
Incredibly, the excavation uncovered not only the friary of Grey Friars but also a battle-scarred skeleton with spinal curvature. On 4th February 2013, the University announced to the world's press that these were the remains of King Richard III.

NATIONAL SPACE CENTRE- close to Belgrave Lock 44. www.spacecentre.co.uk . A great day out for the whole family is at The National Space Centre. View the space age building as you approach from you narrowboat. The opportunity to explore many facets od space travel, to meet the furthest reaches of our universe face to face & to interact with both science fact & science fiction. Open Tues -Sun all year & Mon pm -school hols.

Golden Mile- an area centred on Belgrave Rd., to the north of the city, where the focus lies on the superb range of Asian cultural delights & cuisine. In a large city such as Leicester, there is a wide range of pubs & restaurants , these are near the canal:

Market Place - the Food hall selling fresh meat , poultry, dairy produce & fish from all over the world. Tues - Sat. The retail market with over 300 covered stalls is open also.

Jewry Wall Museum- Collection of the count's archaeology up to the Middle Ages, overlooking the Jewry Wall, which dates from 2nd C & is thought to be part of Roman Baths. Two Roman Mosaic pavements can be seen in situ.
New walk Museum & Art gallery- www.Leicestermuseums.ac.uk you will discover the mighty dinosaurs as you walk in their footprints, be on the lookout for the 'Barrow Kipper' and the Rutland dinosaur.

Newarke Houses Museum- The social history of the area from 1500 to the present day, inc the history of hosiery, costume & lace industries.
Royal Infirmary Museum- history from 1771. Wygston's House Museum of Costume.