Little Venice is home to quirky waterside cafes, cosy pubs, and charming restaurants and boasts some of the most interesting independant theatre venues in London .

London Zoo is the world's oldest scientific zoo. Today it houses a collection of 698 species of animals, with 20,166 individuals, making it one of the largest collections in the United Kingdom.

Nearby tube stations give you access to any part of London, with all the attractions that this great historic city has to offer.

Waltham Abbey is an Essex Market Town, with a rich history and heritage, set in picturesque countryside with a magnificent Abbey, which has its roots in the monastic house founded by King Harold II in 1060 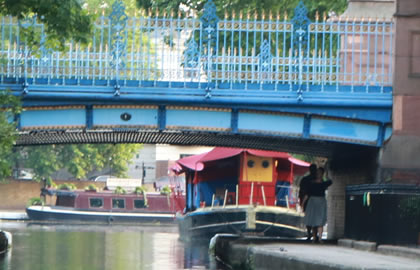 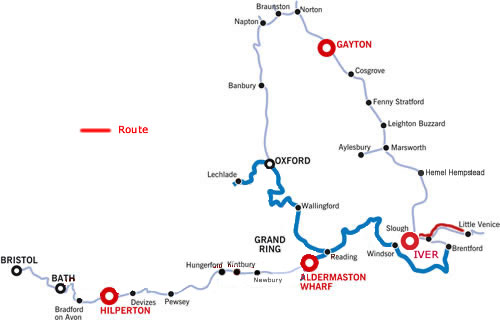 
For Tourist information about London http://www.visitlondon.com

From your mooring cruise to the end of the Slough arm of the Grand Union Canal, at Cowley Peach Junction, and turn right towards Little Venice.
The Slough Arm was almost the last canal to be built in Britain, in 1882, and on the way to Cowley Peach Junction you pass over 3 small aqueducts as you pass over the picturesque Cowley lake.
The main traffic on the Canal is the late 1800's was bricks made from the local clay.

Turning right at Cowley Peachey Junction towards Little Venice and Brentford you pass Yiewsley, West Drayton and Hayes Town, before turning left at Bulls Junction along the Paddington Arm to Little Venice, the main canal goes to Brentford and the River Thames. At this junction there was a large British Waterways yard which is now a 24 hr Tesco Supermarket if you need to stock up on supplies.

At Uxbridge Road bridge 20 you can stop for the night as you will have cruised for 2 hours.
The Hamborough Tavern is canalside .

Continue along the Paddington Arm of the Grand Union Canal .
Horsenden Hill and Perivale Wood provide a long stretch of beautiful hilly parkland along with Greenford Golf Course which adjoins the Canal.
Between bridges 11 and 12 there is a useful Sainsburys supermarket right by the canal with moorings, and again by Kensal Green Bridge, just to the west.

When you reach Little Venice the Paddington basin is straight on, but you will be swinging left.
However if you wish to get into the West End, Covent Garden, or any part of London, Paddington underground (Tube) station is very close and allows you to catch the Tube to all parts of the City. These days if you have a card with touch facility,you don't have to buy a ticket for trains or buses in London, you just touch your card at the beginning and end of your journey and your card will be automatically charged.

There are extensive moorings stretching west at Little Venice, also a pump out, toilets and full boater facilities. Groceries are available nearby.
Little Venice is an oasis of tranquility. It's thought to have been so-named by the poet, Robert Browning.
It is home to many boats, including a floating art gallery, puppet theatre and café.
Lovely picnic spots include the Rembrandt Gardens. Grab your picnic hamper and enjoy the sunshine surrounded by flowers.
Moorhens, Coots, Tufted Ducks, Pochard, Greylag and Egyptian Geese are all common sights on the canal and the local wildlife is never more alive than in the summer months.
It is 3.5 hours cruising to here from Uxbridge Road bridge.
Time to get out and explore!


The Regent’s Canal is one of London’s best-kept secrets - a peaceful haven often hidden by the surrounding buildings.
Locks are padlocked, you will need a Watermate key.
Cruise along the Regents Canal which is tree lined with glorious Regency houses until you reach the Maida Vale Tunnel , check for oncoming boats through the tunnel, as there is only room for one boat .

After the tunnel you can moor by Park Road Bridge 7 .

Regents Park to your right is soon reached.
Regents Park was originally part of Henry V111's great hunting forest in the 16th C.

The Park is surronded by very impressive Regency terraces & Gateways.

Park Road bridge 7 is the best access to Madame Tussauds & the Planetarium and the Sherlock Holmes Museum are along Park Road.

Moor just after Lisson Grove bridge 2 and walk along the canal to Bridge 7.
London Zoo is situated canalside, moor just after footbridge 12 for access to the Zoo near the Cumberland Basin.

London Zoo is the world's oldest scientific zoo. It was opened in London on 27 April 1828 and was originally intended to be used as a collection for scientific study. In 1831 or 1832 the animals of the Tower of London menagerie were transferred to the zoo's collection. It was eventually opened to the public in 1847. Today it houses a collection of 698 species of animals, with 20,166 individuals, making it one of the largest collections in the United Kingdom.

At the Cumberland Basin the canal swings away to your left , there is a large Morrisons Supermarket off to the left as you go over the railway.
A few locks are reached- 3 in a short space of time.

After Camden Lock you will pass Camden market off to your left - Eclectic market with youthful vibe and stalls/shops selling fashion and accessories, music and more.
Close to Maiden Lane Bridge 36 is Kings Cross and St Pancras stations- you can get the tube station there.
Battlebridge Basin is the site of the London Canal Museum.

Islington Tunnel approaches, at 960 yards, the attractive borough of Islington lies to the north of the tunnel, and there are useful shops, a street market and a launderette. This is a one way only no-passing tunnel, even though it is wide you won't know if the oncoming boat is a wide-beam or not! Watch out for unlit boats, canoes, rowing boats etc which can be a menace here.

It is just over 2 hours from Little Venice to Islington Visitor Moorings.

About 2.5 miles and 4 locks takes you to the junction with the Hertford Union Canal , and you turn left here to take the short cut to the Lea Navigation.

There are moorings by Victoria park- Old Ford Lock 8, it is 4 hours to here from Little Venice.

The Hertford Union Canal is 1.25 miles long & was built in 1803 by St George Duckett and is often called Duckett's. It is straight , has 3 locks, and borders the attractive Victoria Park for most of the way, there are also moorings along here.

Turn left at the end of the Hertford Union Canal, onto the Lee Navigation.

This area has been completely re-developed after the 2012 Olympic Games, and the Olympic Stadium is off to your right, and the Queen Elizabeth Olympic Park is in front of you.

The River Lea runs directly through the Park, forking into the waterways that once upon a time served the Victorian industries of Stratford and Hackney.

For over two hundred years, these waterways and the docks they served drove London’s economy, but economic change neglected the waterways, leaving them derelict and ultimately a barrier, rather than a connection, for local communities. After falling out of use in the second half of the 20th century, the waterways were given a new lease of life following the London 2012 Olympic and Paralympic Games. From the titanic 114.5m high ArcelorMittal Orbit, the UK’s tallest sculpture, to the idyllic parklands across the Park, Queen Elizabeth Olympic Park will enthral visitors young and old.


Hackney Marsh is a footballers delight with numerous pitches, as the river approaches Lea Bridge it passes Middlesex Filter Beds Nature Reserve- Whether you want to relax in our large open spaces, pack up a picnic or explore our nature reserve. See what you can spot in the wildlife garden and see the willow dome, or head to the filter beds and bird watch from the hides.
The café is perfect for chilling out with comfy sofas while you enjoy a bite to eat or drink,.
The WaterWorks Centre is just a stone’s throw from other fabulous activities, Lee Valley Ice Centre is just a ten minute walk away and Lee Valley Riding Centre five minutes.

There are moorings at Hackney Marshes it is 5.5 hours to here from Little Venice.

The river now follows the wide sweeping course that is typical of this navigation.
At Walthamstow, about .25 miles north east of Springfield Marina is the old Copper Mill, built 1800 to process copper that was brought from the Port of London along the River lee.

There is plenty of wildlife around here .
Walthamstow Marshes are .5 mile upstream from Lea Bridge , now an SSSi this is the last remnant of the once extensive river marshes.


There are huge reservoirs to the east blocked off by high embankments.
Opposite Warwick Reservoir East is Markfield Beam Engine museum. This Grade II listed building houses a splendid compound beam engine built by Wood brothers around 1886. It has been fully restored and when supplied with steam pumps clean water - it cleaned the sludge from sewage through sand filters, a splendid example of Victorian public health engineering. Open 2nd sunday of each month.

Above Tottenham Lock there are lots of moored craft.

Pickett's Lock name was used for the nearby area. However historically this area was marshy farmland.

Lee Valley leisure centre is to the left and has all sort of sports activities -squash, yoga, swimming and golf, sauna, solarium, multi-screened cinema and restaurant.
Just north of Ponders Lock there is a pub in a former pumping station .
At Enfield Yard are the attractive buildings of the Canals and Rivers Trust yard and Enfield Lock is accompanied by a handsome house built around 1889.
After nearly 4 miles of reservoirs, the landscape, at last, begins to open out.
At Waltham Town Lock is the start of more open country.
Waltham Abbey is a fine old town with an amazing architectural gem in its ancient Abbey, and its pedestrianised streets make it a relaxing place to walk around.
The town goes back before the Norman conquest when King Harold chose it for a centre of learning and religious development.
The Abbey was founded in 1030, and was one of the most important and prosperous in the country.
Turn around just north of Waltham Town Lock and begin your journey home.

It is 4.75 hours to here from Hackney Marshes.