MARKET HARBOROUGH AND RETURN FROM RUGBY

This cruise takes in 2 staircase flights of locks and 3 tunnels, but takes you through lovely rural countryside hardly touching civilisation apart from a few
scattered villages. 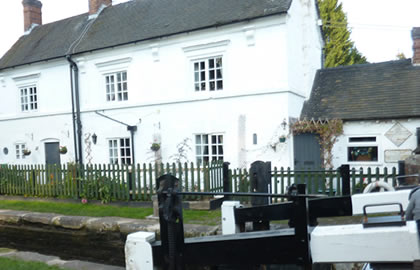 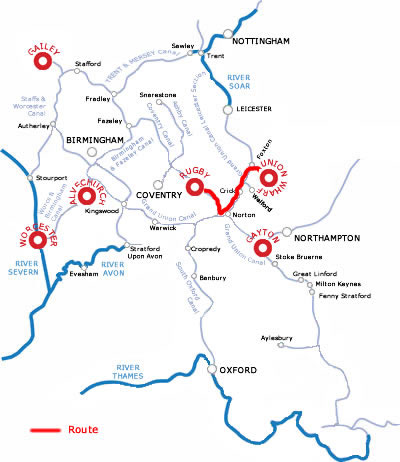 From the marina cruise south down the Oxford canal, leaving Rugby behind.

There are shops to the south of bridge 59 and a picnic area below bridge 58 with a huge Tesco supermarket nearby.
Your first locks are by Hillmorton and you can stop for the night by Bridge 71 where there is Bardsey's Lock stop Cafe bistro, which is open Wednes-Sat for meals or takeaways & has won awards for the best waterside restaurant.

You will need to get to Braunston Bottom Lock by 2.30pm because that is the last entry to the flight of 6 locks, it takes about 4 hours from Hillmorton.

After passing under the M45 motorway the canal leaves all civilisation behind, and does not pass any villages until it reaches Braunston Turn. The village of Braunston is set up on a hill to the north of the canal, and is a very well known canal centre. Turn left at the Junction with the Grand Union canal. Access is from Bridge 91. The Millhouse Hotel has moorings. There are a few shops, & pubs in the village.

Just after Braunston are the Braunston Lock Flight of 6 locks which precedes the very long Braunston Tunnel, which at 2042 yards long is one of the longest in the country. The tunnel opened in 1796 and has a slight S bend. The Braunston Locks are open from 9-4pm daily with the last entry to the flight at 2.30pm. Continue along the Grand Union canal to Norton Junction, and turn left up the Grand Union Canal Leicester section.

You can moor up here, it is 6 hours cruising from Hilmorton to here.

There is a pub just along the canal in the London direction of the Grand Union, called The New Inn at Long Buckby Wharf. There is also a water point near the moorings

From the Norton Junction you pass the Watford Gap motorway services just through a hedge after bridge 5, which provides 24 hour sustenance & provisions if required. Continue north to the Watford Locks. There is a lock-keeper here, and you will have to find him before you can proceed up the locks. The Locks take you up to the summit level of 412 feet, and there are no more locks after this for 20.5 miles. 4 of these locks are staircase locks, where the bottom of one lock is the top of another.

They are set in very pretty surroundings in quiet countryside and are quite exiting to do.

The canal continues its route through rural landscape with a few villages scattered along the way.

Crick Tunnel is soon reached which is 1528 yards long, and the village of Crick is at the end of it, off to the left. There are stores, off licence and pubs in the village and Edwards Restaurant beside bridge 12.

Crick is the home to a well known & popular boat show each year.

Moving north of Crick the scenery alternates between woods and open fields as the canal takes us past Cracks Hill which provides pleasant views back towards Crick and the canal from its summit and doesn’t require too much exertion to climb. In fact, this whole section of the canal lends itself to laziness and relaxation due to the next lock not being encountered until the Foxton Flight or on the Welford Arm, both much further on towards Leicester.

The canal follows a lazy meandering course from here first north before swinging east, south then north again through open lush countryside punctuated by thickets of woodland, very quiet and truly relaxing. The peace and quiet is disturbed temporarily by the busy A14 dual carriageway but the canal passes under at a right angle and soon leaves the noisy road behind, the canal at this point is hemmed in by a thick collar of trees overhanging the water and providing a great feeling of tranquil isolation.

Before long the Welford Junction appears with the 1 mile long Welford Arm leading off to the right to the pretty village of Welford. It is a most welcome diversion as there has been little or no human habitation from Crick onwards and likewise very few pubs or shops to stock up in and sample local ales.

Back on the main route of the Leicester Line you can moor up by Bridge 45, the village of North Kilworth is to the west. There are 2 pubs- The White Lion & the Swan Inn.

It is 3 hours cruising to Foxton Locks and you will need to reach there by 3.15 pm which is the last entry to the flight.

The canal continues through open countryside until the Husbands Bosworth Tunnel, it is approximately a third shorter than the tunnel at Crick at a little over a thousand metres long. The village of Husbands Bosworth lies a short walk to the south from the canal after exiting the tunnel, it is a very idyllic little village surrounded by rolling hills and offering an opportunity to frequent a pub or shop for supplies.

The cruise from Husbands Bosworth up to the Foxton Locks is as quiet, rich in wildlife and scenic as you would come to expect of the Leicester Line by now. The flight of locks at Foxton is comprised of two sets of five locks in staircase form. Due to the congestion here in the past and the need to accommodate wide beamed craft there was an attempt at making an inclined plane boat lift to speed things along which is now defunct, the popular museum and visitor centre here detail the history of the locks. The views over the surrounding countryside are as stunning as can be found anywhere, combined with the interesting setting of the canal a good many people are attracted to Foxton Locks on day trips so be prepared for spectators while navigating the locks.

You will need to find the lock-keeper before you descend the locks.

The village of Gumley lies a short distance to the west, offering a chance to spend some time in a pub to prepare for, or recover from, the hard work entailed in ascending and descending the staircases at Foxton. By the Locks is the Foxton Locks Inn which is open all day. Also by the locks is a small shop stocking essential provisions.

Directly after the Foxton Locks the Market Harborough Arm of the canal turns off to the east going through the middle of the village of Foxton making the pubs and shops there very accessible providing you can find a mooring spot. The Market Harborough Arm twists and turns for just over 5 miles skirting around the north western flank of the town before cutting in towards the centre, ending at Union Wharf.

The basin in Market Harborough is very pleasant, surrounded by modern apartment buildings converted from old warehouses. The Waterfront Restaurant is in the marina , they serve food & coffees 12 noon to 11pm during the summer.

You can moor up here for the night, it is 7 hours cruising to here.

The High Street to the town lies off to the south east, it is only a short walk and after mile upon mile of empty countryside it is somewhat refreshing having a large choice of pubs and shops in this quaint town. The old Grammar School building and church both lend character and a unique quality to the centre of town, it is certainly a place that encourages exploration.

Visit nearby Rockingham Castle built by William the Conqueror. If you need to entertain the children then visit Wicksteed Park one of the biggest and best playgrounds in Europe.