You can do this route from :
Twyford Wharf.

Visit the City of Dreaming Spires and marvel at the unique blend of traditional and modern culture. As well as the beauty of the city's world famous colleges Oxford offers a host of tourist attractions and a vast selection of restaurants and pubs which give this historic city a vibrant and cosmopolitan feel


The city of Oxford was founded in the 10th century and has been a University city since the 13th century.
The University houses the Bodleian library which was opened in 1602, and it contains 9 million books on 176 km of shelving. It is housed in a remarkable group of buildings which form the historic heart of the University, and you can explore the quadrangles of these magnificent structures at no charge.

This route takes you down the River Cherwell valley all the way to Oxford, pasing small villages and passing under quaint lift bridges, and of course with Canalside pubs to keep you refreshed! 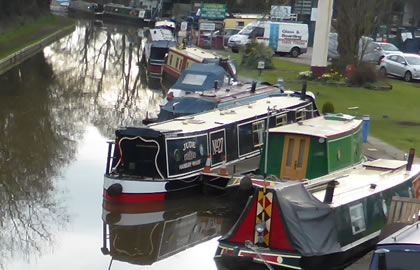 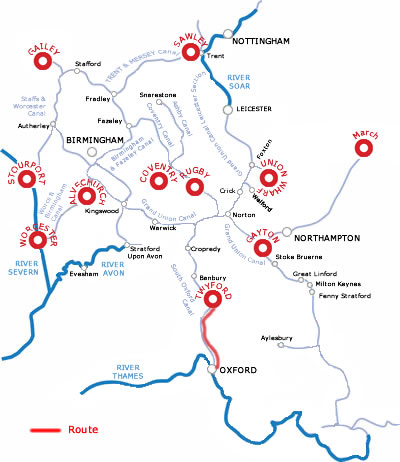 Cruise south from Twyford Wharf along the Oxford canal, passing the village of Kings Sutton to your left.

Where the River Cherwell crosses the navigation at Aynho Weir lock there is a strong stream lock. Observe the water level reading on the coloured level indicator board, on the top side of the lock, before deciding to continue.

This pleasant rural stretch of the canal is well punctuated by the characteristic wooden lift bridges that are usually left open.
It is well worth walking a mile east of Aynho Wharf by bridge 190 to visit the village of Aynho.
There is a pub canalside called the Great western. The village square has been untouched throughout the generations, and a 17th century mansion called Aynho Park is on the other side of the road.

Stop here for the night, it is 2 hours to here:

The canal continues its rural path, through water meadows and open pastureland.
The village of Upper Heyford is close to the canal, and there are a couple of pubs here, the main street of thatched stone cottages falls steeply to the canal.
Lower Heyford also has a village pub- the Bell Inn an attractive 17th century pub just off the towpath.


The canal is very wooded around here, the woods becoming very thick, the overhanging tress making a tunnel through which the canal passes.
The Oxford Arms is a ½ mile from the canal in Kirtlington, the lane to it is to the left of Pigeon bridge 213.
By Bridge 216 is the Rock of Gibraltar pub which has moorings.

Shipton-on-Cherwell is off to your right past Bridge 219, the church overlooks the canal. In 1874 the village was the scene of a railway disaster when 34 people were killed when the train fell into the frozen canal off Shipton bridge. In the 1860s the thighbones of a huge dinosaur were found in a nearby quarry & are on display in the University Museum in Oxford.

By bridge 221 in the lovely canalside village of Thrupp is the the Boat Inn, and by bridge 223 is the Jolly Boatman which has a canalside patio.

The canal skirts around Kidlington which is a suburb of Oxford until it reaches Dukes Cut where you can join the Thames (Licence required), or continue into Oxford, although be aware that there are limited Visitor moorings due to designated conservation areas and private moorings.
It is 5.5 hours to here


The city of Oxford was founded in the 10th century and has been a University city since the 13th century.

Also worth seeing is the Saxon Tower, which is the oldest building in Oxford- The tower is the easiest climb in Oxford, with good solid stairs including a handrail. There are several places to stop and rest if you need to. From the top of the tower there is a marvellous view of the city of Oxford and its famous "dreaming spires".; also the 15th century pulpit where John Wesley, founder of Methodism, preached the Michaelmas Day sermon on 29th September 1726; 13th Century stained glass in the East Window; 14th Century font from St Martin's Church ; Reredos of the 14th century Lady Chapel, restored in 1941; The door of Archbishop Cranmer's prison cell f rom Bocardo Prison is held in the tower. Archbishop Cranmer and his fellow bishops Latimer and Ridley were burned at stake in Broad Street in 1556; The church treasury, which includes a Elizabethan chalice dated 1562, and a Sheela-na-gig, dating back to late 11th or 12th century.
The Sheldonian Theatre was built in 1668 from a design created by Christopher Wren. It was named after Gilbert Sheldon, who was Chancellor of the University at the time the construction was funded. The theatre is used for music recitals.

Blackwell's Bookstore is an institution in Oxford. It's not just a regular bookstore - it has the largest single room devoted to book sales in all of Europe (the 10,000 sq. ft. Norrington Room). In order to create such a large space in a small city, Blackwell's excavated underneath Trinity College's gardens. Blackwell's sells both new and second-hand books, and has a cafe.
The Botanic Gardens are located on the peaceful banks of the Cherwell River, the gardens were started in 1621 as the Physic Gardens, for the study of medicinal plants. These are the oldest botanic gardens in Britain. In addition to the lovely outdoor gardens, there are greenhouses which grow many varieties of exotic plants and flowers. Just next to the gardens, crossing over Rose Lane, there are rose gardens that are exquisite in July.

Hertford Bridge is often called the Bridge of Sighs because of the similarity to the famous bridge in Venice. Actually, it looks more like the Rialto Bridge, and this Oxford structure was never intended to be a replica of any existing bridge. It was completed in 1914 to connect two sections of Hertford College.

Oxford castle was originally built in 1071 for William the Conqueror, to enable the Normans to control the area. A prison was built within the castle, which continued to be in use until 1996.
The prison was mainly used to house prisoners from Oxfordshire and Berkshire, and also the University's 'rebellious scholars' (as recorded in 1236). From 1613 until 1785, the prison and castle were owned by Christ Church, who leased the jail (gaol) to prison keepers. In 1785 it was redeveloped into a prison and house of correction, with a tower on which they held public executions. The last execution was in 1863.

Days 4 5 6 7
You can happily spend a couple of days in Oxford and then cruise back to Twyford Wharf over 2 days as it is only 13.5 hours back.