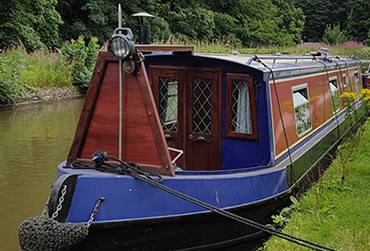 Directions to the Poynton

A fabulous place from which to explore Derbyshire & the Peak district.

This stretch of the canal has a green flag award and borders Lyme Park which is looked after by the National Trust. The village of Poynton is a mile away and has a great range of shops, restaurants and cafes. The local area is quiet and peaceful, nearby is a pub (The Boars Head) which is dog friendly and serves good food.

Macclesfield - The earliest settlement has been recorded in the Domesday book, it rose to be the most important town in East Cheshire , and now has cobbled streets and an picturesque market square, like the old market town, with some fine classical buildings mixed in with the modern. See the Silk Museum which was one of Macclesfield's major industries.

Bollington- Cotton once ruled in this area. Discover the bustling past at Clarence Mill and Adelphi Mill which sit alongside the Canal. From here it is only 1 mile to the bounday of the Peak District National park

The Macclesfield Canal passes through mostly green and rural surroundings, with Victorian mills and warehouses along the way adding a distinctive character. For boaters, it forms part of the Cheshire cruising ring. It is a tree-lined canal that follows the natural curves of the land, with only one lock flight on it. It is remembered by holidaymakers both for its elegance, particularly the roving or turnover bridges that allow a horse to transfer from a towpath on one side of the canal to the other without the need to unhitch; its spectacular views; and its architectural follies. For walkers, the towpath is a lovely place for a gentle stroll. If you are looking for a more ambitious hike, the Cheshire Ring Canal Walk follows the cruising ring � an impressive 97 miles in total. Around Higher Poynton the Canal becomes wider , and some consider this stretch to be the most pleasant moorings on the Canal, because the wide water supports large families of geese, ducks and swans.

By Road : Lord Vernons Wharf is at Higher Poynton which is south east of Manchester and north of Macclesfield just east of Poynton. To arrive by car use the postcode SK12 1TH for your sat nav. From the Boars Head pub drive over the bridge and turn left into the car park with the yellow height barrier. Follow this to the rear and up the hill and find somewhere to park, then call us and we will meet you , once your luggage is unloaded we will direct you to our secure gated nearby car park

By Rail : Train station at Poynton , train time from London is 2.5 hours changing at Stoke on Trent. It is 23 minutes from Manchester by train and 1.5 hours from Birmingham.It is a 10 minute taxi ride from the station to the Marina. We can also pick you up from Poynton or Middlewood train station by arrangement.

By Air : Manchester International Airport is 10 miles away, or 30 minutes by taxi.

Other Useful Information for Poynton

Groceries : Waitrose & Morrisons Supermarkets in Poynton You can arrange a supermarket delivery to the Marina if you wish

Bike Hire : https://www.ingear-uk.com/contact based in Poynton