This route passes some of the greatest British Castles & palaces :-
Windsor castle is the largest inhabited castle in the World, established by William the Conqueror during the 1070's
Hampton Court Park and Hampton Court Palace, Discover the magnificence of Henry VIII's favourite royal residence at Hampton Court Palace.

See Kew Gardens is London's largest UNESCO World Heritage site offering unique landscapes, vistas and iconic architecture from every stage of the Gardens' history. Its one of the World's great botanic gardens with thousands of rare outdoor and hothouse plants.

See where history was made, The Magna Carta Memorial - the sealing of the Magna carta was in Runnymede in 1215.

For those that like thrills & spills-
Thorpe Park - Thorpe Park is not for the faint‑hearted. It has some of the biggest roller coasters in Europe and the rides here are built to scare. It is perfect for adrenalin junkies.
LEGOLAND Windsor is a theme park dedicated to children aged 3-12 years old. An inspirational land where the kids are the hero. It's a family attraction like no other - where the fun never stops and imagination knows no bounds. With over 55 interactive rides and live shows. 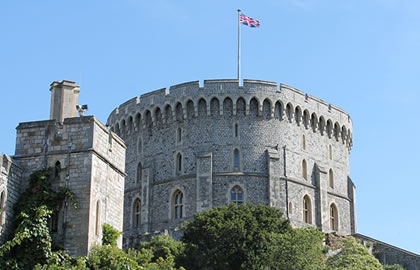 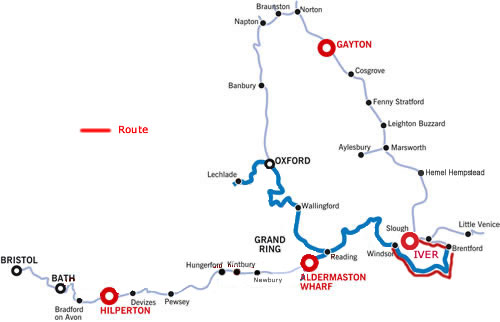 Along the Regents Canal moorings are provided at Kingsland, Battlebridge and Cumberland Basins all by prior arrangement, and at St.Pancras, east of Islington Tunnel, Little Venice, Bulls Bridge, Cowley Lock, Limehouse, and Brentford Gauging Lock.

Also see the Port of London authority guide to mooring on the Thames.

You should not consider this cruise unless you are experienced.

From your mooring cruise to the end of the Slough arm of the Grand Union Canal, at Cowley Peach Junction, and turn right towards Little Venice.
The Slough Arm was almost the last canal to be built in Britain, in 1882, and on the way to Cowley Peach Junction, you pass over 3 small aqueducts as you pass over the picturesque Cowley lake.
The main traffic on the Canal is the late 1800's was bricks made from the local clay.

It is 2 hours cruising to here from your mooring at Iver.

At bridge 203 is the canalside pub The Lamb with moorings.

The lock-free stretch stops at Norwood with a 12 lock drop down to the River Thames which includes the 6 lock Hanwell flight, it is an interesting and attractive cruise in parts.
Norwood and Hanwell locks are kept padlocked and can be operated with a CRT key.
The Fox pub is at the bottom of Hanwell Locks 50 yards from the canal, is virtually a village location.
Beware the weir after bridge 205a, it can be hazardous when there is freshwater in the river.

Boston Manor House is 1/2 mile north of Bridge 208, it is a fine Jacobean manor house built in 1623. The house has three staterooms including the State Drawing Room with its fine plaster ceiling and mantelpiece. One of the earliest examples of English Renaissance style, the exterior of the house is particularly fine.

There are moorings above Brentford Gauging locks with full facilities.

It is 4 hours cruising from Bulls Bridge to these Visitor moorings. There are various pubs in Brentford.

Syon House is the 16th-century seat of the Duke of Northumberland, and the entrance is 300 yards west of Brentford Gauging locks. It is noted for its fine Adams interior and period furniture and its paintings and it has 55 acres of Capability Brown gardens.

Brentford Gauging locks are subject to the tide, they are not operated by a lock keeper. Boats are requested to use the single lock on the toll office side to minimise the use of water, you will need a Watermate key to use the lock.
Boaters should download the CRT London tideway availability leaflet to find out information about the tide on the Thames.

The Thames here is tidal, Teddington Locks is 5 miles upstream and the upper limit of the tidal Thames.

It is essential that you keep all dogs inside the boat when operating these tidal locks.

Brentford High Street bridge in unnavigable at the top of the spring tides due to less than 4 feet headroom.

Kew Gardens is opposite the Thames Lock.
Kew is London's largest UNESCO World Heritage site offering unique landscapes, vistas and iconic architecture from every stage of the Gardens' history. It's one of the World's great botanic gardens with thousands of rare outdoor and hothouse plants. Kew Palace was built in 1631 in the Dutch style.


Richmond park to your left is the largest of the Royal parks created in 1637 by Charles I.
The Kew Observatory was built in 1729 in the Old Deer Park.

The pretty village of Isleworth is passed on the right, Van Gogh taught here and used the Thames as the subject for his first attempts at painting.


Soon you will approach Richmond Lock.
For around two hours each side of high tide, the sluice gates are raised into the footbridge structure above, allowing ships and boats to pass through the barrage. For the rest of the day, the sluice gates are closed and passing river traffic must use the lock alongside the barrage. This period of free navigation can be dramatically changed due to prevailing conditions. In drought conditions, the gates will be closed for longer periods, whilst in periods of high fluvial flow, they may remain open for much longer. For current information please contact the Lock Foreman on 0208 940 0634.

The sluice gates ensure that the water level between Richmond Lock and Teddington Lock is maintained at or above half-tide level.

Richmond Bridge is one of the most handsome on the River Thames, with five arches and parapet.

There are moorings by the Hammertons ferry at Ham House, overnight moorings vary from £20-£40 depending on boat size.
It is 1.5 to 2 hours to here from Brentford.

Ham House is a superb 400-year-old historic riverside mansion, situated beside the River Thames in Ham, south of Richmond in London. It is claimed by the National Trust to be "unique in Europe as the most complete survival of 17th-century fashion and power.
Opposite is Marble Hill House, Built in the 1720s, Marble Hill was an idyllic Thames-side retreat from court life for Henrietta Howard, mistress of King George II. In this perfectly proportioned villa, inspired by the 16th-century architect Palladio, she entertained many of the poets and wits of the age.
The ferry runs between Ham House and Marble Hill Park.

Beware the sandbanks by Eel Pie Island just off to your right.

Twickenham was one of the most desirable and elegant places to live in the 18th century. Nearby is Strawberry Hill House — often called simply Strawberry Hill— it is a Gothic Revival villa that was built in Twickenham, London by Horace Walpole from 1749 onward, not open to the public.

Teddington is just around the corner, and the end of the tidal Thames.
Traffic moving upstream must observe the light signals at the end of the lock island.

RD Blackmore author of Lorna Doone lived in Teddington from 1860. The Anglers pub is situated right next to Thames TV studios and has a mooring for customers. It is situated overlooking Teddington Lock.

Kingston upon Thames is off to your left, this Royal Borough was where 7 Saxon kings were crowned.

It is 3.75 hours to here from Brentford.

Above Kingston bridge to your right is Hampton Court Park and Hampton Court Palace, close to the river but protected from it by a long red brick wall,
Discover the magnificence of Henry VIII's favourite royal residence at Hampton Court Palace. Immerse yourself in the sights and sounds of the bustling Base Court and marvel at the breath-taking grandeur of Henry's State Rooms. Stroll through over 60 acres of enchanting gardens, lose yourself in the famous maze and appreciate the beauty of one of the greatest palaces on earth.

Sunbury Court Island is lined with immaculate chalets and bungalows.

Walton on Thames is on your left, Shepperton and its famous film studios are to the north near the vast reservoir. Shepperton marina has overnight mooring available.

At Penton Hook marina which is approached below the lock, it is possible to get overnight mooring and a short distance away is the mega theme park- Thorpe Park - Thorpe Park is not for the faint‑hearted. It has some of the biggest roller coasters in Europe and the rides here are built to scare. It is perfect for adrenalin junkies.

It is 8.5 hours to here from Brentford or 5 hours from Thames Ditton.

There are fine views across the park to Windsor between the Victoria and Albert bridges, below the last bridge the navigation passes Ham Island now a bird sanctuary, to Old Windsor Lock towards Runnymede.

Across Windsor bridge is Eton, the long and rambling High Street is a pleasant place to walk, Eton College was founded in 1440 by Henry VI and 18 former Prime Ministers have been educated here.


Explore Windsor:-
The main street of Windsor curves around the castle and is full of pubs, shops, restaurants and souvenir shops. Windsor Castle is the largest inhabited castle in the World, established by William the Conqueror during the 1070s the present castle was started by Henry II during 1165-1179. It has been meticulously restored after the disastrous fire in 1992 and includes:
Magnificent State Apartments furnished with treasures from the Royal Collection
• St George's Chapel (one of the most beautiful ecclesiastical buildings in England and the burial place of 10 monarchs)
• Queen Mary's Dolls House, a masterpiece in miniature
• The Drawings Gallery featuring an exhibition (see below for current display).

LEGOLAND Windsor is a theme park dedicated to children aged 3-12 years old. An inspirational land where the kids are the hero. It's a family attraction like no other - where the fun never stops and imagination knows no bounds. With over 55 interactive rides, live shows, building workshops, driving schools and attractions, all set in 150 acres of beautiful parkland, LEGOLAND Windsor is a unique family theme park.


There are moorings before or after Windsor railway Bridge, Windsor is to the south of the River, Eton to the North.
It is 4.5 hours from Penton Hook marina to here
Also, see moorings link below