RUGBY AND RETURN FROM TWYFORD WHARF

You can do this route from :
Twyford Wharf.

Cruise to the town where the sport of Rugby began. It was during a game of football in 1823 when a boy from Rugby school took the ball in his arms and ran with it, this started the modern game of Rugby football and changed the game forever.

A rural cruise, only travelling past villages until you get to Rugby.

Rugby is a large town with many shops and of course is the home of the game of Rugby. It is 30 minutes walk to the town centre.
The Web Ellis Rugby football museum tells the story of the game of Rugby over the last 160 years.
As part of your tour of the birthplace of the game be sure to take a walk along the Pathway of Fame, a unique tour which celebrates the history of the game and some of its most notable players
The centre of Rugby is a very pleasant place offering nice parkland and places to eat and drink in abundance.

There is a pedestrianised shopping centre and an open market with a town crier.

The town and borough has much more to offer than its unique connection with the famous game. It has links to great literary figures such as Rupert Brooke, Matthew Arnold and Lewis Carroll. 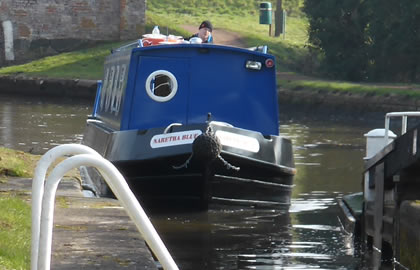 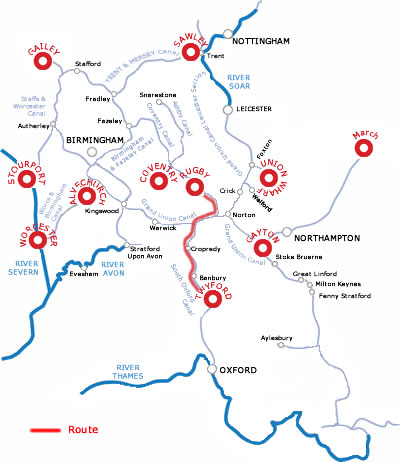 Choosing to go north you will pass through the town of Banbury, where the canal joins with the River Cherwell at Cropredy and up the Claydon flight of locks. Then you will ‘wind’ your way for 11 miles between two points that are only 5 miles apart. This was because the summit was never straightened and remains one of the most twisty canal sections in England. You will then pass through the Fenny Compton tunnel which is in fact a narrow cutting and pass an old wharf with a pub at the village of Fenny Compton.
From here you will wind around the summit of the Canal, Napton Hill, and descend the Napton ight of locks (9) where the Canal connects with the Grand Union Canal at Napton Junction. Here you share a 5 mile stretch with the Grand Union until you arrive at Braunston.
From here you can head on to Rugby, passing for short distances into Northamptonshire where the canal passes through rural scenery and doubles back on itself for several miles until you head northwards again. As you approach the village of Newbold-on-Avon you will be able to see the remains of the original tunnel dating back to the 1770’s. Now you will pass through the 250 metre long Newbold Tunnel after a set of 3 locks at Hillmorton, just east of Rugby. From here the Canal is relatively straight having been straightened in the 1820’s; you will see
much of the original, less direct route that still remains in places.


After having stowed your belongings and taking the training, your journey begins.

Heading north from Twyford Wharf you will encounter your first lock in a short while, so get your windlass ready!

The historic Tooley's Boatyard is worth a visit.

A nursery rhyme, 'Ride a Cock Horse', has made Banbury one of the best-known towns in England. It has been suggested that the 'Fine Lady' of the nursery rhyme may have been Lady Godiva or Elizabeth I. More likely it was a local girl who rode in a May Day procession. The original cross was pulled down at the end of the 16th century. The present cross was erected in 1859 to celebrate the wedding of the then Princess Royal to Prince Frederick of Prussia.

Banbury was originally a wool town.

The Mill Arts centre has plays theatre, dance & music. At Tooleys Boatyard you can have a guided tour and see boats being built and restored, it also has a working forge and a gift shop and chandlery.
Banbury Cakes, a special fruit and pastry cake, are still produced. At one time they were being sent as far afield as Australia, India and America.

Banbury has a massive indoor shopping centre called Castle Quay where almost 250000 people visit every week. All the majors stores are here, also restaurants and cafes.

Moor here for the night it is 1.5 hours to here

Leaving Banbury behind you will encounter a couple of locks spaced apart each side of the Motorway.
The surroundings return to those typical of the Oxford canal, and hills reappear to the west.

Continuing north along the Cherwell Valley the canal enters Cropedy, there are useful stores by bridge 153.
The quiet village of Cropedy which bursts into life during the annual Folk Festival, now Europe's largest, which is held on the 2nd weekend in August. It originally started in 1979 when Fairport Convention held their farewell concert here.

Near Claydon 5 locks take the canal to the summit level. Light woods border the canal, which is shallow and narrow in places so watch out that you do not ground, keep to the middle channel.
Near the 2nd lock are the remains of the old stable block for the canal horses, and the old canal company's blacksmiths is a private residence.

The village of Claydon is worth a look approached to the left of Bridge 145 , because of the Bygones museum access from Bridge 145.-The museum houses a unique collection of antiques and memorabilia gathered together by the owners over a period of sixty years. And you are encouraged to peruse in a free and relaxed atmosphere. There is a replica of a 1920's kitchen,electricians workshop, blacksmith, wheelwright and a boat-builder, 1903 Traction Engine, 1912 Steam Roller, Six tractors, a Trailer Fire Pump and many smaller machines and equipment and steam engines.

After Claydon Locks the canal twists and turns, hills and tree close in, and the railway re-appears for a time.

Moor here for the night it is 6 hoiurs cruising to here.

Priors Hardwick is east of bridge 124 along the footpath, The Butchers Arms is a smart village restaurant. Most of the village was pulled down by the Cistercian Monks in the 14th C.
The canal continues north through rolling open farmland, the windmill on top of Napton Hill soon comes into view at Marston Doles.
The summit ends and the canal starts to fall towards Napton Junction.

At Bridge 113 there is a water point and The Folly pub is canalside at bridge 113, and there is a useful shop next door. The shops and pubs are at the bottom of the village, but if you want to climb over 400 feet to the top of the hill you can see the 13th century church, and seven counties can be seen from this vantage point.

After the Napton Locks there are no locks for 13 miles until the Hillmorton Locks.

Moor here for the night it is 6 hours to here


Keep straight on at Napton Junction.

The village of Braunston is set up on a hill to the north of the canal, and is a very well known canal centre.

At Braunston Turn turn left up the Oxford canal, the canal runs through wide open country for quite a mile, only momentarily interrupted by the M45 just after Barby Bridge.

It is an ancient landcape and by bridge 87 medieval ridge and furrow field patterns are still in evidence.

Continuing up the Oxford canal Rugby comes in to sight, you descend the Hilmorton Locks and the canal swings in a wide arc around the town. There are shops near bridge 59 to the south, and a picnic area below bridge 53 with a huge Tesco supermarket nearby.

Rugby is a large town with many shops and of course is the home of the game of Rugby. It is 30 minutes walk to the town centre.

If you need to stock up on provisions, the selection of shops to supply food is brilliant in Rugby, offering deli’s, supermarkets, organic shops, local produce, bakers and butchers, and making it worth a look just for the shopping opportunities alone. The centre of Rugby is a very pleasant place offering nice parkland and places to eat and drink in abundance. There is a pedestrianised shopping centre and an open market with a town crier.

The Web Ellis Rugby football museum tells the story of the game of Rugby over the last 160 years.

As part of your tour of the birthplace of the game be sure to take a walk along the Pathway of Fame, a unique tour which celebrates the history of the game and some of its most notable players.
The town and borough has much more to offer than its unique connection with the famous game. It has links to great literary figures such as Rupert Brooke, Matthew Arnold and Lewis Carroll.

Moor here for the night, it is 6 hours to here.

Cruise back to Twyford Wharf, it is 20 hours back, or 3 days cruising