STOKE BRUERNE AND RETURN FROM RUGBY

Rural cruising through lovely countryside past the canal villages of Braunston & Stoke Bruerne with 2 small flights of locks and 2 tunnels, including the 3rd longest in the country! 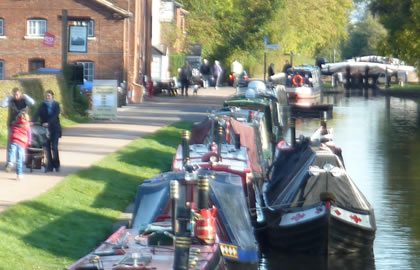 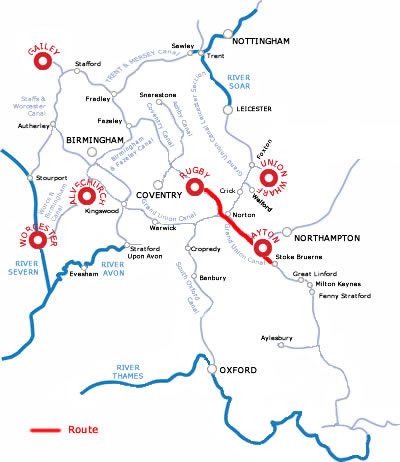 Rugby is a large town with many shops and of course is the home of the game of Rugby. It is 30 minutes walk to the town centre.
If you need to stock up on provisions, the selection of shops to supply food is brilliant in Rugby, offering deli’s, supermarkets, organic shops, local produce, bakers and butchers, and making it worth a look just for the shopping opportunities alone. The centre of Rugby is a very pleasant place offering nice parkland and places to eat and drink in abundance. There is a pedestrianised shopping centre and an open market with a town crier.

The Web Ellis Rugby football museum tells the story of the game of Rugby over the last 160 years
As part of your tour of the birthplace of the game be sure to take a walk along the Pathway of Fame, a unique tour which celebrates the history of the game and some of its most notable players
The town and borough has much more to offer than its unique connection with the famous game. It has links to great literary figures such as Rupert Brooke, Matthew Arnold and Lewis Carroll.

From the marina cruise south down the Oxford canal, leaving Rugby behind.
There are shops to the south of bridge 59 and a picnic area below bridge 58 with a huge Tesco supermarket nearby.

Your first locks are by Hillmorton and you can stop for the night by Bridge 71 where there is Bardsey's Lock stop Cafe bistro, which is open Wednes-Sat for meals or takeaways & has won awards for the best waterside restaurant.


You will need to get to Braunston Bottom Lock by 2.30pm because that is the last entry to the flight of 6 locks, it takes about 4 hours from Hillmorton.

After passing under the M45 motorway the canal leaves all civilisation behind, and does not pass any villages until it reaches Braunston Turn. The village of Braunston is set up on a hill to the north of the canal, and is a very well known canal centre. Turn left at the Junction with the Grand Union canal. Access is from Bridge 91. The Millhouse Hotel has moorings. There are a few shops, & pubs in the village.

Just after Braunston are the Braunston Lock Flight of 6 locks which precedes the very long Braunston Tunnel, which is 2042 yards long . The tunnel opened in 1796 and has a slight S bend. The Braunston Locks are open from 9-4pm daily with the last entry to the flight at 2.30pm. Continue along the Grand Union canal to Norton Junction and turn down towards London off to the right.
You can moor up here, it is 6 hours cruising from Hilmorton to here.

There is a pub just along the canal in the London direction of the Grand Union, called The New Inn at Buckby Top Lock by the canal.


The Buckby flight of Locks is open from 10-3pm with last entry at 1.30pm.
There are 7 locks along this stretch with only the railway & the old Roman road- Watling Street (A5) to keep you company. The canal is 1800 years younger than the road, but looks more outdated!
There is also a canal craft shop in one of the red bricked cottages by the locks.

From Bridge 18 you can access the Heart of the Shires Shopping Village- Set around a Victorian Courtyard converted from a selection of Victorian stables and farm buildings, this shipping village offers over 20 individual shops with character ranging from Kitchenwear to Menswear, plus Gift shops and a first class restaurant and tea room. Open 10-5 daily.
The next stretch of canal begins to meander as it avoids the hills, but passes directly through Weedon a good place to moor. This charming village has good facilities like a store, PO, garage & takeaways. There are also a few pubs like the Narrowboat by Bridge 26, the Heart of England & the Globe by Bridge 24, and the Plume of Feathers at the aqueduct by the Church. There are good moorings above the church.

The next village close by is Nether Hyford, there is also a Pub & stores here.

Bugbrooke is a short walk away by bridge 36 , the Wharf Inn is canalside by the Bridge, The Bakers Arms & The Five Bells Pubs are in the village. The village also has stores, PO and a garage.
The canal then reaches Gayton Junction where the Northampton Arm of the Grand Union goes away to the left, Gayton marina another of our marinas is situated along this arm.
Unless you particularly wanted to visit Northampton, it is not worth negotiating this arm, as you cannot navigate onto the River Nene in a narrowboat, and there are 17 locks down the 5 mile stretch to get to the town, where you will have to turn around and come back again

At the Gayton Junction keep going straight on towards London, the canal soon reaches the Village of Blisworth, there is a Pub- The Royal Oak in the village serving Real Ales.
Just outside of the village is the start of Blisworth Tunnel- at 3057 yards, Blisworth is the 3rd longest canal tunnel open to navigation in Britain. The Tunnel opened in 1805 and originally boats were legged through. The tunnel is wide enough for the passing of two 7 ft boats, but keep to the right.

At the end of the Tunnel is perhaps the best example of a canal village in the country- Stoke Bruerne. The houses flanking the canal are built mostly of Blisworth Stone. The warehouses and cottages along the Wharf have become a canal centre, with the Canal Museum standing out amongst them. It is housed in a fine old stone warehouse, and the unique collection of exhibits include a traditional narrowboat, steam and diesel engines, and extensive displays of canal memorabilia. Open Summer 10-5, in the winter Tues-Sun 10-4pm.

There are a couple of pubs by the Canalside- The Navigation and the Boat Inn, and a couple of restaurants in the village.


It is just over 13 hours back to the marina