TAMWORTH THROUGH THE ATHERSTONE LOCKS FROM COVENTRY

Coventry itself is worth a visit, being about 15-20 minutes walk from the canal basin.
A short walk from the canal basin is Coventry Transport museum reputedly the largest display of British made transport in the World- with over 200 cars, 90 motorbikes and 230 cycles on view. Coventry Cathedral was built in 1962 to replace the old cathedral which was destroyed in 1940.

The SnowDome at Tamworth is the ultimate snow, ice and leisure experience. The UK’s only dedicated children’s snowplay area, the ice skating rink, the UK’s only Ice Track, plus the real snow slopes offer a huge range of fun activities for adults and children of all ages and abilities. 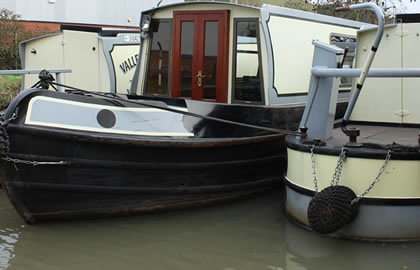 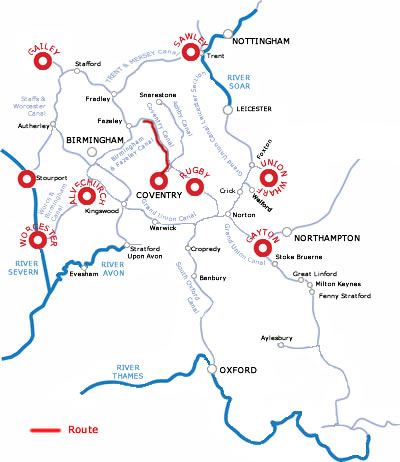 Coventry itself is worth a visit, being about 15-20 minutes walk from the canal basin.
A short walk from the canal basin is Coventry Transport museum reputedly the largest display of British made transport in the World- with over 200 cars, 90 motorbikes and 230 cycles on view. Coventry Cathedral was built in 1962 to replace the old cathedral which was destroyed in 1940.

From the restored Canal basin at Coventry with its canal architecture, cruise past Cash's hundred houses, an elegant row of weavers' houses, the looms were kept on the top floor- to Hawkesbury Junction , famous from the many photographs taken at this picturesque spot.

Its about 2 hours to here and you can moor up and take some liquid refreshment at the Greyhound, which is canalside at Hawkesbury Junction, or Sutton Stop.

The pub dates from the 1800's and is full of character, and is very photogenic beside the Junction which is where the Oxford canal is entered through a lock with only 6 inches difference in height.

Tomorrow you will be heading north along the Coventry Canal, don't turn right into the Oxford Canal.

Its 2 hours cruising to here.

Pass the Ashby Canal on your right and continue into Nuneaton .The canal passes near to the recently redeveloped pedestrianized shopping centre in Nuneaton,and offers large supermarket shopping, pubs and modern shops within easy walking distance of boot wharf at bridge 20.

The town of Atherstone borders the east bank of the canal, only running alongside the canal on the bottom half of the flight of locks beyond bridge 45, despite this, the setting of the entire flight feels detached from an urban setting other than some well kept homes and gardens in view of the canal. The locks are usually in a series of two or three with long pounds between most that offer some of the best moorings along the canal due to the quiet setting and proximity to local pubs and shops a short walk away. Atherstone flight will now be a quick process whether by design or not, despite being in good working order the locks operate reasonably sedately, take time to take in the architecture of some interesting footbridges such as footbridge 47 or the old buildings along the canal or the re- creation of a canal side yard.

Wooded hills to the west overlook a remote rural landscape , to the south of Bridge 41 is a useful PO and stores , to the north is the town centre of Atherstone, which is a pleasant town with a strong 18th century feeling. As the canal turns towards Polesworth are the remains of a iron swing bridge, a rarity on this canal.

Pooley hall is an area of reclaimed spoil heaps, now pleasant scrubland, and the wildlife is now taking over the area left by the old industrial past.

Moor for the night at Polesworth which offers shops and pubs but also remnants of an Abbey and a tithe barn which lends the village considerable character and interest.

It is 8.5 hours to here from Hawkesbury Junction

Day 3
Day 4
Once under the M42 Alvecote is soon reached & you can see the remains of a Benedictine priory through the trees. Across the canal is Pooley Field Nature reserve.

Continue onto Bridge 73 and moor near here, it is 1.5 hours from Polesworth.
It is best if you turn just before bridge and walk up to the bridge, otherwise you will have to negotiate another 2 locks and continue to the fazeley Junction before you can turn your boat which is an hour each way.

Access to the Snowdome is along the B5000 Glascote Road to your right from Bridge 73 , a 15 minutes walk. Turn left when you reach the junction and continue into Riverdrive, and the Snowdome.

Also worth a visit is Tamworth Castle just a bit further (5 mins) from the Snowdome with its Norman Motte and Elizabethan hall its a splendid melange of styles.