The Trent and Mersey begins by to the River Mersey near to Runcorn and flows to the River Trent in Derbyshire. Built by James Brindley the canal was promoted by pottery producers such as Josiah Wedgwood and consequently runs through the heart of the Potteries.

Harecastle Tunnel(s) – At nearly 3000 yard long there are actually two tunnels sitting side by side although only one is navigable today. Beware as this is thought to be haunted by the ghost of Kit Crewbuckett whose headless corpse was dumped in the canal.

Saltersford Tunnel – Although only 424 yards long the tunnel is far from straight and impossible to see from one end to the other. It is thought to be one of the most haunted tunnels on the canal system and its reputation was so bad that the boatmen feared to tackle it alone.

Anderton Boat Lift - Built in 1875 by Edwin Clarke the Anderton Boat Lift is known as the cathedral of the canal. Situated on the banks of the River Weaver in Cheshire the lift was used for over 100 years until it closed due to corrosion in 1983. After restoration the lift has now re opened and now hosts a visitor centre and boat trips.

River Dove Aqueduct - Built by James Brindley in 1770 to carry the Trent and Mersey over The River Dove the aqueduct has an impressive 12 arches span.

Heartbreak Hill – This set of 26 locks was built to reduce queues they are better than their reputation suggests as they are spread over 7 miles and there are plenty of places to stop.

Shardlow – The area has many inns and restaurants and the canal and river have been extensively developed. Visit the Heritage Centre for a fascinating insight into canal life during the 18th century.

Fradley Junction- This is one of the most picturesque waterside scenes in the Midlands and is the spot where the Trent & Mersey Canal meets the Coventry Canal. Take a well earned break at the cafe or pub and visit the nearby nature reserve for a guided walk and even have a go at pond-dipping. 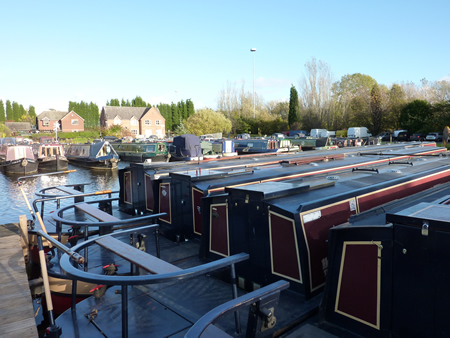