WARWICK AND RETURN FROM RUGBY

Most famous for its incomparable Castle, Warwick offers much, from its racecourse to the beautiful Priory Park. There is certainly enough here to fill a couple of days.

Warwick Castle is well worth a visit, and is possibly the finest medieval castle in the country. It is open all year, except Christmas. See the Kingmaker Exhibition, which uses wax sculpture to recreate the preparations for battle in 1471, as well as the dungeons, ghost tower, and sumptuous state rooms.

The Webb Ellis Rugby Football Museum, is a rugby football museum in the town centre of Rugby, near Rugby School. It takes its name from William Webb Ellis who is credited with inventing the game of Rugby football. 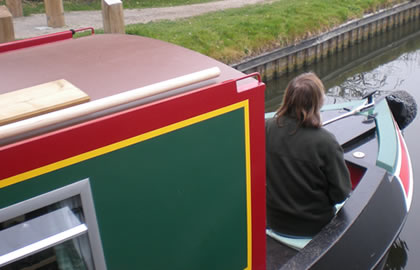 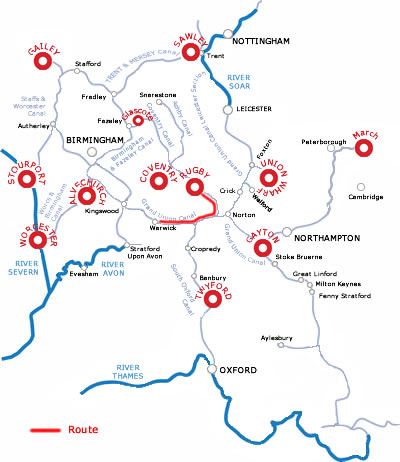 The canal runs past Rugby, through its northern side, bypassing the busy centre. The canal provides more striking examples of cast iron bridges, and an aqueduct, providing pretty scenery.

The selection of food shops is excellent in Rugby, offering deli’s, supermarkets, organic shops, local produce, bakers, and butchers, and making it worth a stop, just for the shopping opportunities alone, so bear in mind that after Hillmorton, there is only limited opportunity to shop for food for quite some time.

The centre of Rugby is a very pleasant place offering nice parkland and places to eat and drink in abundance.

The Webb Ellis Rugby Football Museum, is a rugby football museum in the town centre of Rugby, near Rugby School. It takes its name from William Webb Ellis who is credited with inventing the game of Rugby football. The museum is well worth a visit, and more details can be found on their website.

The canal cuts through green parkland, and a golf course, on the way out of Rugby, crossing over the River Avon, before arriving at Hillmorton Locks.

There are some great renovated old buildings in this area, and aside from some unsightly radio masts near the canal, Hillmorton Locks is an area with of peaceful beauty, that belies its proximity to rail lines, and Hillmorton directly to the South.

There are shops to the South of Bridge 59, and a picnic area below bridge 58, with a huge Tesco supermarket nearby.

By Bridge 71 you will find Bardsey's Lock Stop Cafe Bistro, which is open for meals or takeaways, and has won awards for the best waterside restaurant.

By Moors Bridge 72, you can moor for the night, and a little further along, you will find The Royal Oak Pub, canalside.

You have cruised 3 miles, and navigated 3 locks in 2 hours.

The canal winds southwards, and aside from crossing under the M45, descends into expansive areas of arable farming, with not a village to be seen in miles.

The village of Willoughby lies to the west of the canal. There are pubs and a few shops here, but it is a bit of a walk from the canal. Those seeking civilisation, should maybe wait until Braunston, slightly south from here, which is a bit more accessible from the canal. Braunston also marks the point at which the Grand Union joins the Oxford Canal for a few miles, before the southern arm of the Oxford Canal begins, and the Grand Union veers northwards at Napton on the Hill. This can be an exceedingly busy stretch of canal, due to the convergence of boat traffic, and the proximity to multiple marinas in the area.

At Braunston Turn, turn right onto the Grand Union Canal.

The village of Flecknoe is by bridge 102 off to your left, where The Old Olive Bush, a nice pub about a mile from the canal, is in the village.

The Oxford Canal and Grand Union, part ways just before the village of Napton on the Hill. The Grand Union veers off to the north, so turn right here, and soon you will encounter the Calcutt Locks - 3 locks quite close together.

The canal passes the villages of Stockton and Long Itchington, then descends through the Stockton Locks (8 locks), and the 2 locks at Itchington.

The local quarries produced blue lias, a local stone, and huge fossils have been found in the blue lias clay.

At Bridge 23 is The Blue Lias Inn, with The Two Boats Inn, canalside.

Just after this bridge, past the Kayes Arm Junction, is Shop Lock No. 12, where you can moor for the night.

You have cruised 15 miles and navigated 11 locks in just over 7¼ miles.

At Bascote, the only staircase locks you will encounter are reached. These are just 2 staircase, followed by 2 other locks. This is the last rural stretch before you reach Leamington Spa.

The canal descends through the quiet Fosse Locks, to the village of Radford Semele, which is an outlying village of Royal Leamington Spa.

You can moor up by Radford Bottom Lock, and walk to the village of Radford Semele, to your left.

The canal now heads westerly, through the suburbs of Leamington, getting to within half a mile or so of the town centre.

There are plentiful visitor moorings in Leamington, the Old High Street is just a minutes walk from the moorings, next to the Aga factory by Bridge 40, which has a few convenience stores, and several Indian restaurants.

The walk into the centre, goes past the old Pump Rooms that gave the town its name. Passing over the River Leam, you will reach the beautiful main shopping street, called the Parade. There are many restaurants in Leamington, and every taste and budget is catered for. There are even more pubs to enjoy, and if walking through pleasant parkland is appealing, then stop at Jefferson Gardens next to the Pump Rooms, for a good picnic spot where there are some impressive plants and flowers on show.

The gap, in between Leamington and Warwick, is almost indiscernible, but the difference in the two towns could not be mistaken. Where Leamington has wide straight roads, and white buildings in the spa style, Warwick’s twisting roads, old buildings of every type and shape, and more olde world feel, is a pleasant contrast.

You will need to turn around at Saltisford, then moor up for the night at Coventry Road Bridge No. 49.

Today you have covered 12 miles and navigated 16 locks in just over 7¼ hours.

Spend the day exploring Warwick and its Castle

Most famous for its incomparable Castle, Warwick offers much, from its racecourse to the beautiful Priory Park. There is certainly enough here to fill a couple of days.

The historic centre of Warwick lies a ten minute walk from the canal to the south, and is well worth getting off the boat for, and you can moor up by Bridge 49.

Warwick Castle is well worth a visit, and is possibly the finest medieval castle in the country. It is open all year, except Christmas. See the Kingmaker Exhibition, which uses wax sculpture to recreate the preparations for battle in 1471, as well as the dungeons, ghost tower, and sumptuous state rooms.

Warwick itself, is a lovely little town with some Tudor buildings.

You can get all your provisions here, if you need to stock up.

The Warwick County Museum in the Market Hall, houses a tapestry of Warwickshire dating from 1588.

Leaving your mooring, you will be heading back towards, Rugby Marina.