WYRE PIDDLE AND RETURN FROM STRATFORD UPON AVON

Birthplace of William Shakespeare. Visit the house where Shakespeare was born and grew up, and Anne Hathaway's Cottage, where the young Shakespeare courted his future wife.

Royal Shakespeare Theatre - this major British theatre produces around 20 productions a year, not only performing Shakespeare plays, but a variety of other plays.

Holy Trinity Church - Since 1210 people have worshipped in here, at one of England's finest parish churches. It also is the resting place of William Shakespeare and Anne Hathaway.

The old riverside town of Evesham has a few elegant Georgian buildings and half-timbered houses. In the lovely Abbey Park, you can sit back and soak up the tranquil atmosphere, or listen to the bandstand music on Sunday afternoons, in the summer.

Wyre Piddle is famous for having its own Microbrewery, started in 1992 by an ex pub landlord. 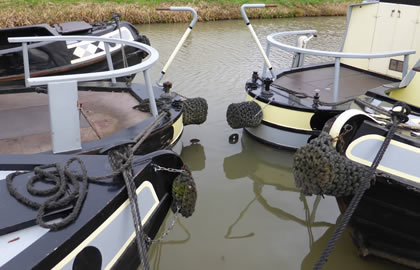 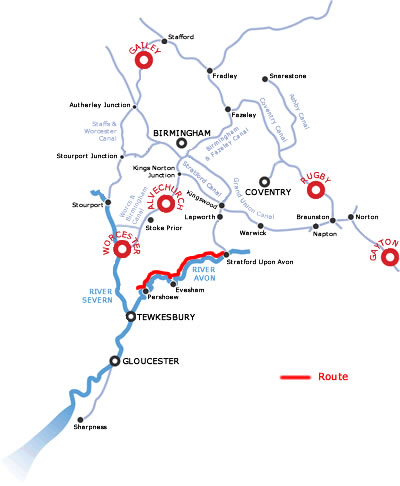 DAY 1
You might like to spend your first or last night exploring Stratford upon Avon. This beautiful medieval market town is the C16th birthplace of William Shakespeare.

You can stay at the base, which is within walking distance of the town, and from here you can visit the many pubs, shops and restaurants that the town has to offer, as well as, of course, as the Royal Shakespeare Theatre. Trinity Church is where Shakespeare is buried, and the house where he was born as well as Anne Hathaway's cottage are all within a short distance.

If you prefer, you can get on your way, and get a few locks navigated and still moor up in Stratford upon Avon in the Bancroft Basin.

The first lock, One Elm Lock No. 52, is within sight of the Valley Cruises base at Stratford, which takes you under the road.

Three more locks are to be navigated before you reach Bancroft Basin, then the last lock before you reach the River Avon is in front of you. There are notices in the basin telling you where the river licence can be purchased.

You can either moor for the night here in Bancroft Basin, which is about an hour from the Valley Cruises base, or if you wish to get further on, the next mooring would be just before Weir Brake Lock (1½ hrs from base), or Luddington Lock (2½ hrs from base), on the River Avon. There are no village pubs nearby, so you could travel to The Four Alls pub in Welford on Avon, near Binton Bridges, which is about three hours from the Valley Cruises base (fee payable unless you moor by pub). The multi-arched Binton Bridge is very attractive, with the pub is just before it and the moorings just after. There are also free moorings at Welford Lock.

DAY 2
From Binton Bridges it is just over 5 hours to Evesham, or from Bancroft Basin add 2 hours, or from the Valley Cruises base, add 3 hours.

Welford Lock is soon reached, and access to the village of Welford on Avon, followed by another couple of locks before you reach Bidford on Avon (2 hrs from Binton Bridges). There is free mooring at The Frog canalside pub, and also The Bridge Riverside Eatery.

The village makes a good stop, and has a good range of shops and takeaways. The bridge here was built in 1482 by the monks, and there is a excellent delicatessen and bakery not too far from the bridge.

The village of Offenham is reached before you get to Evesham.

At Offenham Lock there are free moorings, and you may wish to moor here and walk along the canal to the Valley in Evesham, which is set in 125 acres. There are many shops, cafes and restaurants, and kids will love the mile long narrow gauge railway (open every weekend or during school holidays).

Once Evesham is reached, there are free moorings upstream of Abbey Bridge on the right bank, and also by Workman Gardens.

The old riverside town of Evesham has a few elegant Georgian buildings and half-timbered houses. In the lovely Abbey Park, you can sit back and soak up the tranquil atmosphere, or listen to the bandstand music on Sunday afternoons, in the summer. The Bell Tower is all that remains of a large Abbey which was demolished after Henry V111 closed the monasteries in 1540. Also worth a visit is the Heritage Centre at the Almonry, which is housed in a C14th building, and which houses a wealth of information and artefacts.

In July each year, Evesham hosts a spectacular weekend, The River Festival, where boats moor alongside Workman Gardens for an illuminated boat festival with fireworks.

DAY 3
From Evesham to Wyre Piddle is about 3 hours cruising on the River Avon.

En route you will cruise through Chadbury, Fladbury and Cropthorne, before arriving at the tiny village of Wyre Piddle. The villages are picturesque, with half-timbered and thatched cottages.

Wyre Piddle is famous for having its own Microbrewery, started in 1992 by an ex pub landlord. For more information, visit http://www.pub-explorer.com/realale/wyrepiddlebrewery.htm, where you will find the contact details, should you wish to visit.

You will need to your boat turn around today, in preparation for the return journey to Stratford upon Avon.