BATH AND THE VALE OF PEWSEY FROM HILPERTON

Cruise to the historic City of Bath , one of Britain's most appealing cities with Roman and Georgian architecture, including the famous Roman Baths, see the Royal Crescent and Jane Austen centre.

The Vale of Pewsey – tranquil, spiritual and ancient. The Vale is a beautiful area in the eastern half of the county with the village of Pewsey at its centre. It is a walking and exploring landscape, studded with pretty and unspoilt villages and forms the western extent of the North Wessex.

Devizes is a historic market town with a colourful Medieval past, wealth of history and architectural heritage with more than 500 listed buildings and a large Market Place in the heart of the town. Take a tour of Wadworth Brewery, sample their famous 6X and meet the Shire horses that still deliver to pubs in the town.

See the 29 locks of the Caen Hill flight on the Kennet and Avon canal, a triumph of Georgian engineering. 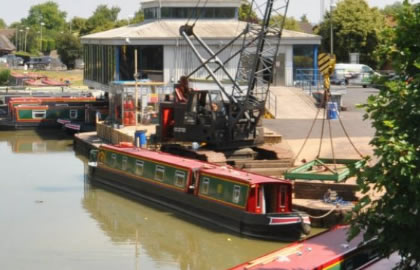 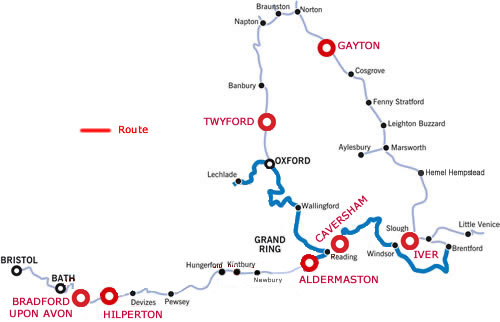 The town's lengthy history is recorded in the museum, which tells the fascinating story of Trowbridge's people and past. The museum has also won the Association of Industrial Archaeologists award for 'best site visited' in 2008 & it is located in the last woollen mill in Trowbridge, which closed its doors as a mill in 1982. The fascinating collections in the Trowbridge Museum are accessed via The Shires Shopping Centre - built on the site of part of the woollen mill and home to a diverse selection of more than 50 shops all on one level and undercover.

If you have all your provisions you can begin your journey. If not if you walk back along the towpath to Hilperton Road bridge 166, there is a convenient stores here.

The River Avon rushes along beside the canal, Avoncliff is a nice place to stop with its tearoom and pub overlooking the river.
One of the most impressive structures on Britain's waterways, the Avoncliff Aqueduct at over 100 metres long and 18 metres wide, carries the Kennet & Avon Canal over the River Avon.

Further along, if you moor at Limpley Stoke Bridge, walk down the the Railway bridge & turn left you will find a lovely 400 year old Pub called the Hop Pole, which was originally a monks wine lodge.

Bathampton & Bathwick are on the outskirts of Bath, turnaround just after the Cleveland House Tunnel, or if your boat is under 50 foot long, you can turn a bit further along after Sydney Wharf Bridge 188.

Mooring here puts you in line with the rooftops of the city and an enjoyable walk away from the city centre.
Cruising into Bath is like gliding into Regency Britain. It is 3.5 hours from Bradford on Avon to Bath

Turn the boat and cruise back the way you came, past Hilperton marina again on your way to the Vale of Pewsey.

As well as the many swing bridges around Seend there are 5 locks to navigate, luckily there are plentiful moorings at the ever-popular Seend Cleeve and close by pubs and quiet countryside to please the eye and fill the stomach. There is the Brewery Inn 200 yds south of Lock 19 and the Barge Inn by Lock 19.

The Three magpies pub in Seend Cleeve has good quality food, nice beer garden and good ales- it is 200 yds south of Sells green bridge and a good place to moor for the night as it is 8.5 hours cruising to here.

Today you conquer the fantastic Caen Hill flight of 29 locks in just 2.25 miles.

It is 6 hours to here


From Devizes Wharf you set off again, with not such an energetic day as yesterday, there are no locks, you cruise to the Vale of Pewsey and back to Devizes again.

As you leave Devizes you cruise through rural surroundings, the village of Bishops Cannings is accessed from Bridge 133 with a pub in the village, and All Cannings from bridge 128 where there is a small shop & pub.

More small villages are passed but there is hardly any habitation canalside as you pass through the Vale of Pewsey. A miniature suspension bridge carries a private footpath from Stowell Park across the canal, as is the only surviving example of its kind. Stowell park House was built in the early 19 century, and can be clearly seen from the canal.

At Wilcot bridge 117 you can get to the small village of Wilcot where the Golden Swan Pub stands beyond the green at the far end of the village. A one handed ghost is said to haunt this pub.

Pewsey Wharf is a mile from the town centre but has a pub canalside. There are shops in the town which can be accessed to the north of Bridge 114. To the north, hills descend to the waters edge and to the south the land opens out, giving fine views over the Vale of Pewsey.

It is nearly 4 hours to Pewsey from Devizes, turn your boat just beyond Milkhouse Water Bridge 112 and strat back to Devizes, the whole trip will take 8 hours

Day 6 7 8
It is 10.5 hours back to Hilperton marina so on Day 6 tackle the Caen Locks, you should be an expert by now, and see how far you can get, there is no rush, plenty of time to get back to the marina