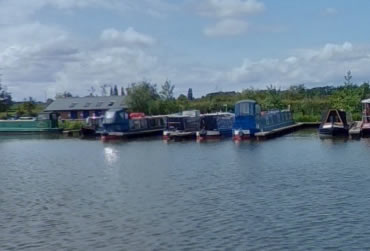 Directions to the Kings Orchard Marina

Located in Staffordshire on the Coventry Canal, nestled within a beautiful rural location.

Lichfield town centre is about 3 1/2 miles away from the marina giving you a great choice of bars and restaurants and other useful local amenities for groceries, activities and so on.

The Coventry Canal forms part of the Leicester Ring including The Trent and Mersey Canal, The Grand Union, Leicester Section, Canal and the North Oxford Canal. The Coventry Canal opened in 1769 and was constructed to join the vast expanding city of Coventry with The Trent and Mersey Canal. The Canal was once busy with narrowboats carrying coal but commercial traffic ceased soon after World War II. The Canal is surprisingly rural and has recently seen an increase in the amount of narrowboat craft enjoying the route

Tamworth - A short walk from the towpath leads you to the pleasant town of Tamworth where you will discover 'The Snowdome' a fun packed family attraction where you can learn to ski or toboggan on real snow on the impressive 170 metre slope. Tamworth Castle - Located in the town centre next to the River Tame the castle has existed since Anglo Saxon times. Take a tour of the castle and journey through time starting at the Medieval Dungeons, not for the feint hearted though as Tamworth Castle is said to be home to many ghosts and spirits.

Birmingham is famous for having more miles of canals than Venice and in the middle of the 18th century there were 174 miles of canals in the area and there is still over 100 miles that remain navigable. Birmingham's first canal was opened in 1769 and used to carry coal from Wednesbury's coalfield to the industries in Birmingham. Walk the tow paths and see the city in a whole new light, there are over 15 miles of canal within the city centre. Gas Street Basin was the hub of Birmingham's canal system and today it is well worth a visit for its range of waterside pubs and to see the pretty canal boats moored there. Stroll into the city to discover the wealth of shops including the controversial Selfridge's building an iconic curved structure with a cladding of 15,000 spun aluminium discs. The Bull ring has been a site to a market for more than 800 years and is still hosting indoors and outdoor markets today. Visit the Jewellery Quarter where you can find the best deals and prices

By Road : The A38 offers the easiest access. Leave the A38 onto the A5192, Cappers Lane turning east (away from Lichfield). Take the first left and follow country lane. Follow country lane over canal bridge and, with The Plough on your right, bear immediately left looking out for brown tourist sign directing you to marina entrance on your left. For Sat Nav users, we advise you use the postcode for the Plough pub that is a 3 minute drive from the marina: WS13 8PY.

By Air : The closest airport to the marina is Birmingham International Airport which is a ~30 minute drive away.From London Airports: Make your way via the London Underground, bus or taxi to London Euston train station. From there take a train to Lichfield Trent Valley which is very close to the marina.