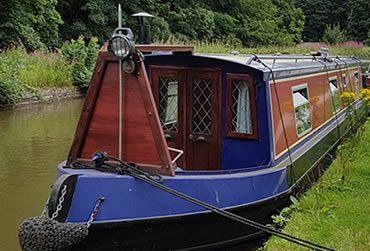 Directions to the Middlewich

Located on the Cheshire Ring and Four Counties Ring, close to Llangollen canal

Llangollen Canal is only 5 hours cruising from Middlewich , it crosses the border between England and Wales and is a combination of picturesque countryside and breath-taking engineering.

The historic City of Chester is only 12 hours cruising from Middlewich - Chester has the most complete city walls, the oldest racecourse and the largest Roman Amphitheatre in Britain, plus a 1000 year old Cathedral with Europe's finest example of medieval carvings - and the 700 year old Rows galleries where shopping is a double delight. Chester Zoo is one of the largest in the UK

Four Counties Ring can be done in a week from Middlewich- The Four Counties are Cheshire, Staffordshire, Shropshire and West Midlands. This route takes you through beautiful countryside, with Historic houses like Shugborough, navigate the 2670 metre haunted tunnel at Harecastle, and see our industrial heritage in the Potteries museums in Stoke on Trent. From the Shropshire Union Canal through the rolling Cheshire Plains to the Trent & Mersey Canal, the Staffordshire & Worcester Canal and back via the Shropshire Union the Four Counties Ring is one of the more rural Cruising Rings and is best savoured slowly and although the route is mainly rural it is interspersed with picturesque towns like Nantwich, Market Drayton & Penkridge with their half-timbered buildings.

Cheshire Ring - A fascinating trip that takes you through the heart of Manchester and the Peak District with its distinctive stone architecture. The Cheshire Ring is a canal cruising circuit or canal ring, which includes sections of six canals in and around Cheshire and Greater Manchester in North West England: the Ashton Canal, Peak Forest Canal, Macclesfield Canal, Trent and Mersey Canal, Bridgewater Canal and Rochdale Canal. It passes through contrasting landscapes between Manchester city centre and rural Cheshire with views of the Peak District and the Cheshire Plain.

Stoke on Trent and the Potteries - perhaps best known for being the home of the pottery industry. If pottery is your passion then you will not be disappointed with the wide range of wares - Wedgwood, Royal Doulton, Portmeirion and Moorcroft to a name a few. The Potteries Shopping Centre is in the heart of the City and contains all of your favourite high street stores

By Road : From the M6 we recommend taking junction 18 and turning right (if travelling southbound on M6) or left (if travelling northbound) on the roundabout and exiting along Holmes Chapel Road. After 3 miles and crossing straight over an additional roundabout you turn left onto Leadsmithy Street (A533) a little way down the road turning (200 ft or so) onto Canal Terrace taking a left just in front of a shop called Winsford Plant Hire. Our base is at the end of the short lane on the left hand side. Welcome!

By Rail : Nearest train Station is 3.6 miles at Sandbach. A transfer can be arranged at an additional cost.

By Air : From Manchester Airport you can conveniently reach us by either hire car or taxi we are just off the M6 motorwa. A transfer can be arranged at an additional cost.

Other Useful Information for Middlewich