BATH AND THE BREATHTAKING CAEN LOCKS

This route takes you to the bottom of the spectacular Caen Hill flight of Locks (does not include this flight, but you can walk up it to the lovely Cafe at the top!!). 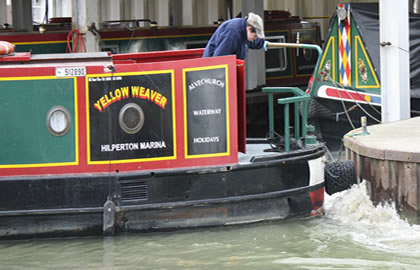 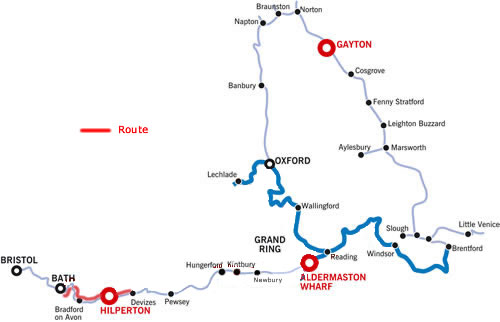 If you have all your provisions you can begin your journey. If not if you walk back along the towpath
to Hilperton Road bridge 166, there is a convenient stores here.

Day 2
The River Avon rushes along beside the canal, Avoncliff is a nice place to stop with its tearoom and pub overlooking the river. Further along, if you moor at Limpley Stoke Bridge, walk down the the Railway bridge & turn left you will find a lovely 400 year old Pub called the Hop Pole, which was originally a monks wine lodge.

Bathampton & Bathwick are on the outskirts of Bath, turnaround just after the Cleveland House Tunnel, or if you boat is under 50 foot long, you can turn a bit further along after Sydney Wharf Bridge 188.

Mooring here puts you in line with the rooftops of the city and an enjoyable walk away from the city centre.
Cruising into Bath is like gliding into Regency Britain.
(Cruising time 3.5 hours)


Day 3
Cruise back past Hilperton Marina .
The canal sweeps through undulating woodland and arable farmland past the rural village of Semington through a series of swing bridges which are something of a hallmark of this section of canal.

As well as the many swing bridges around Seend there are 5 locks to navigate, luckily there are plentiful moorings at the ever-popular Seend Cleeve and close by pubs and quiet countryside to please the eye and fill the stomach. There is the Brewery Inn 200 yds south of Lock 19 and the Barge Inn by Lock 19. The Three magpies pub in Seend Cleeve has good quality food, nice beer garden and good ales- it is 200 yds south of Sells green bridge.

The hills to the south climb steeply up to the village of Seend and to the north flat pasture land stretches away.
Moor by Sells Green bridge 149 for the night as the Three Magpies pub is quite handy, just walk up the lane to your left by the bridge.

It is 8.5 hours cruising to here

Day 4
Cruise the mile or so to Lower Foxhangers Bridge and then you reach the beginning of the Foxhangers Locks, so rather than go through them all to get to the bottom of the Caen Locks, just walk the 1/2 mile up the towpath.
You can then get photos of the boats making their way up this fantastic flight of locks, which is a marvellous feat of engineering.
Its about 5.5 hours back to the marina, so take yor time. You could even walk up the Caen Locks because at the top is a lovely cafe, so you can treat yourelf to a cream tea!!