BIRMINGHAM FROM STOURPORT ON SEVERN

Experience Britain's second city, a thriving cosmopolitan centre, with some of the finest shopping, culture and visitor attractions in Europe, with it's waterside pubs and colourful boating community.

Travel through Birmingham's past industry of glass making, and old engine houses which uses to pump the water from flooded colliery mines.

By the 20th century Birmingham had become the metropolitan hub of the United Kingdom's manufacturing and automotive industries, having earned itself a reputation first as a city of canals, then of cars, and most recently as a major European convention and shopping destination.

Among other attractions are the National Sea Life Centre, Fine Art Galleries, and the Jewellery Quarter, which dates back over 250 years and is still home to over 400 jewellery businesses. 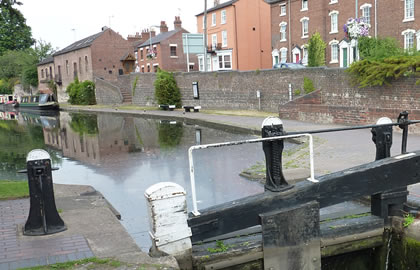 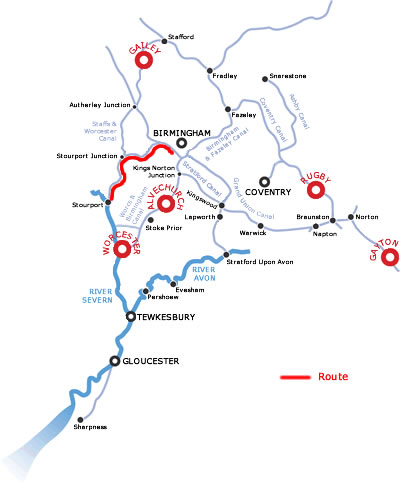 Turn right at the Stourbridge Canal and you immediately encounter 4 locks .

The Stourbridge and Dudley Canals link Birmingham to the River Severn and you pass through a mixture of fine countryside old industrial surroundings and new developments.

You pass pretty wooded countryside which surrounds the canal until 2 miles later you pass the Stourbridge Town arm to your right which you can ignore, keep straight on through the flight of 16 Stourbridge Locks which raise the canal 145 feet.
Beyond lock 13 the canal passes Redhouse Glassworks which houses Stuart Crystal . Moorings are provided for those who are visiting the Museum in a restored bottle kiln.

You can moor by lock 5 as there is a fine old canal pub here called the Samson & Lion where boatmans horses were once stabled where you can get a burger and pint!
It is 8.5 hours to here

Ignore the Fens branch and take the right turn through Brierley Hill and Dudley. There is a handy Fish & chip shop and takeaway next to Farmers Bridge. A more open landscape flanks the canal now and the start of the Delph locks is in view and here the Stourbridge canal ends and the Dudley canal starts.The flight has been designated a conservation area .

Leaving the flight you pass the vast Merryhill shopping centre in Dudley with its 250 shops, and modern waterfront area with many restaurants and bars, so if you would like to stop for a bit of retail therapy or a meal in one of the lovely Restaurants now is your chance.

The Blowers Green Lock is the deepest on the Birmingham Canal navigation, and the pumphouse here has been restored. There are good views towards Netherton hill, at the top of the hill is St Andrews Church where cholera victims were buried in mass graves.

After the lock a sharp right turn is required as straight on the Dudley Tunnel which is impassible for boats with engines.

Netherton was once the centre for chains and anchors but the old wharves no longer house these activiites.

Beyond Fox & Goose Bridge the houses retreat and a fine green open space by a lake lies beside the Windmill End Junction , with cast iron bridges and the remains of an Engine house with its tall chimney still standing, built to pump water from the local mines to keep them from flooding.

The Bumblehole Branch is off to the west, but you will continue straight on to the grand entrance of the Netherton tunnel , the canal is high on an embankment in a nature reserve.
Netherton Tunnel has a long history of haunting. At least 2 ghosts have been reported here. The first is an old time policeman who was saidto have been mudered in the tunnel and the 2nd is a lady in a dirty white dress known as the Grey lady. People have also heard footsteps behind them which stop when they turn around, and also wet footsteps disappearing into the tunnel but which suddenly disappear!

Netherton tunnel is 3027 yards long and emerges to go under the Tididale aqueduct which carries the Wolverhampton level, and at Dudley Port Junction you turn right along the Birmingham Level main line.

At Bromford Junction do not turn off but keep straight on under the Stewart Aqueduct which takes the Wolverhampton level overhead, through Galton Tunnel (122 yards), ignorng the Soho Loop and Icknield Port Loop and you can moor by Sheepcote Street moorings or further on at Gas Street Basin.
You are in the heart of Birmingham's canal network, which has been redeveloped into a unique experience where traditional narrow boats moor up next to cosmopolitan cafes and bars.

The surrounding area is a vibrant arts & entertainment area and there are many shopping options within a short walk.

If you choose to moor up next to the Sea Life Centre, you will be spoilt for choice with the variety of cuisine on offer, with over 500 restaurants to choose from offering Caribbean to Nepalese, Thai to Italian, and many more. You will also find clubs and bars, cinema's, theatre's and comedy clubs.
Among other attractions are the National Sea Life Centre, Fine Art Galleries, and the Jewellery Quarter, which dates back over 250 years and is still home to over 400 jewellery businesses.

It is a designated conservation area, with only 200 listed buildings, and has been described by English Heritage as 'a unique historic environment in England'.

For those who like a little retail therapy, a visit to the BullRing is a must. It covers an area the size of 26 football pitches, and has an enormous range of shops.

Also nearby, is the National Indoor Arena, one of the busiest large scale indoor sporting and entertainment venues in Europe.

Days 4 5 6 7
Its 20 hours back to Stourport, so spend a day exploring Birmingham , that still gives you 3 days left with about 7 hours each day cruising