CHESTER AND RETURN FROM BLACKWATER


Cruise to Chester through Ellesmere's mini Lake District, the Meres or Lakes were carved out during the Ice Age.

There is a wealth of things to do in the Roman City of Chester which can be seen on foot, because of the amazing survival of the old city wall. You can walk right round Chester on this superb footpath. 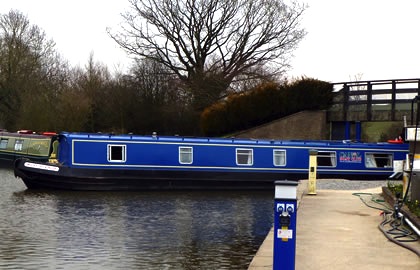 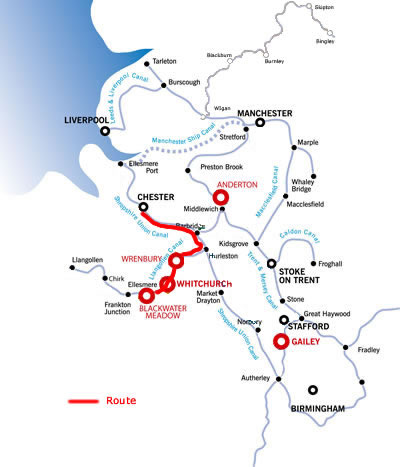 
If you want to spend a day or so at Ellesmere, there are some lovely castles & stately homes within a short drive:
If you base yourself at Ellesmere on the first or last few days, Powis castle is only 25 miles away by car (30 minutes), this is the home to the Earls of Powis, and was built by the Welsh Princes in medieval times.

Also only about 30 minutes away from Ellesmere is another National Trust property- an 18th century Regency mansion.

Turn left out of the marina and soon you will see why this area is known as the mini Lake District, as you pass some of Ellesmere's Meres (lakes). The largest mere is off to the north just before Ellesmere Tunnel, but after the tunnel you pass the small Blake Mere, then off to your right is Cole Mere. The Meres were carved out during the Ice Age.
The canal now passes through a very remote and underpopulated area, passing no villages for miles.

Just past the lift bridge is Whixall Moss, a raised bog with rare insect and plant life, but there might be mosquitoes as well! The bog was also formed during the Ice Age. There are walks & cycle routes over Whixall Moss, see leaflets near bridges 44 & 45.

Stop near Platt Lane bridge 43.
It is 3 hours 20 minutes cruising to here & a good place to stop for the night.

Another lift bridge is encountered at Bridge 42, and the Canal weaves its way through the quiet countryside until it reaches the town of Whitchurch, which is preceded by two lift bridges at 34 and 33. Another lift bridge marks the entrance to the Whitchurch Arm of the Canal, where you can moor to take the ½ mile walk to visit the town centre.

Whitchurch is an old town dating from the Roman times and has some beautiful old houses of all periods in the town centre. There are lots of splendid pubs in the town, and shops & a swimming pool.

Worth a visit is St Alkmunds Church, built in 1713 on a hill, it has a stunning interior and is on a grand scale.
Leaving Whitchurch you travel up to the Grindley Brook Locks, these famous staircase locks have made this a canal monument.
The 3 staircase locks are closely followed by 3 more locks, a friendly lock-keeper is on hand to help from April-Oct 8.30 am to 18.30.
By the Locks is the Lockside Stores, selling local produce and with tea & coffee & snacks served in the adjacent cafe, which has internet access.

It is just over 5 hours cruising from Whitchurch to here.

From Wrenbury marina you will soon encounter a Lift bridge, if it is down you need to get your windlass out and let someone off the boat to open it up.
There are 3 locks at Baddiley but apart from that the countryside is flat, rich farmland.

You can moor up for refreshment aftera couple of hours cruising by Halls lane bridge 12, and take the track to Ravensmoor where you will find the Farmers Arms serving real ale & meals.
There are 2 locks at Swanley but no more until you reach the end of the Llangollen canal at Hurleston, where there are 4 in quick succession. Hurleston reservoir is off to the left.
Turn left at Hurleston junction onto the Shropshire Union Canal, you will follow the reservoir for a short while. At Barbridge you reach the junction of the Middlewich branch of the Shropshire Union, but you carry straight on and head towards Chester, you are joined by a busy road until it turns away at Calveley. There is a bar & grill at Barbridge.

Bunbury water mill is up the hill from Bunbury Wharf, & is open Easter-Sep & gives guided tours around its fully restored watermill.
You can moor up for the night at Beeston Broom Bridge 107, there is the Beeston castle Hotel here.

The Canal continues through the flat but green Cheshire landscape, the Cheshire cycleway following the canal here, and continues all the way into Chester.
Off to the left by bridge 113 there is a pub- the Poachers Pocket.

Continue through the quiet countryside there are no stores until you get to Waverton where there is a shop.
Just past Waverton off to your left was the site of the Battle of Rowton Moor in 1645, where one of the last major battles of the Civil War took place, with the Parliamentarians beating the Royalists.

You are now on the outskirts of Chester and some of you may wish to moor up here and turn around at Christleton, near bridge 121, near the Cheshire Cat pub, thus saving 6 hours of cruising time to negotiate the 10 locks down into Chester and back. There is a very convenient Park & Ride here which can take you into the city of Chester in a few minutes.

CHESTER-
There is a wealth of things to do in this Roman City which can be seen on foot, because of the amazing survival of the old city wall. You can walk right round Chester on this superb footpath.
There has been a church on the site of The Cathedral for over 1,000 years originally a Saxon Minster then rebuilt as a Benedictine Abbey this magnificent building is a national treasure in the heart of the city. Visitors can view the Norman arches and Gothic columns and the medieval shrine of St. Werburgh. The Cloisters and Church form one of the most complete medieval monastic complexes in the country.

Lying outside the town is Chester Zoo is home to 7000 animals including some of the most endangered species on the planet.
Take a journey through the Butterfly house a 400sq meters tropical house and is home to more than