ELLESMERE PORT AND RETURN FROM ANDERTON

You can do this route from :
Anderton Marina. 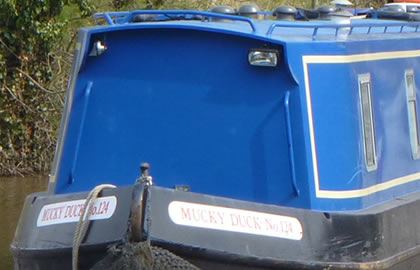 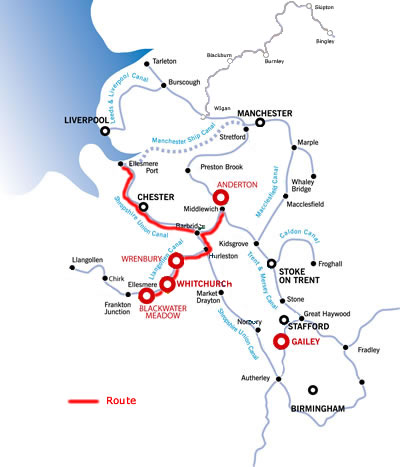 From Anderton marina you head south along the Trent & Mersey canal.

Away on your left you will see Marbury Country park which has woodlands carpeted with bluebells in the springtime, or relax under the shade of the lime avenues. Wander along the mere with splendid views over the water to the church at Great Budworth, or explore the arboretum and community orchard. Children will enjoy the play area, close to the picnic area.
There are attractive short stay moorings here if you have had a long trip and want to moor up somewhere local for the night.

As the canal heads towards Middlewich you move out into fine open country on a beautiful stretch of canal, often overhung by trees following the delightful valley of the River Dane.
There are pleasant moorings with picnic tables & BBQ just before Bridge 176.

As you descend into Middlewich there are 4 locks to be negotiated before you turn off right down the Middlewich Branch Canal. The canalside area of Middlewich is a haven of peace below the busy streets. The town has been extracting salt since Roman times, and there is an interesting town trail north of Bridge 172. There are various pubs canalside along this stretch.
As you go under the Bridge on the Middlewich Branch you encounter another lock, and after Bridge 27 as you head out of town there is another lock- Stanthorne Lock, and then you can relax & enjoy the scenery in the next lock free section of the canal.

This attractive & often under rated canal provides some wonderfully tranquil rural moorings. This is a quiet section of the canal, passing through rich farmland interspersed with woods.
There are no towns and only one small village, so no pubs I am afraid until you reach the Junction of the Shropshire Union Canal at Barbridge where you'll find the Jolly Tar pub.
Turn right at the Junction and head towards Chester, you are joined by a busy road until it turns away at Calveley. There is a bar & grill here.
At Bunbury Wharf, 2 staircase locks require thought before action, they are 14 feet wide like all subsequent locks between here and Chester. The village of Bunbury is 1 mile south west of the Locks and has stores, butcher & take away fish & chips & a couple of pubs.

The Canal continues through the flat but green Cheshire landscape, the Cheshire cycle way following the canal here, and continues all the way into Chester.
Off to the left by bridge 113 there is a pub- the Poachers Pocket & in Waverton there is a shop.

You are now on the outskirts of Chester and some of you may wish to moor up here and turn around at Christleton, near bridge 121, near the Cheshire Cat pub, thus saving 6 hours of cruising time to negotiate the 10 locks down into Chester and back. There is a very convenient Park & Ride here which can take you into the city of Chester in a few minutes.
For those wanting to moor up in the centre of Chester, (it will be noisier there at night) continue on through the 5 locks to the turning point near Cow lane Bridge 123e, Chester city centre is easily accessed from here.

CHESTER-
There is a wealth of things to do in this Roman City which can be seen on foot, because of the amazing survival of the old city wall. You can walk right round Chester on this superb footpath.
There has been a church on the site of The Cathedral for over 1,000 years originally a Saxon Minster then rebuilt as a Benedictine Abbey this magnificent building is a national treasure in the heart of the city. Visitors can view the Norman arches and Gothic columns and the medieval shrine of St. Werburgh. The Cloisters and Church form one of the most complete medieval monastic complexes in the country.

Discover 1,000 of shops behind the facades of the black and white buildings, find high street brands to designer boutiques. Shop in Chester's Rows where 21st century stores thrive in a Medieval setting. Take home some Cheshire cheese which is one of the oldest recorded cheeses in British history and is even referred to in the Domesday Book.

Take a journey through the Butterfly house a 400sq meters tropical house and is home to more than 30 species of butterfly from South America, Africa and South East Asia. One of the most critically threatened species around, the Philippine Crocodile is new to Chester Zoo and a breeding programme is in place for this species to ensure its long-term survival.
The Chester Visitor & Craft Centre, is open Mon-Sat 9-5, and has working craft shops and cafe.

Chester Heritage Tours – see highlights of Historic Chester from an open top 1930s vintage omnibus. Or experience Chester in an open top bus, the tour takes 55 minutes.
Chester Market in Princess Street is that site of an undercover market with up to 100 stalls selling fresh produce, and conditions the tradition of a market in the city that started in the 14th Century.
Open Mon-Sat 8am to 5pm.

For those continuing on to the finish of the canal at Ellesmere Port, continue on through Chester right through the middle of the town. Passing the site of an old lead works and a great variety of bridges, the navigation approaches the old city and suddenly curves round into a very steep rock cutting. Soon the Northgate staircase locks are reached , at the bottom is a sharp right turn to Tower Wharf, a good place to tie up for the night. Northgate Locks are hewn out of solid rock, and these impressive locks lower the canal by 33 feet.
There is a handy store next to Bridge 128.

Sweeping northwards along the lock free pound from Chester to the Mersey, the canal enters open country as it crosses the Wirral.
Turn around near bridge 147, as you cannot go onto the Manchester Ship Canal.

Blue Planet Aquarium is west of bridge 140a. It is a new aquarium with 2 floors of interactive exhibits, themed restaurant, Caribbean reef, Amazon Jungle and shop.
Easily reached by bus from Ellesmere port, Birkenhead is worth a visit. Birkenhead Park has benefited from an £11m restoration, and the gardens inspired the designs for Central park in New York.

At Birkenhead Tramway & transport Museum you can travel back in time on either a genuine Hong Kong Tram or the beautifully restored 1901 Birkenhead Tram. Also see the Baxter collection of cars and motorcycles. . Open April to Oct Sat & Sun 1-5pm, also Wednesday – Friday during School summer holidays & Easter.

Historic Warships at Birkenhead- is a chance to experience what life was really like aboard frigates HMS Plymouth and Onyx (both Falklands War veterans). Also see HMS Bronnington the mine hunter once commanded by HRH The Prince of Wales, & also see the only WW11 U-boat to be sunk by the Allies & raised from the seabed after 48 years.
(1st 6 weeks of year open Sat & Sun only)