ELLESMERE PORT AND RETURN FROM WHITCHURCH

There is a wealth of things to do in the Roman City of Chester which can be seen on foot, because of the amazing survival of the old city wall. You can walk right round Chester on this superb footpath. 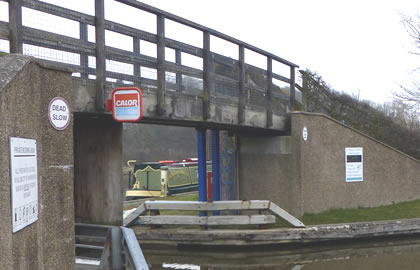 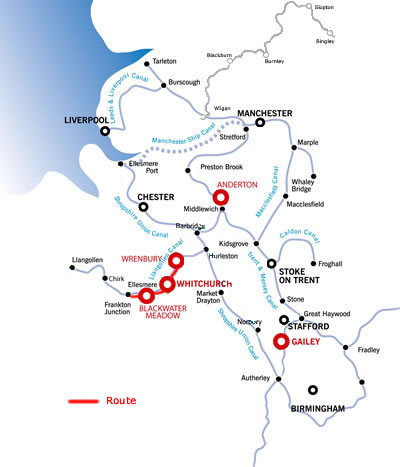 From Whitchurch marina turn north and you will soon reach the Whitchurch arm which is a little cul de sac canal leading to the town of Whitchurch.
Leaving Whitchurch you travel up to the Grindley Brook Locks, these famous staircase locks have made this a canal monument.
The 3 staircase locks are closely followed by 3 more locks, a friendly lock-keeper is on hand to help from April-Oct 8.30 am to 18.30.

By the Locks is the Lockside Stores, selling local produce and with tea & coffee & snacks served in the adjacent cafe, which has internet access.

You can moor up just past the locks for the night as it is 2 hours cruising to here.

The Horse & Jockey pub is near the bottom lock.

Further on is the village on Wrenbury, access can be reached from Bridge 20 or 19, about a ¼ mile walk. There are some thatched magpie cottages around the village green.

The Dusty Miller pub is by the Lift bridge and the Cotton Arms is just down the road from the Bridge.

The lift bridge at Wrenbury is a push button, and you will need to close the road off with the gates.

There are 3 locks at Baddiley but apart from that the countryside is flat, rich farmland.

You can moor up after a couple of hours cruising by Halls lane bridge 12, and take the track to Ravensmoor where you will find the Farmers Arms serving real ale & meals.

There are 2 locks at Swanley but no more until you reach the end of the Llangollen canal at Hurleston, where there are 4 in quick succession. Hurleston reservoir is off to the left.

At Barbridge Junction you carry straight on and head towards Chester, you are joined by a busy road until it turns away at Calveley. .

Off to the left by bridge 113 there is a pub- the Poachers Pocket.

You are now on the outskirts of Chester & there is a very convenient Park & Ride here which can take you into the city of Chester in a few minutes. Moor up by Christleton Bridge 122, if you don't want to go down the 5 locks that take you down to the City centre.

For those wanting to moor up in the heart of Chester continue on through the 5 locks. Chester city centre is easily accessed near Cow lane Bridge 123e.

It is 7.5 hours to here from Barbridge Junction.


Chester Roman Amphitheatre is the largest in Britain, used for entertainment and military training by the 20th Legion, based at the fortress of 'Deva' (Chester).

Take a journey through the Butterfly house a 400sq meters tropical house and is home to more than 30 species of butterfly from South America, Africa and South East Asia. One of the most critically threatened species around, the Philippine Crocodile is new to Chester Zoo and a breeding programme is in place for this species to ensure its long-term survival. . Tel 01244 380280.

Chester Market in Princess Street is that site of an undercover market with up to 100 stalls selling fresh produce, and continues the tradition of a market in the city that started in the 14th Century.
Open Mon-Sat 8am to 5pm.

Sweeping northwards along the lock free pound from Chester to the Mersey, the canal enters open country as it crosses the Wirral and enters Ellesmere Port.

It is 3.5 hours to here from Chester.

At Birkenhead Tramway & transport Museum you can travel back in time on either a genuine Hong Kong Tram or the beautifully restored 1901 Birkenhead Tram. Also see the Baxter collection of cars and motorcycles. . Open April to Oct Sat & Sun 1-5pm, also Wednes – Friday during School summer holidays & Easter.

It is 21 hours back to Whitchurch, so cruise for about 7 hours a day.