You can do this route from :
Nantwich Marina. 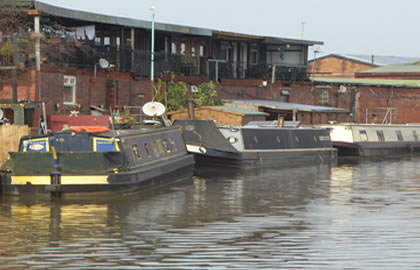 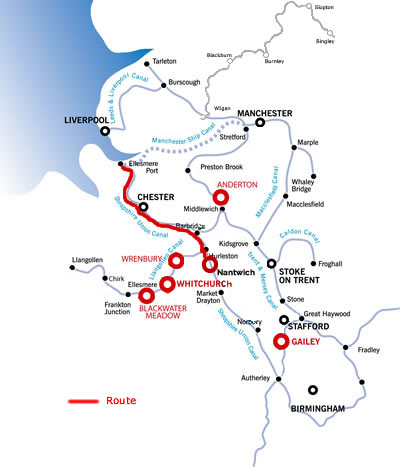 From Nantwich marina head north and you will soon pass the Hurleston Junction on your left where the Llangollen canal meets the Shropshire Union. Ignore this turning and head straight on, and soon you will also see the Barbridge Junction where the Middlewich canal goes up to the Trent & mersey, again ignore the turning and keep straight on towards Chester.

The countryside is flat, rich farmland.

The Davenport Arms is at Calveley by bridge 104.

Bunbury Water Mill is up the hill from Bunbury Wharf, & is open Easter-Sep & gives guided tours around its fully restored watermill.

It is 2 hours to here so a good place to stop for the night.

The next settlement of note on the Shropshire Union is Christleton, a delightful village with a green and lots of old houses, just on the outskirts of the city of Chester. Christleton has moorings and a canalside pub called the Old Trooper.

You are now on the outskirts of Chester & there is a very convenient Park & Ride here which can take you into the city of Chester in a few minutes. Moor up by Christleton Bridge 122, it is 4.5 hours to here .

Continue on through the 5 locks into the City of Chester.
Moorings in Chester are as follows:
Chester after Bridge 123D to The Frog and Nightingale PH (14 days)
Chester after Cow Lane Bridge 123E to Chester City Walls (48 hrs) Good access to City from Bridge 123e
Chester between Bridge 123L and water point before dry dock (7 days on rings)
But be aware that the pubs can be a bit noisy at night!
It is 6 hours to here from Bunbury.

Chester Roman Amphitheatre is the largest in Britain, used for entertainment and military training by the 20th Legion, based at the fortress of 'Deva' (Chester).

Chester Market in Princess Street is that site of an undercover market with up to 100 stalls selling fresh produce, and conditions the tradition of a market in the city that started in the 14th Century.
Open Mon-Sat 8am to 5pm.

Sweeping northwards along the lock free pound from Chester to the Mersey, the canal enters open country as it crosses the Wirral.


At Birkenhead Tramway & transport Museum you can travel back in time on either a genuine Hong Kong Tram or the beautifully restored 1901 Birkenhead Tram. Also see the Baxter collection of cars and motorcycles. . Open April to Oct Sat & Sun 1-5pm, also Wednes – Friday during School summer holidays & Easter.


Make your way back to Christleton to moor for the night, you will have cruised for 8.5 hours

Day 4
Day 5
It is 7 hours back to Nantwich marina, so make your way back