PEWSEY AND RETURN FROM HILPERTON

The Vale of Pewsey – tranquil, spiritual and ancient.

The Vale is a beautiful area in the eastern half of the county with the village of Pewsey at its centre. It is a walking and exploring landscape, studded with pretty and unspoilt villages and forms the western extent of the North Wessex.

Devizes is a historic market town with a colourful Medieval past, wealth of history and architectural heritage with more than 500 listed buildings and a large Market Place in the heart of the town. Take a tour of Wadworth Brewery, sample their famous 6X and meet the Shire horses that still deliver to pubs in the town.

See the 29 locks of the Caen Hill flight on the Kennet and Avon canal, a triumph of Georgian engineering. 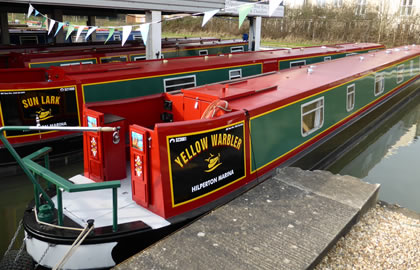 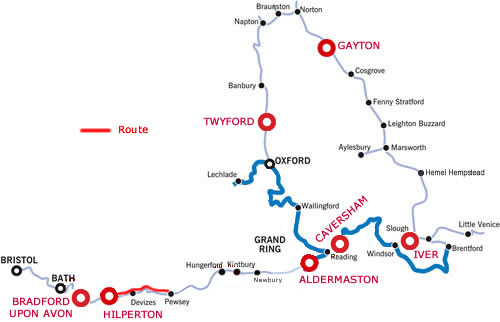 The town's lengthy history is recorded in the museum, which tells the fascinating story of Trowbridge's people and past. The museum has also won the Association of Industrial Archaeologists award for 'best site visited' in 2008 & it is located in the last woollen mill in Trowbridge, which closed its doors as a mill in 1982. The fascinating collections in the Trowbridge Museum are accessed via The Shires Shopping Centre - built on the site of part of the woollen mill and home to a diverse selection of more than 50 shops all on one level and undercover

Pass Hilperton marina on your right, then you know you are going in the right direction to Devizes!

It is a leisurely day today, so time to explore Devizes .

From Devizes Wharf you set off again, with not such an energetic day as yesterday, there are no locks!

As you leave Devizes the route is lock free as you cruise through rural surroundings, the village of Bishops Cannings is accessed from Bridge 133 with a pub in the village, and All Cannings from bridge 128 where there is a small shop & pub. More small villages are passed but there is hardly any habitation canalside as you pass through the Vale of Pewsey. A miniature suspension bridge carries a private footpath from Stowell Park across the canal, as is the only surviving example of its kind. Stowell park House was built in the early 19 century, and can be clearly seen from the canal.

At Wilcot bridge 117 you can get to the small village of Wilcot where the Golden Swan Pub stands beyond the green at the far end of the village. A one handed ghost is said to haunt this pub.
Pewsey Wharf is a mile from the town centre but has a pub canalside. There are shops in the town which can be accessed to the north of Bridge 114. To the north, hills descend to the waters edge and to the south the land opens out, giving fine views over the Vale of Pewsey.

It is nearly 4 hours to Pewsey from Devizes, so moor up for the evening.