HISTORY
The Regent's Canal was built to link the Grand Junction Canal's Paddington Arm, which opened in 1801, with the Thames at Limehouse. One of the directors of the canal company was the famous architect John Nash who was friendly with the Prince Regent, later King George IV, who allowed the use of his name for the project. The canal was opened in two stages, from Paddington to Camden in 1816, and the rest of the canal in 1820. Today The Regent’s Canal is one of London’s best-kept secrets and is a peaceful and leafy oasis

Only minutes away from the bustling Paddington Station Little Venice is an oasis of leafy calm. Little Venice was coined by the poet Robert Browning, and has now come to mean the whole area to the south of Maida Vale. The neighbouring tree-lined streets and grand Georgian and Victorian houses make it one of London’s most picturesque spots. Little Venice is home to a number of waterside cafes, pubs and eateries.

The Puppet Barge is moored at Little Venice and is a remarkable water-borne theatre venue. The barge has been moored there since 1982 and has produced a verity of marionette and animation shows. The barge is open for productions from October to July, with regular performances on Saturday and Sunday and a daily during the school holidays.

Lords Cricket Ground, Marylebone Cricket Club MCC, was founded in 1787 and is probably the most famous cricket club in the country. Cricket fans can have the opportunity to go behind the scenes where you can see many of the most famous sights in world cricket. Why not end your tour of Lords and have a meal at then Lord's Tavern.

Moor up a while a take a stroll though the leafy and peaceful boulevards of Maida Vale where the area seems to belong in a different, less crowded side of London. The most famous of these streets is Abbey Road, where the Beatles recorded their later albums, and took the photo for one of the most iconic album covers of the twentieth century.

No visit to the area would be complete without a walk around Regents Park which was designed by John Nash. The park covers 395 acres and includes within it's boundaries excellent sporting facilities, an open air theatre numerous cafes and restaurants and best loved of all London Zoo. The zoo was founded in 1826 and is an international scientific, conservation and educational charity whose mission is to promote and achieve the worldwide conservation of animals and their habitats.

If you want some exercise take the walk to the top of Primrose Hill where you will have a fantastic panorama across the city. This popular village like location is full of hip cafes, restaurants,boutiques and even a celebrity or two.

Camden market is now the fourth most-visited tourist attraction in London and is one of the largest street markets in the UK. There are in fact various markets located in Camden Town which are collectively known as Camden Market. This area around Camden Lock was first developed in 1791 by the Earl of Camden. There are also hundreds of designer workshops, studios, stalls, shops, cafes, restaurants and bars.

For an insight to how life would have been like on London's waterway pop into the London Canal Museum. See inside a narrowboat cabin, learn about the history of London's canals, about the cargoes carried, the people who lived and worked on the waterways, and the horses that pulled their boats. Or for something completely different The Ragged School Museum which is housed in what was once London's biggest Ragged School. This is a popular, family-friendly museum which welcomes people of all ages to taste a slice of Victorian life. Located right along the Regent's Canal
the Museum offers a memorable experience of the poor of the East End.

Canary Wharf is the new financial centre located in the East End of London and is well worth a visit to see an example of regeneration which provides a working, shopping and leisure environment. There are countless shops, bars, restaurants and two large shopping malls providing a wide variety of goods ranging from those selling luxury brands such as Tiffany and Breitling. The mall runs under Canary Wharf Tower and Canary Wharf DLR Station to Cabot Square to the west. The main feature of Canary Wharf is the tall white Canary Wharf Tower, this has 50 stories and stands 235 metres.

To view this area and the Docklands take a ride on The Docklands Light Railway making travelling around docklands easy. Views from the railway are stunning and the experience is heightened by the elevated sections.

Just West of the Canary Wharf area lies Limehouse Basin and can be reached from it by walking along the Thames Path. The basin and surrounding area have been redeveloped over the past few years with upmarket apartment developments. Many canal boats, river boats and house boats use the basin as a convenient mooring location. 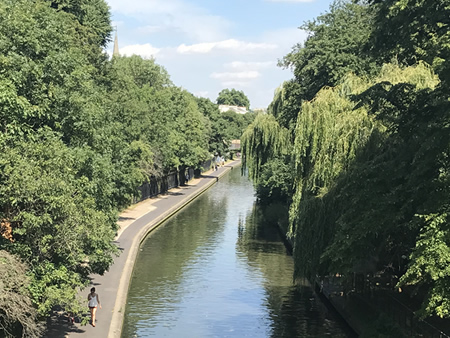