Cruising on a river is more or less the same as navigating the canal system and since they frequently interconnect you can reach some of our favourite rivers on a Canal Boat Holiday.

River navigations are considered easier than the canals mainly because they have less locks and there is more open space which makes steering easier. There may even be less work to do as some river locks tend to be either automated or operated by lock keepers.

Rivers can be navigated by inexperienced canal boaters as full training will be given at hand over. Your canal boat will be properly fitted for river cruising and your equipment will include an anchor and an adequate length of chain.

As with the canal system there are some rules and regulations to remember when navigating a river but these as few and mainly just common sense. You may meet commercial vessels and Skippers should know the basic rules of navigation.

Always keep a good look out on rivers and do not forget to look astern from time to time as a large vessel may about to overtake you.
If you meet a boat going in the opposite direction, you should move to the right, pass port to port.

It you intend to overtake a slower boat, then wait until the path ahead is clear, then overtake, leaving the boat you are overtaking to the right. Remember when going upstream the current is against you and overtaking may take longer than you expect.

Motor boats and most canal boats must give way to sailing boats and all unpowered craft.
Its is also advisable to remember that there is always a current on the rivers.

Three of the most most popular rivers you are able to cruise on a Canal Boat Holiday are The River Thames, The River Avon and The River Severn.

The River Thames is probably one of the most famous rivers in the world and flows for over 200 miles from source to sea. The rights to navigate the River Thames were laid down in Magna Carta but the rivers history extends much further than that.

Festivals and rituals such as the Oxford and Cambridge Boat Race, Henley Regatta and the annual Swan Upping give the river its rich history.
Explore the River Thames and all of the riverside attractions that London has to offer on a Canal Boat Holiday from Aldermaston. During your Canal Boat Holiday on the River Thames visit Windsor Castle one of the Queens favourite weekend retreats and the oldest and largest occupied castle in the world.

Aldermaston is only about one and half hours away from central London so it is an ideal choice for a Canal Boat Holiday away from the city. All of our canal boats leaving Aldermaston have a Gold Licence so you do not need to purchase a permit to cruise the River Thames.

The word avon derives from the Welsh for river and because of this many English rivers have been named Avon. The River is controlled by two independent waterway authorities, from Tewkesbury to Evesham, the river is administered by the Lower Avon Navigation Trust and from Evesham to Stratford, the Upper Avon Navigation Trust is in responsible.

Canal Boat users wanting to cruise the River Avon will need to purchase a separate licence for each section and these can be obtained from lock offices. The Avon Ring is part canal and part river and this circular routes combines the Avon and the Severn, the Stratford Canal and the Worcester and Birmingham Canal.
The route is an ideal mix of town and country and the many canal locks means it is perfect for a weeks cruise.

The River Avon, Bristol runs for 75 miles from its source close to Chipping Sodbury to Avonmouth flowing through the stunning counties of Gloucestershire, Wiltshire and Somerset. From our Canal Boat Holiday base at Hilperton you can cruise the Kennet and Avon Canal and onto The River Avon.

This section of the river flows for nearly 14 miles into Bristol then onto the Bristol Channel and the open sea. Visit the wonderful city of Bristol which is steeped in maritime and engineering history much of which is attributable to Isambard Kingdom Brunel.

This stretch of the river is one of the UKs most secluded cruising rivers as it meanders past ancient towns and through picturesque countryside. It flows through Stratford, Evesham and Pershore to Tewkesbury, where it meets the mighty River Severn. Its surroundings have changed little since the days of its most famous son, William Shakespeare.

The Avon is a popular river with both motor cruisers and canal boats. It is possible to cruise The River Avon from our Canal Boat Holiday bases either Worcester or Alvechurch straight into the heart of Stratford on Avon.
The River Severn flows from the mountains of Wales at Plynlimon for 220 miles before reaching the Bristol Channel and the sea. The river is world famous for its bore, which is the second highest tide anywhere in the world with a range which can be in excess of 50 feet.

The locks on the River Severn are large wide locks and you will be surrounded by high walls and will not be able to step on or off your canal boat. On a Canal Boat Holiday from either Worcester or Alvechurch cruise to the Stourport Basin which is located on the banks of the River Severn in the picturesque Severn Valley.
The Basins are home to nearly 100 canal boats and yachts and for an inland location it has a surprisingly seaside atmosphere.

There are smaller but by no means less worthy rivers that you can explore whilst on a Canal Boat Holiday.

Book a Canal Boat Holiday from Market Harborough and cruise The East Midlands Ring along the River Soar to Nottingham. The River Soar meanders its way through delightful scenery and many attractive villages, such as Mountsorrel, and is almost entirely rural. The River Soar continues the line of the Grand Union Canal northwards from Leicester to the River Trent.

The River Weaver is navigable for 20 miles between Winsford in Cheshire and Runcorn on the Manchester Ship Canal. Book your Canal Boat Holiday from Anderton Marina on the Trent and Mersey Canal and you will be transported onto this river in a very unusual way. Built in 1875 by Edwin Clarke the Anderton Boat Lift is known as the cathedral of the canals.

The 60ft high hydraulic lift system transports canal boats and working boats from the Trent and Mersey Canal to the River Weaver and vice versa. The lift was built when the salt industry was still an important part of the Cheshire way of life the lift provided a direct link between the canal and river in a bid to make both waterways more profitable. 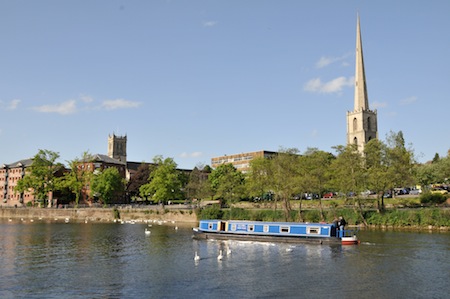