During the Industrial Revolution the ‘Black Country’ was a manufacturing landscape. Factories and foundries lined a network of canals. Barges carried coal, sand and limestone to works that made everything from heavy bridges to delicate jewellery.

The Stourbridge area has been a major glassmaking centre for 400 years and there is still a thriving industry in Stourbridge today. 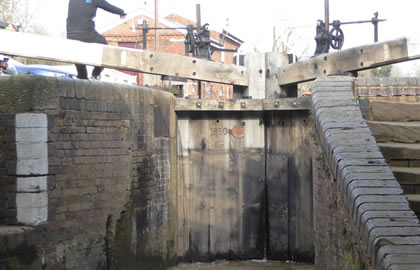 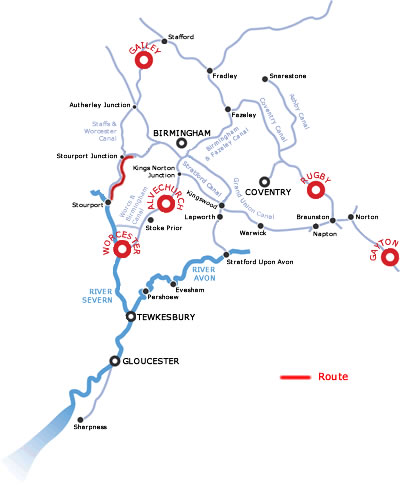 You soon leave Stourport behind and approach Kidderminster with its smart new developments.
Beyond Falling sands Bridge look out for the steam trains on the Viaduct on the Severn valley Railway. There are good moorings at Weavers wharf between bridges 15 and 16 , with supermarkets & cafes nearby. There are many pubs in Kidderminster, including the King & Castle east of bridge 15 , and a Frankie & Bennys outlet right beside Weavers Wharf moorings,
It is 2.5 hours to here

Wolverley is north west of bridge 20 and is a fascinating village once dedicated to the nail-making industry. The church stands on a sandstone rock so steep that the building has to be approached by a zig-zag path cut through the constantly eroding stone. In the base of this outcrop is the remains of a smithy's shop. Many of the houses nearby are partly carved from the rock, their dark back rooms actually caves. There are pubs in Wolverley inclding The Lock canalside and in the village the Queens Head.

At Debdale lock a doorway reveals a cavern cut into the solid rock, which may have been used to stable towing horses. The nearby village of Cookley has an excellent Fish & Chip Shop (Cookley Fisheries) and a short walk west of bridge 26 is the Anchor Inn.

The canal continues through secluded woodland and pretty locks to the very pretty village of Kinver, where you can stock up on provisions or get some fish & chips! It is worth having a look at the fascinating Rock houses, carved out of the cliffs and in continuous occupation for 150 years until 1935.(Walk up Stone lane close to the White Hart Hotel until trees appear on your left, then follow the path into the trees, the rock houses are at Holy Austin Rock). Pubs in Kinver include the Cross Inn and Ye Old White Hart Hotel.

Turn right here along the Stourbridge Canal at Stourton Junction, and you immediately come across the the 4 Stourton Locks .
A mooring has been provided for those wishing to visit the Tudor Crystal Factory Shop.

The Coalbourne Brook Bridge used to carry the Kinver Light Railway. The Maverick Drinking House is to the left of the bridge.

As the canal makes a sharp turn into Stourbridge, Ironworks Wharf can be seen.
The Canal ends by the very fine Bonded Warehouse building built in 1790, restored as HQ of the Stourbridge Navigation Trust.

The town centre is a few minutes walk to the south. The town is almost entirely 19th Century relecting the great expansion of the glass making industry during that period.
The first glass makers came over from France in the 1600's .
Holloway End Glassworks is near the end of the Stourbridge Arm and is one of the surviving original factories dating from the 17th century. Go to the tourist information centre for the Crystal Trail leaflet, also see the website http://www.glassquarter.org.uk

Follow the Town Arm of the Stourbridge Canal to discover why Stourbridge was ideal for glassmaking. Find out about the people who lived and worked here and visit Britain’s most complete working ‘glass cone’.
- See more at: https://www.discoveringbritain.org/activities/west-midlands/walks/stourbridge-canal.html#sthash.VAaIDoZZ.dpuf

The elegant Redhouse Glass Cone is one of the few still surviving in the country and is 100 feet high, right by the canal. It was built in 1788-94 and housed a furnace, visitors can see glassmaking and glass blowing and cutting and visit the Crystal Glass shop one of the largest stockists of English Crystal in the U.K.

The Broadfield House glass Museum is 1 mile north of Glasshouse bridge , and celebrates the history of glass-making.
There are many pubs in Stourbridge

It is 9 hours back to the marina , so do a few hours today and get up early on the last day to do an hour or so