The Stourport Ring visits no fewer than three cities of contrasting colours, Wolverhampton, industrial Birmingham and the ancient City of Worcester taking in both urban and countryside scenery.

Offering an interesting mix of river and canals, this route will take you through the historic city of Worcester, along the River Severn to one of the prettiest canals in England- The Staffordshire & Worcestershire


Take a Steam train ride in the Severn valley and cruise through Birmingham to the superb 26 acre outdoor Black Country Museum, the cosmopolitan Gas Street Basin with all its cafes and bars, and Cadbury World at Bournville. 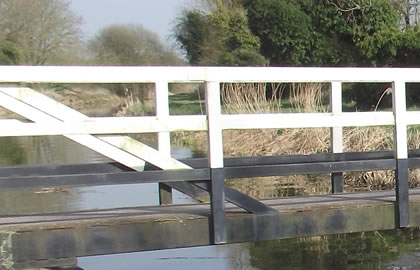 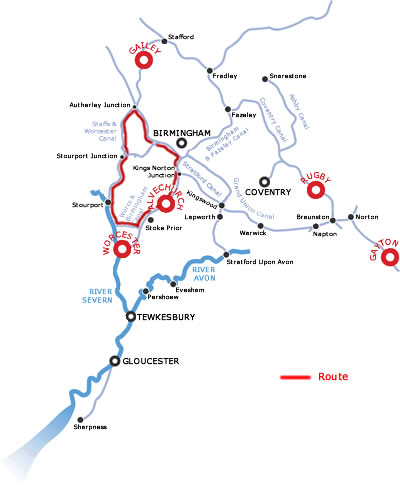 Novices should take 10-14 days to complete this ring, but experienced boaters can do it in 1 week, but if you want to stop off & explore you will need 10-14 nights.
Very occasionally the River Severn can become un-navigable due to flooding following extreme rainfall.
Opening hours for the River Severn and Gloucester & Sharpness Canal from 26th March 2018 – 24th March 2019

The Canal and River Severn will be closed on Tuesdays and Wednesdays. During this period the following Locks will be unmanned: Lincomb, Holt, Bevere, Diglis and Upper lode.

Lock bookings for the River Severn from can be requested by calling Gloucester Lock, 24 hours prior to passage on 01452 310832.


If time allows take a train ride on the Steam Railway. The Severn Valley railway is a full-size standard-gauge railway line running regular steam-hauled passenger trains for the benefit of visitors and enthusiasts alike between Kidderminster in Worcestershire and bridgnorth in Shropshire, a distance of 16 miles.

You pass by the Stourbridge Canal and at the far end of the aqueduct near here is a curious narrowboat-house known as the Devil's Den, cut into the rock. Further on after Rocky lock rooms have been carved into the sandstone.

The canal forks and you should keep left to avoid the marina, the countryside becomes flatter and more regular. There are occasional locks and canalside pubs including a 2 step staircase at Botterham lock which has 4 locks in total.
You can moor for the night after the locks, as once you reach Bridge 43 it is more built up, but there are pubs by bridges 43 & 45, and shops near 44.

Have an early breakfast & prepare for a day with lots of locks!
After Bumblehole Lock you reach the 3 Bratch Locks just north of Wombourne. These locks are open from 8am to 8pm and you should carefully study the operating instructions before use, or consult the lock-keeper if in any doubt.

You are soon approaching the outskirts of Wolverhampton, there is a handy supermarket near Compton Lock.

You turn off right onto the main line of the Birmingham Canal. 21 locks will carry you up into the heart of Wolverhampton.

Dunstall Park racecourse is passed on the right.

After the last lock you can moor up in the Broad Street basin, as there are useful water and refuse points and plenty of takeaways and shops close by. The Wulfrun shopping Centre is in the city centre just off Dudley Street also the Mander centre with over 100 shops.

Continue down the main line of the Birmingham canal, ignoring the left turn up the Wyrley & Essington Canal, and later on the Wednesbury Oak Loop .

After the short Coseley Tunnel you will see a canal leading off to your right which you should take towards Dudley and the Black Country Museum. It is worth mooring up near this superb 26 acre outdoor Museum which has been built around a re-constructed canal village, with a pub, shops and an inland port. You can ride on a trolley bus or tram, try sweet making , metal working or glass cutting, experience an underground coal mine & meet the characters in the shops and houses.

Turn right along the Wolverhampton level canal, it is lock free for a while now, ignore the right turning at Oldbury Junction, and turn right at the Spon Lane Junction. There are 3 locks at Smethwick, but after these it is lock free again. Keep on the Birmingham main line towards the Gas Street basin which is where you will join the Worcester & Birmingham Canal again on your way back to Alvechurch.

For those on a 10-14 night cruise it is worth mooring up in the Gas Street basin which is in the heart of Birmingham's canal network, and has been redeveloped into a unique experience where traditional narrow boats moor up next to cosmopolitan cafes and bars. The surrounding area is a vibrant arts & entertainment area and there are many shopping options within a short walk.

Continuing on down the Worcester & Birmingham canal through Edgbaston & Selly Oak, you will reach Bournville where there are visitor moorings & you can visit Cadbury World, a must for adults and children alike!! You do need to book beforehand Tel. 0121 451 4159 . It is signposted from the canal. There is an exhibition dedicated to the history of chocolate, audio visual displays, Victorian Birmingham & a Jungle to explore!

After Bournville continue on at the Kings Norton Junction, ignoring the right hand turn to the Stratford on Avon canal.

Moor up here for the night if Cadburys World didn't tempt you, Kings Norton still survives as a village .
Bridge 71 is best access for shops.

It is a long day today, and a lot of locks!

Soon you will come to Wast Hills Tunnel, at 2726 yards it is one of the longest in the country.

After the tunnel you will have left Birmingham behind with the Bittell Reservoirs off to your right.

After the Tardebigge tunnel you will soon reach the Tardebigge Locks. These represent the Boaters Rite of Passage, as these 30 locks, combined with the nearby 6 Stoke Locks, represent 36 locks in 4 miles, and other groups of locks will pale into insignificance in comparison.

Tardebigge reservoir is near here, and the old Engine house is now flats after being restored.

Descend the Tardebigge flight set in very pretty rural surroundings, which can take 4-5 hours, but there are places in between the locks where you can moor up & have a breather!

At the bottom of the locks is the Queens Pub- Canalside at bridge 48, with good food and a lovely waterside terrace. You can moor here for the night or continue to Stoke Wharf through 5 of the Stoke Locks .
It is 9.5 hours to Stoke Wharf which is a pretty Canal settlement .


The 6 Stoke locks are slightly more interspersed and the canal continues through very rural surroundings towards the 5 Astwood Locks.

It is worth stopping near bridge 41 before these locks, as you can walk into the village of Astwood and find the Bowling Green pub, which has a Bowling green in the garden!

You climb down through the countryside towards Worcester. After the 6 Astwood locks there is a short tunnel at Dunhampstead to negotiate, with no more locks until you get to the 6 Tibberton locks. Soon you are passing the outskirts of Worcester.
After the Astwood Locks is the turning to the right for the Droitwich Canal and you can make the cruise shorter by turning here, see details at the end of these notes.

It takes about 8 ¼ hours cruising to get here. From the Wharf you can walk into the city centre of Worcester, with its splendid cathedral dating from 1074, & museums, art galleries and half timbered buildings. The museum at the Royal Worcester Porcelain works is well worth a visit, as it contains the most comprehensive collection of Worcester Porcelain in the world.

There are many bars, pubs and restaurants and take-aways around Worcester, and plenty of shops to stock up on supplies, or for a little retail therapy.

You can moor up anywhere up to the Diglis basin, once through that you are on the River Severn!

It is 5.5 hours back to Stourport

You can cut this cruise a bit shorter by turning right after the Astwood Locks along the Droitwich Canal and missing out the Worcester section, it takes you across to the River Severn and saves about 2-3 hours cruising, so if you have taken too much time sightseeing and you are running out of time you can make this decision as you pass the turning for the Droitwich canal !!