STRATFORD UPON AVON FROM STOURPORT ON SEVERN

Worcester has plenty to offer the visitor, including the imposing cathedral which dates from 1074.
In Friar Street is Greyfriars, dating from 1480 this is one of the finest half-timbered houses in the country. Charles II escaped from here after the Battle of Worcester in 1651.

The historic town of Tewkesbury with its many attractive & ancient buildings including of course, it's cathedral-like Abbey, which is reckoned to be one of the finest Norman churches in the Country.

Stratford on Avon has endless streets of low-timbered buildings. The whole town is full of Shakespeare relics and buildings, like Ann Hathaway's Cottage, Shakespeare's birthplace, and Halls' Croft where his daughter lived. 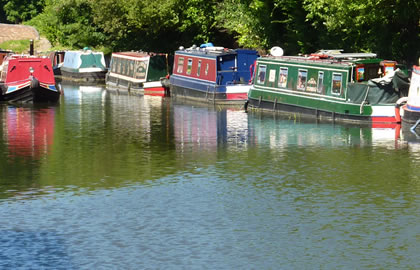 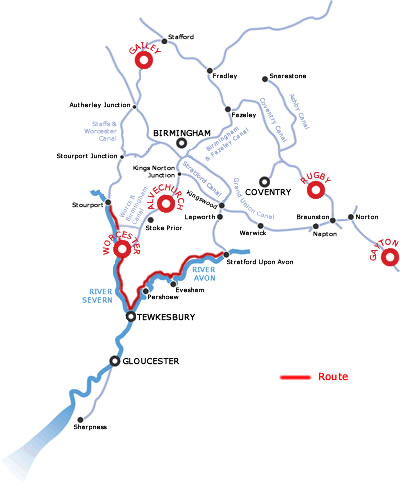 Cruising on the River is very different to the Canals, there is no continuous towpath and therefore no right to land and moor up as you please. The scenery is one of quiet water meadows & prolific bird life. Moor up only at recognised sites . You are responsible for assessing whether it is safe to use the waterway in flood or strong stream conditions, but note that CRT may decide not to operate its locks.
Opening hours for the River Severn and Gloucester & Sharpness Canal from 26th March 2018 – 24th March 2019

The Canal and River Severn will be closed on Tuesdays and Wednesdays. During this period the following Locks will be unmanned: Lincomb, Holt, Bevere, Diglis and Upper lode.

Lock bookings for the River Severn from can be requested by calling Gloucester Lock, 24 hours prior to passage on 01452 310832.

Leave the Stourport Basin through the closest locks to you, and turn left to go down the River Severn.

The River winds its way through lovely peaceful countryside until you reach Holt Fleet , which takes about 2.5 hours, and you can moor up with a couple of pubs just after the bridge.

Continue on passing the quiet countryside passing the entrance to the Droitwich Canal.
Soon you will approach Worcester. There are various moorings by the racecourse on the left, and just after Worcester Railway bridge.
Worcester has a splendid cathedral dating from 1074, & museums, art galleries and half timbered buildings. The museum at the Royal Worcester Porcelain works is well worth a visit, as it contains the most comprehensive collection of Worcester Porcelain in the world.

Passing the Diglis Basin is the end of the Worcester and Birmingham canal.

The small towns of Kempsey and delightful towns like Upton upon Severn are psssed amongst quiet countryside, which is situated on the riverbank with various pubs close by.
There is moorings as Upton on Severn on the right before Upton Bridge. This delightful town is well provided with fascinating old timbered and early Georgian buildings. The best area is near the river . During the summer this vibrant town is host to a series of music events, www.uptonjazz.co.uk and uponbluesfestival.co.uk.

As Tewkesbury approaches, turn left just after King John's bridge, avoiding a shallow spit projecting from the junction with the River Avon.

The Avon Lock is operated by a resident Lock-keeper, & is only open from 9am to 6pm, or until 8pm in May-August. In the winter you can use the lock yourself. He is also closed for lunch between 1-2pm. last locking 15 minutes before closing time. You will need to buy a Lower Avon navigation trust licence to cruise on the River Avon.

You can moor up in Tewkesbury it is 6 hours cruising to here.

Time to explore the historic town of Tewkesbury with its many attractive & ancient buildings including of course, it's cathedral-like Abbey, which is reckoned to be one of the finest Norman churches in the Country. The abbey was completed about 1120, and is splendid both inside & out. Its magnificent and beautifully decorated tower stands at 130 feet high and 46 feet square, and is the largest Norman tower in existence.

The most unusual buildings in Tewkesbury are the row of medieval shops near the Abbey, in fact most of the medieval aspects & character of the town have survived to this day.
One of the more unusual aspects of the town is the maze of small alleyways leading off from the main street. There is a couple of museums, and the Tourist information office can tell you more about other attractions.

The Battle of Tewkesbury fought here in 1471 was the penultimate battle in the War of the Roses.

There are many pubs and hotels in Tewkesbury.

From Tewkesbury cruise along the River Avon which twists and turns through the lovely vale of Evesham, passing small villages like Bredon with its many fine timbered buildings. Just beyond the Severn Sailing club, beware of a weir which spills into the River creating a very strong cross current when the river in high. The same is true of the weir just past Pershore.

Pershore is a small market town with many well kept Georgian buildings set amongst the many fruit farms & market gardens that are scattered all over this area.

Just past Pershore is Fladbury, another picturesque village of half timbered cottages and houses. Craycombe farm, just north of Fladbury & Evesham Golf course, is a farm shop where you can buy fresh fruit and veg, local ciders & country wines, and home make cakes & preserves. There is also a gift shop, both are open all year.

The River continues on its meandering course past small villages including the lovely named Wyre Piddle, just opposite Tiddle Widdle island, and where you will find the Brewery that makes 'Piddle in the Hole' Ale!! (Wyre Piddle Micro-brewery is North west of the Anchor Inn. Open Mon-Fri).

The Anchor Inn here is ideal for mooring.

On your approach to Evesham, look out for the cable across the rive, this is Hampton ferry, the wire will be lowered when the ferry man hears 3 blasts of your horn.
In Evesham there are 3 lots of Visitor moorings along the River, as the Avon cuts a loop around Evesham, the last and most extensive are by Workman Gardens.
There are many pubs & restaurants in Evesham, and even a night club!

Evesham has many elegant Georgian houses and fine timbered buildings.

It is 5 hours cruising to here.

On your departure from Evesham take the centre arch at Workman bridge, avoid the weir just after Evesham lock, and then keep to the left for a short distance.
The Lock-keeper here sells Lower Avon Navigation trust Licences, he is open from 9-6 or 9-8 May to August. During the winter the lock is set for manual operation. Out of these hours you cannot go through the lock, nor during his lunch time 1-2pm!

Evesham Country Park at Twyford is a short walk on your left hand side as you approach Offenham on your right. This is a shopping & garden centre & also incorporates the Vale Wildlife Centre. There is a narrow gauge steam railway running through the 130 acre Park.

The River now heads away north approaching Bidford-on-Avon with its splendid bridge. The village makes a good place for mooring , there are a few pubs close by.
It is 3.5 hours to here

The river continues to meander its way as it enters Warwickshire and Stratford -upon-Avon is reached. There are moorings opposite the Royal Shakespeare Theatre by the recreation ground.
Stratford has endless streets of low-timbered buildings. The whole town is full of Shakespeare relics and buildings, like Ann Hathaway's Cottage, Shakespeare's birthplace, and Halls' Croft where his daughter lived, and numerous bars and restaurants.

Cruising time to here is 5 hours.

It is 27.5 hours back to Stourport so about 4 days cruising at 7 hours per day