TARLETON AND RETURN FROM ANDERTON

You can do this route from :
Anderton Marina.

Cruise from Cheshire to Lancashire, this route can be done over 10 days to make it a more leisurely cruise, you can also take a tram into the city of Manchester if you wish, but otherwise you avoid all major towns

In 1988 much of the centre of Stockton Heath was designated an area of conservation, so as to preserve its character, so there is something for everyone in this pretty town.

In Salford take a look at the Art Gallery and Museum, which is situated in the centre of Salford University Campus, or perhaps The Lowry Centre, situated at Salford Quays.

The Barton Swing Aqueduct carries you over the Manchester Ship Canal was built in the late C19th and designed by Sir Edward Leader Williams.

Worsley was a mining community, with coal having been mined here since the C14th, and this is evident in the scenery. 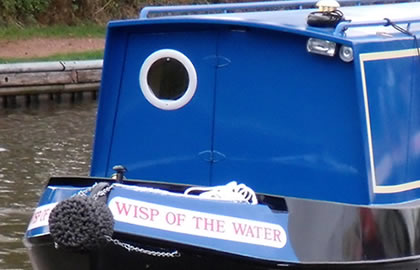 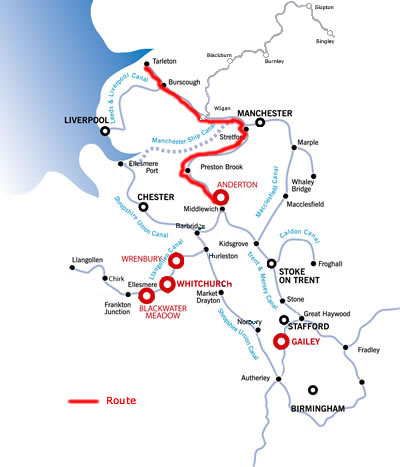 Once you have had your tuition, you will be setting off for the moorings for the night.

If you prefer to stay put for the night, there is a restaurant/bar called The Moorings on the canalside at Anderton, where children and dogs are welcome. There is also a shop at the marina, which stocks essential provisions. The nearest supermarket is in Northwich, a couple of miles away.
Leaving Anderton, you will be heading towards Barnton Tunnel, which emerges onto a hillside overlooking the River Weaver, with a fantastic view down to Saltersford Locks. Do make sure before you enter the tunnel, that there are no boats coming from the other side, as it is only wide enough for one boat at a time.

At the east end of the tunnel, you will see some handy shops, so maybe a good time to stock up, if you have not already done so.

Moving on, you will now enter Saltersford Tunnel, again, two boats cannot pass in this tunnel, so do take care when entering and leaving it.
Passage is timed - northbound is on the hour to 20 past , southbound is half past the hour for 20 minutes.
Once through the tunnel, you will again be in open countryside and not far from your mooring for the night which is by bridge 209.

Not too far from the mooring about 1/4 mile to the north of Bridge 209, so take the road to your right by the bridge, you might like to have a meal in The Holly Bush Inn, Little Leigh, Northwich. Food is served at lunchtimes and evenings, along with traditional ales. There is a large beer garden with children's play area, so the whole family can relax before settling down for the night, ready for tomorrow's journey.

You should now have travelled about 4 miles in 1.45 hours.

Today you will be making your way to Ashburton Road Bridge, 25 miles away, and with one lock en route.

On leaving Dutton Hall Winding Lock, you will be heading towards Preston Brook Tunnel, which is 1,239 yards long and has no towpath. (For tunnel times, please see Navigational Notes above). Once through the tunnel, you will branch off to the right to join the Bridgwater Canal, from where you can cruise to Stockton Heath, where you can moor up, stroll around the town, perhaps look around the shops in the Forge Shopping Centre, and have a meal in one of the many restaurants or bars.

In 1988 much of the centre of Stockton Heath was designated an area of conservation, so as to preserve its character, so there is something for everyone in this pretty town.

The next town you will cruise through is Lymm, where the streets come right down to the canalside, where on the towpath, there is a free ferry to the Barn Owl Inn. There is a convenient launderette in the town, and other small shops.

As you cruise on, the countryside rapidly disappears as you approach Sale, with its mixture of old and new industrial buildings. At Sale Bridge you will find The Robert Bolt Theatre and The Waterside Arts Centre, also a selection of pubs and a restaurant.

There is a tram station next to the canal in Timperley, which will take you into Manchester, if you so wish.

From here, you will reach Waters Meeting, where you will bear left towards Trafford Park, which is an ideal place to moor if you want to take a look around the Trafford Centre. This is reasonably near to the Ashburton Road Bridge – your stop for the night.

You will have been cruising for around 8 hours and covered 25 miles, and only one lock.

Set off today for Ranicar's Swing Bridge, which is about 20 miles away.

There are many interesting places along this next leg of your route, so you will need to decide what you would like to see, so as not to lose too much cruising time.

You might like to moor at Salford and take a look at the Art Gallery and Museum, which is situated in the centre of Salford University Campus, or perhaps The Lowry Centre, situated at Salford Quays.

Leaving here, you will cross the Barton Swing Aqueduct, which carries you over the Manchester Ship Canal. It was built in the late C19th and designed by Sir Edward Leader Williams.

About halfway between Salford and Worsley, at Parrin Lane Bridge, you will see a small 'lighthouse' as you approach. There is a pub near here, at Monton, called Cromptons At The Waterside, which serves good food and traditional ales.

Worsley was a mining community, with coal having been mined here since the C14th, and this is evident in the scenery. If you are interested, you can moor up and take a look around the area. On the canal, look out for Lord Ellesmere's Boathouse, which was built to house the Royal Barge that was used for Queen Victoria's visit in 1851.

Moving on, the canal becomes a little less busy and built-up as you approach Astley, on the way to Leigh, a mill town, where the canal changes from the Bridgewater canal to the Leeds and Liverpool canal.

A little past Leigh Bridge No. 11, on the left, is Pennington Flash Country Park. This is an ideal place to moor if you want to stretch your legs and go for a leisurely stroll, or a cycle ride around the 200 hectare park. It is a haven for bird-watchers too, and anyone interested in nature. There is a small information centre here, so you can find out what to look out for on your walk. If you have young children, it is a wonderful place for them to let off steam, and (hopefully) tire them out.

On leaving Pennington Flash, you will pass through the Plank Lane Swing Bridge, and again be in the open countryside, with the canal flowing on an embankment, above the surrounding landscape. The land around here used to be a mining area but has now been transformed, the canal being raised because of subsidence caused by the mining.

Just beyond here is The Dover Lock Inn, on the canal side at Dover Bridge. Children are welcome until 9pm if dining, but no dogs are allowed.

Moving on, you will now see Scotsman's Flash on the left of the canal, and Pearson's Flash on the right, as you make your way to Wigan Junction, where you will bear left towards Wallgate. You can moor here if you wish, and seek out the Tourist Information Centre, where you can find out about going into Wigan, or maybe visit Wigan Pier, the subject of a book by George Orwell.

You are not far now from the mooring for tonight at Ranicar's Swing Bridge No. 44. En route to the stop, you will cruise through the outskirts of Wigan towards Crooke, where you may like to stop for sustenance at the Crooke Hall Inn, which is adjacent to the canal. There is a beer garden with a children's play area, and they serve traditional ales and food seven days a week.

Just a little way along the canal is your mooring for the night at Ranicar's Swing Bridge.
Today you have covered 20 miles and navigated 7 locks in just under 8½ hours.

Your destination today is Tarleton, where you will need to turn for the return journey.

So, leaving your mooring, you will next cruise through Appley Bridge, a canalside hamlet in West Lancashire, in the Douglas Valley. There is a local shop here and a post office, and it is a quaint hamlet if you just want to have a walk around. There is a pretty pub here called The Wheatsheaf, so if you want to eat before moving on, this would be a nice place to stop.

You will now approach Rufford Old Hall, which is just beyond Chapel Bridge No. 7.

Rufford Old Hall is a National Trust property which is a medieval half-timbered Manor house. There are gardens and tearooms here, and beautiful rooms furnished in period style. The Hall is beside the canal, but if you want to visit it, you would be advised to moor near bridge 8, walk into the village, then turn left at the main road. The entrance is a few hundred yards along the wall, on the left.

Also worth visiting while you are here, is St Mary the Virgin Church, an Italianate Victorian building with many monuments.

Leaving Rufford, the canal flows through flat, open countryside, which is very sparse and featureless, until bridge No. 10, when you reach a tiny village called Sollom, a chocolate-box village with quaint streets and houses.

On the other side of the canal you may see Bank Hall, a Jacobean mansion in Bretherton. It is a Grade II listed building and is being slowly restored by a group of volunteers. It is an imposing building which looks gothic in style.

Cruising on, you will reach Tarleton, your destination for tonght. You will need to turn here either tonight or in the morning, ready for the return journey.

You will probably be ready for a nice meal before settling for the night, so why not try The Cock and Bottle on Church Road. This is a popular village local in the heart of Tarleton, serving home-cooked food and traditional ales.

You will now be ready for a good night's sleep after cruising 15 miles and navigating 8 locks in just under 8½ hours.

Day 5
Day 6
Day 7
Day 8
Today you embark on your return journey, so things you missed on the way up, you may like to stop for on the way back. It is about 26 hours back to the marina, so cruise for about 8-9 hours per day if doing over 7 days