You can do this route from :
Nantwich Marina.

The Shropshire Union Canal is a charmingly rural and isolated waterway for much of its length. With stretches where there are no towns for miles, it is a great place to get close to nature.


The northern section is a wide waterway, following the gently rolling Cheshire landscape. The arrow-straight southern section has a character all of its own, which comes from being built in the twilight of the canal age.

Long embankments, cuttings and grand bridges were developments of the railway age, and allowed the canal to have fewer locks. The deep, moss-grown cuttings are atmospheric and full of wildlife, and you can often spot herons and kingfishers. 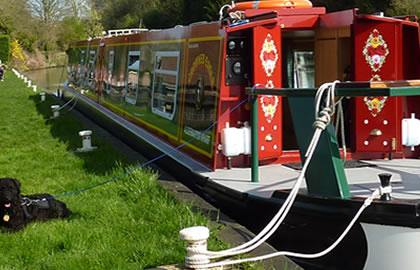 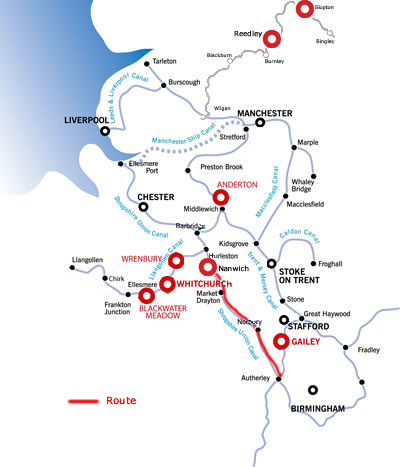 Nantwich Basin used to mark the end of the old Chester Canal, but now it is the home to the Nantwich Canal Centre, which incorporates a shop, café, boatyard and hire centre. Nantwich is a beautiful town whose centre is a short walk from the Basin and has the largest collection of historic buildings outside Chester within the county of Cheshire and offers a varied shopping experience including a vibrant market.


From the Mooring move south down the Shropshire Union Canal.
There is a small cast iron aqueduct and a long sweeping embankment flanked by housing.

The Hack Green Locks are 2 locks within walking distance of the Hack Green Nuclear Bunker which was a secret bunker reserved to protect the privileged in case of attack during the Cold War. Today it is open to the public and it has a substantial collection of military and Cold War memorabilia, including one of the largest collections of decommissioned nuclear weapons in the world. If you are planning a visit to Hack Green be sure to check opening times to avoid being disappointed.

Moor up just before Moss Hall Bridge to avoid the Audlem flight of locks , you can walk into Audlem which is off to your left, with pubs canalside and by bridge 78. Audlem village is a place to get supplies in, just a short walk from the Shroppie, with most shops available along with a tourist information and post office.

Have a good breakfast today as you will have 15 locks to do straight away!

The 15 Audlem Locks have a total rise of around 30 metres from the Cheshire Plain to the Shropshire heights and are the longest flight on the Shroppie.

This is an area that is popular with walkers, the towpaths are often busy with people taking strolls on nice days, and there is a gift shop to visit which is in an old mill.

After congratulating yourself on completing this flight you only have just over a mile until the 5 Adderley locks, but then you have a quiet 3 mile strectch until you reach Market Drayton.

Market Drayton, the home of Gingerbread, is a market town which holds a market every Wednesday. It is also a lively boating centre with many moorings to choose from and several boatyards. The centre of town is an easy walk from the canal and there are plenty of shops to purchase supplies from along with the market where you can pick up good local produce too. The town has some beautiful architecture from timber framed houses to a stunning 14th century sandstone church. On entering the town you pass over the pretty 40 Steps Aqueduct so called because of the 40 steps leading up from the road to the canal.

It is 5.5 hours to here but you have passed through 20 locks, so you have earned a rest!!

On leaving Market Drayton you climb the 5 Tyrley Locks , the landscape is very quiet and pleasant.

Woodseaves Cutting and the impressive High bridge is the next place on your journey. This is a magical place, particularly in Spring when the deep cutting echoes with birdsong, as it is now a Site of Special Scientific Interest because its geological importance.

The Wharf tavern at bridge 55 was once a coal wharf and warehouse, but is now a popular canal venue.

No villages are close by this stretch of the canal, at the end of the Shebdon Embankment is the Knighton Cadbury's factory. This was opened in 1911 and they had a fleet of narrowboats to transport their goods to the Bournville site. The last load to be carried by boat was in 1961 by “Charlie Chocolate” Atkins in his boat Mendip which has recently been restored and can be seen at the Ellesmere Port museum.
At the end of the great Shebdon Embankment is an aqueduct ,

There is another cutting- Grub street, that is soon reached with an unusual double arched bridge containing what must be the smallest telegraph pole in the country!

The Norbury Junction is where the Newport Branch used to be, but it is now closed , but there is a Canalside cafe with picnic tables and a pub, and it is a popular and pretty setting.

Shelmore Embankment is 1 mile long and caused much grief and expense to the Birmingham and Liverpool Canal company and to Thomas Telford, the engineer in particular. It took 5.5 years during which time millions of cubic feet of earth had to be removed, and it collapsed many times! This was the last section of the canal to be completed and the reason for Telford to never see his final waterway opened. Troubled from the start this section had to be repeatedly repaired. Today it is covered in mature trees whose roots help with stability and there are also flood gates at either end of the embankment in case of a breach.

Gnosall village is passed to the right, which is convenient for stocking up on supplies or stopping for a pint and a bite to eat, and you can moor here for the night as it is 6 hours to here

Day 4
Once through Cowley Tunnel you are into Cowley cutting that is deep, narrow and wooded. This section was originally intended to be a part of the Cowley Tunnel which takes you into Gnosall, but the ground was unstable so they opened this section out and made it the cutting it is today.

You are now into beautiful countryside passing through deep wooded cuttings and embankments that give views for miles. During this section you will only pass though a handful of hamlets. It is so rural and remote that you can get lost in the peace, disturbed only by a nosy herd of cows as you cruise by.

At Wheaton Aston you will find a waterside garage that offers some useful facilities for boaters and a canalside pub. Wheaton Aston also has a few basic supplies.

The Wheaton Aston lock is unique by way of being the only singular lock on the canal route as the other locks are bunched together in "flights". This made for quicker working by the boat people because locks could be easily prepared in advance of the boats.

You will see the Belvide Reservoir which supplies water for the canal over to your right. A very short distance from there is a cast iron aqueduct, the Stretton Aqueduct, which was built in 1832. It is used to cross the A5 Watling Street.

Chillington Hall, close to the village of Brewood (pronounced brood), is home to the “Fancy bridge” named by the workers who built the Shroppie. Powerful landowners demanded grand and ornamental bridges where the canal crossed their properties and this is a fine example of such work.

A tree lined avenue crosses the canal here leading up to Chillington Hall which is now a venue for Weddings. Just a short distance upstream from Chillington Hall is Brewood and you will find shops, pubs and restaurants close at hand and there is also a boatyard all of which should meet any of your requirements.

Autherley Junction is reached and this is the end of your journey, as this is where the Shroppie meets the Staffs & Worcs canal.

Autherley Junction is known to the working boatmen as “Cut End” due to it being where the Shroppie met the much older Staffordshire and Worcestershire Canal, Autherley Junction was once a busy place with workshops, a toll office and stables, today Autherley has a boatyard with a hire fleet and a club house.

Many of the original buildings still exist and it is home to bridge #1 on the Shroppie which is an original design by Thomas Telford. There is also the original shallow stop lock where Sam Lomas used to control boat movement and issue toll tickets. The lock has a drop of 1 inch, meaning no drop at all, so was purely used for Lomas's financial motives. Autherley is very attractive and full of canal history and it is worth giving yourself some time to look around!

The lock has a drop of 1 inch, meaning no drop at all, so was purely used for Lomas's financial motives.

Go through the lock turn the boat around and moor up for the night.

Just to the north is Blaydon Road bridge bridge 66 and you can walk north west up the road to the Pendulum pub.

It is just under 20 hours back to the marina, so cruise for 7 hours each day or just under.