BATH AND RETURN FROM HILPERTON

If you moor at the top of the Bath locks you can walk into the city from there. 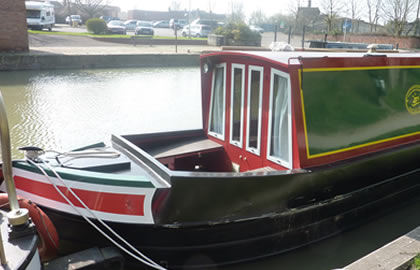 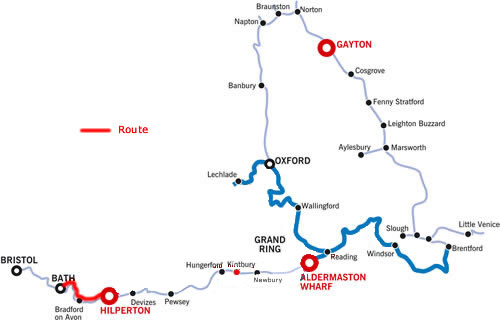 If you have all your provisions you can begin your journey. If not if you walk back along the towpath
to Hilperton Road bridge 166, there is a convenient stores here.

Day 2
The River Avon rushes along beside the canal, Avoncliff is a nice place to stop with its tearoom and pub overlooking the river. Further along, if you moor at Limpley Stoke Bridge, walk down the the Railway bridge & turn left you will find a lovely 400 year old Pub called the Hop Pole, which was originally a monks wine lodge.

Bathampton & Bathwick are on the outskirts of Bath, if you want to avoid the Bath Locks the best place to moor up for Bath is at the top of the Bath Lock, Mooring here puts you in line with the rooftops of the city and an enjoyable walk away from the city centre.
Cruising into Bath is like gliding into Regency Britain.
(Cruising time 3.5 hours)

(Cruising time an extra 2 hours, if passing through all 6 Bath locks).

Day 3
You can spend the morning exploring Bath here is so much to see.

Bath was first developed as a spa town by the Romans because if its natural warm springs.
There are extensive Roman buildings to be seen, the Roman Baths are in the heart of the city which is a World heritage Site.
The fantastic sweeping architecture of the Royal Crescent built around 1770 and the Circus which dates from 1760 have to be seen. In the Royal Crescent is the Jane Austen centre- a tribute to Bath's famous resident.

The Thermae Bath Spa the only place in the UK where you can bathe in natural warm waters.
Bath Abbey in also in the centre of the city, it was established in 1499, and is famous for its fan vaulted ceiling, also it has interesting memorials to the vast range of people who in times gone by have died in Bath.

In the afternoon you can start cruising back to Bradford on Avon & moor there for the night.
3.5 hours cruising from top of Bath Lock, or 5.5 hours from bottom Bath flight of locks.

Day 4
Return to the marina to vacate by 9.30am
I hours cruising from Bradford on Avon to Hilperton