Lying on the River Dee close to the border with Wales Chester was founded as a 'castrum' or Roman fort in the year 79. After the Romans left in the 5th century the Saxons fortified the town against the Danes and gave Chester its name. It was one of the last towns in England to fall to the Normans in the Norman conquest of England.

William the Conqueror ordered the construction of a castle and the remains of Chester Castle still stand on the banks of The River Dee just a stones-throw from the border with Wales.

The Shropshire Union affectionately known as 'The Shroppie' runs through stunning countryside for 66 miles across valleys and through hills. In contrast to the winding contours of early canals 'The Shroppie' is Arrow-straight for much of its length and runs from the North-West to Wolverhampton and the Midlands.

Step off the pages of history into The Newstead Roman Gallery the gallery tells the story of the Romans in Chester including the Roman legion, its fortress and what everyday life would have been like in Roman Chester. Tour Chester with a real Roman and enjoy a light-hearted journey through the Roman heritage.

Managed by English Heritage and a Grade 1 listed building the Chester Amphitheatre is the largest, so far, uncovered in Britain. Dating from the first century the amphitheatre would have been primarily used for military training and drill but was also used for cock fighting, bull baiting combat sports and gladiatorial.

Discover 2000 years of Chester life in the Grosvenor Museum see the impressive collection of Roman tombstones and displays depicting Roman Chester - look out for the Roman soldiers on the way. Discover the world of the famous naturalist Charles Kingsley and explore 'hands-on' the geology and natural history of the area.

Chester Zoo is home to 7000 animals including some of the most endangered species on the planet.

Discover 1,000 of shops behind the facades of the black and white buildings find high street brands to designer boutiques. Shop in Chester's Rows where 21st century stores thrive in a Medieval setting. Take home some Cheshire cheese which is one of the oldest recorded cheeses in British history and is even referred to in the Domesday Book. 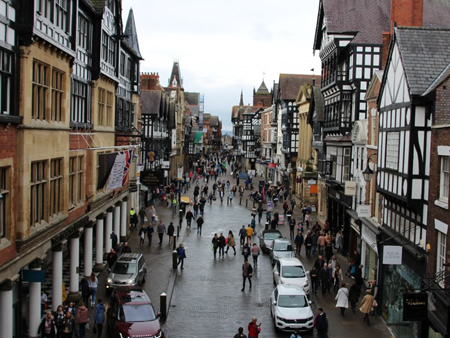