Both canals were built to carry salt from the salt mines in Droitwich. They have been the subject of a restoration plan since 1973 and have recently been restored and are now fully opened.

THINGS OF INTEREST ON ROUTE
Vine Park - Set between the Droitwich Canal and the River Salwarpe this pretty park is on the site of the former brine works. Look out for the mosaics which where created by local school children to commemorate the salt workings.

Hanbury Hall - Built in 1701 by Thomas Vernon this beautiful William and Mary style house is now owned by The National Trust. Stroll around the stunning gardens which include a parterre, fruit garden, grove, orangery, orchard and bowling green.

River Salwarpe - A tributary of the River Severn and runs paralleled to the Droitwich Barge Canal for much of its length. The river is briefly navigable at Hawford to give access to a marina then again for a few metres in Droitwich Vines Park where it forms the connection between the Barge and Junction canals.

Hawford Dovecote - Owned by the National Trust The Hawford Dovecote has survived virtually unaltered since the late 16th century and retains many of its nesting boxes. The fascinating sixteenth Century has warped and twisted over the years giving it an interesting crooked shape. 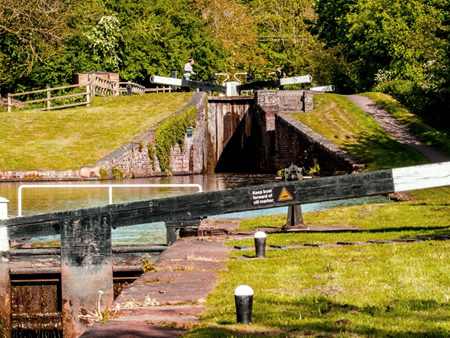