ELLESMERE AND RETURN FROM WRENBURY

You can do this route from :
Wrenbury Marina.

This cruise takes you pass the famous Meres- or lakes made durung the Ice Age to the 18th century Market town of Ellesmere.
A very pleasant rural cruise with beautiful scenery, and through the small staircase locks at Grindley Brook. 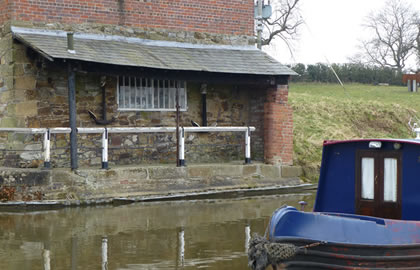 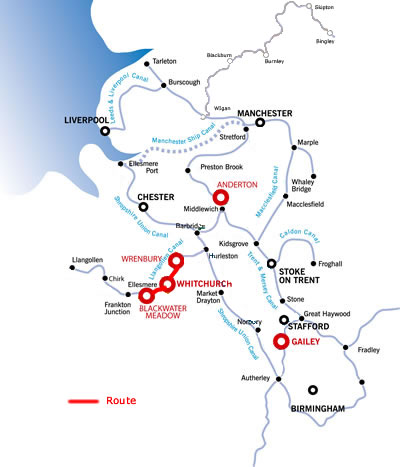 Cruising westwards towards Llangollen, on the first day you probably will not get very far, as by the time you've checked in and stashed all your belongings and provisions, watched the training video and had your training, time will be passing.

If you fancy a bit of cruising before dark, you will just have time to get used to the feel of your boat, and enjoy the beautiful countryside and get stuck into a couple of locks, before you moor up after a few miles and make yourself a cup of tea and relax after the stress and strain of the days car journey.

Cruise to Marbury and you can walk the ½ mile south into the enchanting village from Bridge 23, there is a pub here.

Passing through the lovely countryside, continue on through 2 locks until you get to Willeymoor Lock where you can moor up for the night outside the Willeymoor Lock tavern.

It is 2.5 hours cruising to here

After Willeymoor Lock, there is Poveys lock to negotiate just a little bit further on.


The open quiet countryside continues but as you approach Grindley Brook, prepare your crew as there are 6 locks ahead, including 3 in the form of a staircase. At the end of a straight stretch a massive railway embankment precedes a sharp bend, around which is the start of the locks. Boats should remain below the railway embankment, and between April to October 8.30am to 18.30 pm obtain the advice of the friendly lock-keeper before starting to negotiate the locks, as he will know which boats are queuing to go up and down.

The Horse & Jockey Pub is near the bottom lock, there is also Lockside Stores where you can obtain provisions and the cafe there has internet access & is open April-October for tea, coffee & snacks.


The canal now approaches Whitchurch, and if you have time it is worth exploring this fine old Roman town which has some beautiful old houses of all periods in its centre. The streets are narrow & it has a variety of shops and pubs, moor up along the Whitchurch Arm, after the lift bridge turn a sharp left and cruise to the end, it is about 15 minutes walk into the town.

It is 4 hours from Marbury to Whitchurch.


From Whitchurch the canal once again goes through the open countryside passing no villages for miles.

Continue your cruise and you will shortly reach Whixall Moss, a raised bog with rare insect and plant life, but there might be mosquitoes as well! The bog was also formed during the Ice Age. There are walks & cycle routes over Whixall Moss, see leaflets near bridges 44 & 45.

There is a lovely lift bridge at bridge 45.

The canal branches away to your left but Prees Branch only leads to a nature reserve & a marina, so keep right.


The canal passes into England and then into Wales, going backwards & forwards past a remote and unpopulated area. At bridge 48 is the small village of Bettisfield, there is a stores here & off-licence.


Soon the open countryside gives way to more hilly wooded landscape as you start to pass through the Meres that make this area famously called the mini Lake District.

Cole Mere is the first on your left, then Blake Mere further on your right. The largest Mere is by Ellesmere itself, you can walk to it from Bridge 57 just after the short Ellesmere Tunnel. The Meres were carved out during the Ice Age.


You will soon be approaching Ellesmere, and a fine old warehouse and small canalside crane, and old canal company offices, testify to the canal trading that used to be carried out from here.

Ellesmere is a busy 18th century market town with delightful pubs and restaurants, also a variety of shops and a Co-op. Moor up the end of the Ellesmere Arm a canal branch to your right .

Cruise the 5.5 hours back to Whitchurch & moor up along the Whitchurch Branch arm.

Cruise the 5.5 hours back to Wrenbury marina from Whitchurch.