FOTHERINGHAY AND PETERBOROUGH THROUGH THE FENS FROM MARCH

You can do this route from :
Fox's Marina.

Fotheringhay is an attractive little village with a lot of history.

The first castle here was built in 1100 and the second in the 14th century. In 1452 Richard III was born here and in 1587 Mary Queen of Scots was beheaded in the castle, an event that proved to be the castle’s ruin as when her son, James I, came to the throne in 1603 he had it demolished and today only a few stones and the castle mound survive.

The Collegiate Church at Fotheringhay dates back to the early 15th century and is an imposing building even today following its truncation by the removal of the Choir in the reign of Henry VIII. 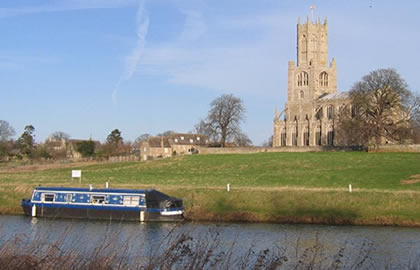 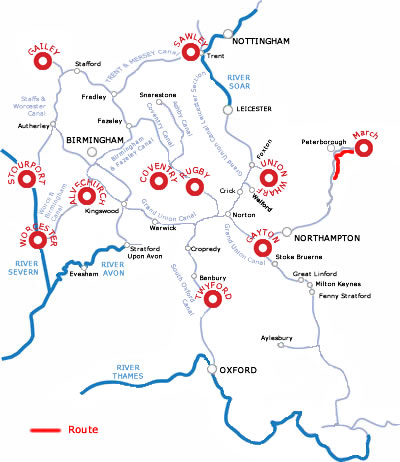 Floods Ferry and the Greenwich Meridian

Turning right from our marina along the Old River Nene this route passes Floods Ferry and crosses the Greenwich Meridian . Beyond this is Floods Ferry Junction where the Old Nene forks left and our route turns right down Whittlesey Dyke.

After three miles cruising you approach Angle Corner where to the left Bevill’s Leam joins our route and opposite on the right is the entrance to the Twenty Foot River. Continuing straight on you find the dyke narrows as the outskirts of Whittlesey are approached. Ashline Lock (a boater operated manual lock) marks your arrival at this historic market town and above the lock there are visitor moorings next to the Leisure Centre.

Soon after leaving the Whittlesey moorings there is a bridge on a 90° bend which even an experienced boater must treat with respect. You then pass two of the many pubs in the town before heading through some more open country and travelling beside a deep brick pit. Brick making has long been an industry of the town and of much of the area east of Peterborough although most of the clay pits are now worked out. On the approach to Peterborough the cathedral can be seen clearly visible across the flat fields that lead to Stanground Lock.

A short branch of the River Nene leads from the lock, with Stanground Village on the left and a nature reserve on the right, before we go under the railway bridge that takes us out onto the wide waters of the Nene. Turn left here and you will find visitor moorings along the length of the park which are convenient for the city centre.

As you cruise up river from the centre of Peterborough you will see on the right a series of open spaces and wild areas that form part of the huge Nene Park that occupies some 500 acres of meadows, lakes and woods and runs for around six miles alongside the River Nene. You pass the entrance to the channel that leads to the rowing lake then the sculpture park can be seen.

Two miles up river from Peterborough Bridge is Orton Lock the first of a series of Guillotine locks that are a feature of the Nene. The Guillotine gate is electrically operated by boaters but the top mitre doors (gates) must be manually operated. Above the lock are the moorings of the Peterborough Yacht Club and then you come to the entrance to Ferry Meadows Country Park which is on the left just before the footbridge that crosses the River Nene. A short connecting channel will take you into Orton Lake, one of the many lakes in the park. Head towards the left-hand side of the lake and you will see the pontoons provided for visitor moorings.

Up the river from the entrance to Orton Lake your journey continues beside the Ferry Meadows Country Park where you can see more lakes, including Gunwade Lake, which is used for sailing. After passing under the Nene Valley Railway bridge you arrive at Alwalton Lock.

You cruise through verdant countryside and some very attractive villages. By Water Newton Lock the millstream still gushes beneath the old mill buildings and a popular footpath for walkers crosses the lock. From here it is 3¾ miles to the next lock at Wansford.Before reaching the lock the Nene Valley Railway crosses the river twice more, once close to Wansford Station and the railways rolling stock sidings. You also pass Stibbington Boatyard and pass under the A1 dual carriageway just before Wansford village and the old Wansford Bridge. It is amazing to think that up until 1929 this medieval structure carried all the traffic on the country’s main route between London and the North. Beside the bridge is the old Haycock Inn and inside is displayed the story of Barnaby, his haycock and Wansford-in-England.

Yarwell Lock, next to Yarwell Mill and its camping and caravan site, follows before we pass the village of Nassington, set back from the main channel of the river. After yet another old mill beside Elton Lock you travel beside the woods before coming to your final lock at Warmington.

Fotheringhay is an attractive little village with a lot of history. The first castle here was built in 1100 and the second in the 14th century. In 1452 Richard III was born here and in 1587 Mary Queen of Scots was beheaded in the castle, an event that proved to be the castle’s ruin as when her son, James I, came to the throne in 1603 he had it demolished and today only a few stones and the castle mound survive. The Collegiate Church at Fotheringhay dates back to the early 15th century and is an imposing building even today following its truncation by the removal of the Choir in the reign of Henry VIII.

There are moorings above the bridge close to the village pub, The Falcon, which has a good restaurant. Alternatively there are moorings below the bridge next to the castle mound. Both sets of moorings are provided by a local farmer and there is a fee payable (see notice boards on the moorings). Fotheringhay is a delightful place that makes a fitting end to your cruise but there are still over forty miles more of Nene cruising so if you have the time the Nene still has a lot of boating to offer.