Glasgow grew from a small rural settlement on the River Clyde to become one of the largest seaports in the United Kingdom. During the Industrial Revolution the city and the surrounding regions became known the world over as a centre for heavy engineering, most notably in shipbuilding and marine engineering.

The breathtaking Science Mall is a stunning crescent overlooking the River Clyde and the three floors are packed with hundreds of interactive exhibits. The Centre hosts a variety of workshops where you can launch your own rocket or make friends with a Madagascan Hissing Cockroach. Be sure to visit the Science Show Theatre and the Planetarium.
With free admission The Transport Museum depicts the history of transport on road, rail and sea over the centuries. The museum houses steam locomotives, electric and horse drawn trams, buses and cars. The upper level tells the history of the bicycle and motor cycle and also located on this floor is the Clyde Room where the original shipyard models of the Clyde's proud past are exhibited.
The Burrell Collection houses a unique collection of objects gifted to the city of Glasgow by Sir William Burrell. There are over 8,000 objects on display including exhibits from the late medieval and early Renaissance. It also contains examples of Chinese and Islamic art, French Paintings and Ancient Civilisations and works by major artists including Rodin, Degas and Cézanne.

The Gallery of Modern Art is located in the heart of the city centre and shares a building with the City Central library. This iconic building was once the centre for for business and commercial exchange where information and goods were traded. The modern art collections and displays are constantly changing and the centre runs talks and workshops.
Glasgow Cathedral is built on the site where St Kentigern the first bishop within the ancient British kingdom of Strathclyde was thought to have been buried in AD 612. The present cathedral was built during the 13th to 15th centuries and is the only medieval cathedral on the Scottish mainland to have survived the 1560 Reformation virtually complete. During the summer months you can take a tour of the Cathedral with one of the volunteer guides.

The People’s Palace is a social history museum which gives visitors a chance to see the story of the people of Glasgow from 1750 to the present day. Right along side is the Winter Gardens, an elegant Victorian glasshouse where you can relax among the tropical plants and enjoy the café. Marvel at The Doulton Fountain, the largest terracotta fountain in the world, as well as the best surviving example of its kind. The fountain has been beautifully restored and relocated to the front of the People’s Palace.

Throughout the city of Glasgow you will see many examples of the work of Charles Rennie Mackintosh. Mackintosh was born in Glasgow in 1868 and went on to become a world-renowned artist, architect and designer. Alongside a close group of friends Mackintosh brought 'The Glasgow Style' to many of the city's buildings. During the school summer holidays you can take a guided tour of the city and see many examples of his work in the fine architecture.


Glasgow is the second largest shopping centre in the UK and the city centre has three pedestrianised main thoroughfares Sauchiehall Street, Argyle Street and Buchanan Street. Along these main streets are shopping malls such as the Sauchiehall Street Centre, the Buchanan Galleries, the stylish and hip Princes Square, the St Enoch Centre, and the bright and sunny atrium's of the Argyle Arcade. At the city’s West End, you will also find smaller boutiques and specialised shops, including an interesting array of antique and craft shops, designer homeware boutiques, clothing shops and vintage record stores. When you are all shopped out the dinning out in the city is an experience like no other.

Glasgow is the envy of many European cities for its amazing choices of restaurants and cafés. During the summer months, enjoy alfresco dining in the city centre's Royal Exchange Square or Buchanan Street or on the cobbled streets of the West End and Merchant City 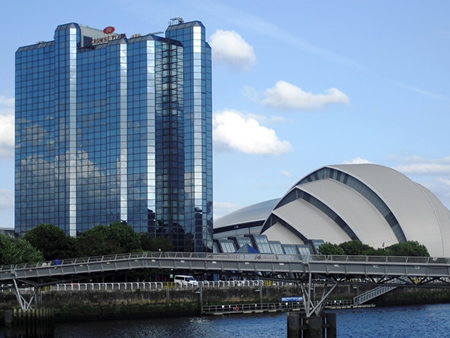