MIDDLEWICH AND RETURN FROM BLACKWATER

A very rural and tranquil cruise through some lovely scenery

A lovely cruise through the area around Ellesmere known as the 'mini Lake District', as you pass some of the Mere's at Ellesmere. The largest mere is to the west of the tunnel as you approach it. Immediately after the tunnel is Blake Mere, then Cole Mere to the east. These Mere's were formed during the Ice Age.


Through the Grindley Brook small flight of 3 staircase locks to the salt producing town of Middlewich.

Every year, for three days in June, there is a folk and boat festival, known as the Middlwich FAB Festival, which is well worth going there for. There are artists, music, food, traders of all kinds 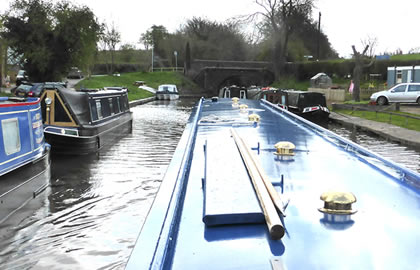 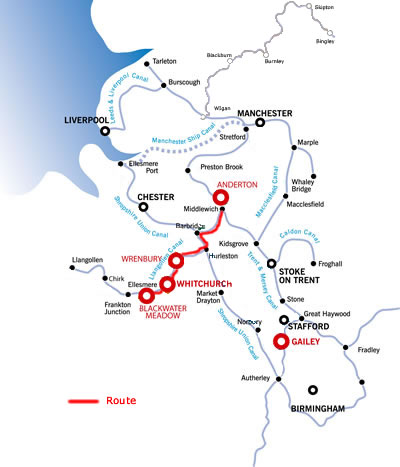 As you leave the marina on the Llangollen Canal, you will first head towards Ellesmere Tunnel, which is only 87 yards long.

Heading towards the tunnel, you will see why Ellesmere is known as the 'mini Lake District', as you pass some of the Mere's at Ellesmere. The largest mere is to the west of the tunnel as you approach it. Immediately after the tunnel is Blake Mere, then Cole Mere to the east. These Mere's were formed during the Ice Age.

You will now be cruising through a remote and underpopulated area, with no sign of life for several miles, but there are some pretty bridges until you reach Bettisfield. This is a tiny village with only about 150 houses. It is near to Whixall Moss, a local peat bog nature reserve, which in 1996 was declared a National Nature Reserve because of its importance to wildlife. There are no shops or a pub in the village.
You have cruised 4 miles in 2 hours.

At Bridge 46 there is a sharp right arm called Prees Branch.

The canal now gently wends its way towards Whitchurch through a series of more lift bridges, peaceful countryside, until you reach the entrance to the Whitchurch Arm, on your right, where you can moor up and walk about ½ mile if you want to have a look around Whitchurch.

From its elevated position in the centre of Whitchurch, St Alkmund's Church is well worth visiting. It was opened in 1713, and in 1951 it was designated a Grade I listed building.

In the town, you will find lots of lovely pubs, shops and cafe's. Lots of the buildings are of Tudor style, giving this pretty market town a rather quaint feel to it.

The Black Bear is opposite St Alkmund's, so an ideal place to sit and people watch with a nice cool drink, and perhaps a meal if you've not yet eaten.

Once you leave Whitchurch, you will head towards the Grindley Brook Locks. These three staircase locks are closely followed by three more locks, where from April – October there is a friendly lock-keeper. Nearby, is a cafe serving drinks and snacks, and Lockside Stores, selling local produce.

Moving on, you will encounter the occasional lock, the second one having a pub ideally situated right next to it – The Willeymoor Tavern, which was formerly the lock-keepers cottage. Inside, are some lovely canal paintings.

Today you have cruised 10 miles, and navigated 8 locks, in just under 6.5 hours.

After a wide arc to the left, you will approach Marbury, right near Marbury Lock, and further again is Wrenbury, which you can access from Bridge 19 or 20, about 3/4 of a mile away.
Wrenbury is another pretty village with Tudor style cottages clustered around the village green, one of which – Elm House – is a Grade II listed cottage, dating from C17th, as are some of the others in the village, including the village school.

Parts of Wrenbury Hall date from C17th, and formerly belonged to the Starkey family, who were prominent landowners until 1920.

There are two pubs in the village – The Cotton Arms and The Dusty Miller.
Annually, the first weekend in July is Wrenbury's 'Scarecrow Trail', part of the Summer Fayre celebrations. It is well worth a visit if you are nearby at this time.

Leaving here, you will soon come across a lift bridge, which if down, you will need to let a crew member off to raise it using the windlass, and then there are the three locks at Baddley.
Continue along the canal and through the Swanley Locks, until you reach Hurleston Locks. When you reach Hurleston Bottom Lock No. 1, you can safely moor for the night.

You have covered a distance of 9 miles, navigated 10 locks, all in just under 6½ hours.

Leaving your mooring, bear left off of Hurleston Junction until you reach the junction at Barbridge, where you will need to bear right onto the Shropshire Union Canal (Middlewich Branch).

Before you turn onto the Shropshire Union Canal, you might like to moor up at Barbridge, and perhaps have a drink or snack at The Olde Barbridge Inn, in an idyllic spot right alongside the canal and Barbridge Marina.

Moving on, this stretch of canal is beautifully picturesque, with some very tranquil moorings. The countryside is remote and pretty as you cruise through Cholmondeston. If you have time, you can moor up and take public transport to visit Beeston Castle. For prices and opening times, visit their website.
You will now cruise towards Church Minshull, through woods and farmland. This beautiful little village with the church at its centre, is home to Yankee Candles, where you can buy gifts, glass and flowers. It is well worth visiting the village, even if only for its quaintness.

The canal now wends its way towards Middlwich, where you should turn at Middlewich Junction and moor at Hughes Bridge No. 25 for the night, and also to visit Middlwich.

Middlewich has, since Roman times, been a major site for salt production, which has remained its principal industry. There are four supermarkets here, so a good time to stock up on provisions for the return journey.

Every year, for three days in June, there is a folk and boat festival, known as the Middlwich FAB Festival, which is well worth going there for. There are artists, music, food, traders of all kinds, so if you are interested, visit their website for all the details.

Today you have navigated 7 locks in 13 miles in just under 6.5 hours.

You will now retrace your journey back to Blackwater Meadow Marina.