Standing at the confluence of the River Severn and the River Avon in the Gloucestershire countryside Tewkesbury is named after the Saxon hermit Theoc who is thought to have founded an hermitage here in the seventh century. For centuries Tewkesbury had been the centre for flour milling and the Healings Mill was a typical Victorian factory built in 1869 by Samuel Healing. The grain was transported by barge from Avonmouth and Sharpness and travelled up the River Severn and into the River Avon. Until recently flour was still milled at a more modern mill a short way upriver on the site of the quays.

Tewkesbury is famous for two bridges the impressive cast iron Mythe Bridge designed by Thomas which spans the River Severn and the King John's Bridge over the Avon which was commissioned by King John in the late 12th century as part of improvements to the main road from Gloucester to Worcester.

With its fine half- timbered buildings Tewkesbury has a virtually perfect medieval street plan with numerous timber-framed houses and many narrow alleys Walk the alleyways of the town where the two sides of each alley nearly touch there about 30 alleyways remaining today and these add to the unique charm of the town.

Built in the 12th century to house Benedictine monks the Norman Abbey was near completion when consecrated in 1121. The Abbey has a fine Norman tower which dominates the town's skyline.

Tewkesbury Abbey is larger than many cathedrals and features exquisitely sculptured tombs, chantry chapels and a 17thC Milton Organ.

In the Abbey fields in 1471 the battle of Tewkesbury took place which was to prove a decisive encounter which ended the second phase of the Wars of the Roses. During this battle, The House of York defeated house of Lancaster. Killed at the Battle of Tewkesbury a brass plate on the floor marks the grave of Edward, prince of Wales, the son of Henry VI who was the only price of Wales ever to die in battle.

Out of the Hat is a brand new visitor and heritage situated in a 15th century building which has been restored and renovated. Contemplate what life would have been like in 17th century Tewkesbury and explore the town's fascinating history. Take a tour around the home of Bartholomew Read a glove maker and resident in the building during the 17th century.

Browse in the many speciality and antique shops or enjoy the bustling atmosphere of the market days. There are numerous inns, restaurants and tea shops, many housed in buildings with fascinating architecture. Stop for a pint at The Black Bear dating from 1308 and reputed to be Gloucestershire's oldest public house. 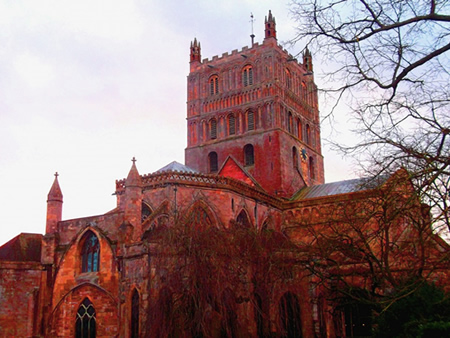