BANBURY AND RETURN FROM GAYTON

The town of Banbury is on the edge of the Oxfordshire Cotswolds and has been a busy market town for centuries.

The famous Banbury Cross situated at a cross-roads on the broad Horsefair, is a mid-19th century replacement, erected to commemorate a royal wedding in 1858. The original medieval cross was destroyed by the Puritans in the early 17th century. The well-known nursery rhyme refers to the cross - ' Ride a cock horse to Banbury Cross to see a finer lady on a white horse'. It is thought this rhyme referred to a visit by Queen Elizabeth I.

Banbury Cakes, a special fruit and pastry cake, are still produced. At one time they were being sent as far afield as Australia, India and America. 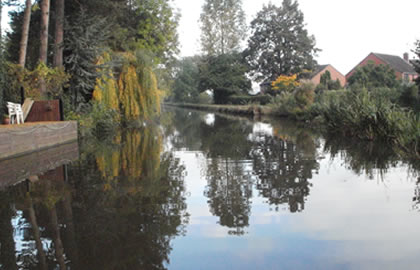 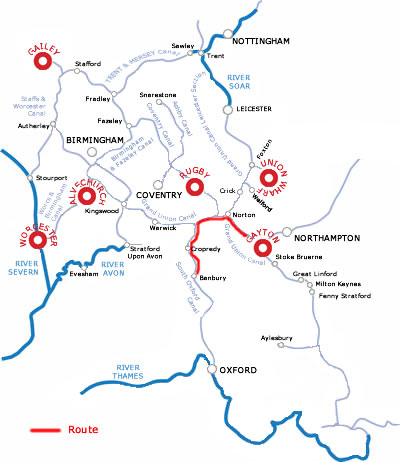 Head back down the Northampton Arm of the Grand Union to Gayton Junction.(Turn right out of the marina).

At Gayton Junction turn right down the Grand Union Canal. Soon you will pass the village of Bugbrooke, and the Wharf Inn is by Bridge 36, or there is a couple of village pubs if you walk into the village.

The canal continues through open landscape until you begin the climb up to the Norton Junction through a series of 7 locks called the Buckby locks.

The New Inn is canalside at Buckby Top Lock, with canalside seating and moorings.

At Norton Junction you can then go down the Grand Union west towards Braunston.

From Norton Junction to Braunston the canal runs westward through hills and wooded country, then into a wooded cutting whichs leads to Braunston Tunnel.

Off to the north on your right you will pass the small village of Welton on a hill. At Bridge 6 ¾ mile from the Canal you can find a 400 yr old pub – The White Horse Inn.

It is 6 hours cruising from Weedon to Braunston.

At Braunston Turn turn left at the junction, the canal now passes open countryside with a backdrop of hills, there are no locks or villages and you continue on until you reach Napton Junction. You will be travelling north at this junction, but if you want a nice pub to stop at for the night, it is worth continuing left down the Oxford canal to bridge 111, as the haunted pub The Bridge at Napton is by the Bridge. Best access to the hilltop village is by Bridge 110, the village is scattered all over the hill, but the pubs and shops are at the bottom.
It is 7 hours cruising from Weedon to Napton

The Oxford canal continues a very twisting path through countryside with occasional villages dotted around.

After leaving Napton, head south along the Canal, there is a useful shop by bridge 113.
Cruise to Marston Doles bridge 119 just south of Napton, although there are no pubs or shops here, there is a water point.

It is 7 hours cruising to here.

Cropedy itself is soon reached, the whole village is close to the canal, and is the home of the Annual Cropedy Folk festival in August. There are a couple of pubs in the village, and nearby was fought the Battle of Cropedy in 1644, where the Royalists defeated the Roundheads and thus protected Oxford.

You cruise past Cropedy and then about another 2 hours further on is Banbury.

Banbury was originally a wool town, but is famous because of the Nursery rhyme although the original cross was pulled down by Cromwell in 1646 there is a Victorian replica.
The Mill Arts centre has plays theatre, dance & music. At Tooleys Boatyard you can have a guided tour and see boats being built and restored, it also has a working forge and a gift shop and chandlery.

It is 7 hours cruise to here