KIDDERMINSTER AND RETURN FROM WORCESTER

Cruise up the River Severn past the imposing Worcester cathedral to Stourport on Severn full of moored boats in its Canal basins to one of the prettiest canals in England- the Staffordshire & Worcestershire Canal to Kidderminster . 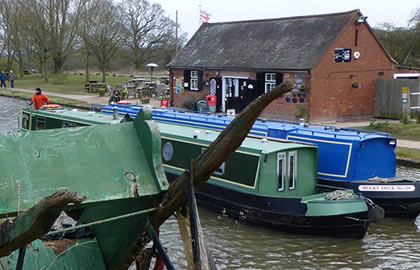 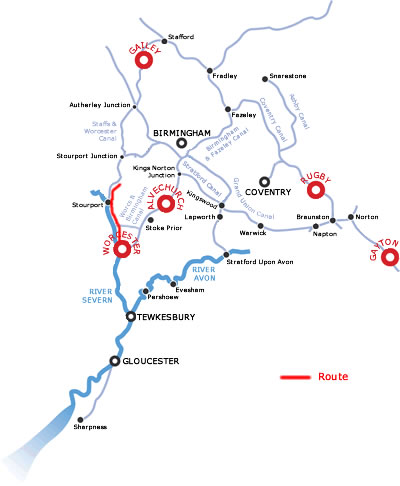 Cruise up the River Severn past the imposing Worcester cathedral to Stourport on Severn full of moored boats in its Canal basins to one of the prettiest canals in England- the Staffordshire & Worcestershire Canal to Kidderminster .

Turn right out of Lowesmoor wharf down the Birmingham & Worcester canal & soon you will encounter 2 locks, one called Blockhouse lock, followed by Sidbury lock. which will get you into the swing of things. It takes about an hour to get to Diglis basin, and if time is passing it is best to stop there for the night, and then you will have time to explore the city of Worcester. There is a water point just above the Diglis lock.

The marina is a short walk from the City centre, where you can explore the lovely cathedral dating from 1074. There is a wealth of stained glass and monuments to see including the tomb of King John. Also, a good place to visit is the Museum of Worcester Porcelain, which not surprisingly has the largest collection of Worcester Porcelain in the world. The Guildhall in the High street was built in 1721 and has a fantastic elaborate facade with statues of Charles I and II and Queen Anne.
In Friar Street is Greyfriars, dating from 1480, this was one part of a Franciscan priory and is one of the finest half-timbered houses in the country. Charles II escaped from this house after the Battle of Worcester in the civil war in 1651. In the George Marshall Medical Museum, you can meet the past heroes of medicine. Regular bus service from Crowngate Bus station.

Close to Sidbury lock is the Commandery Civil war Centre, a museum devoted entirely to the story of the Civil War. The museum dates from the reign of Henry 8th and served as Charles 11's HQ before the Battle of Worcester in 1651.

From Diglis basin you enter the Diglis locks- 2 deep locks which take you out onto the River Severn. The locks are under the supervision of the lock-keeper, who should tell you whether it is alright to proceed onto the River Severn but to make sure look out for the red, amber and green water level gauge to see if the Severn is in flood or not.

After coming out of the last lock onto the Severn, it is best to head towards the far bank heading south(in the opposite direction to which you will be headed) and then turn the boat to pick up your crew from the pontoon near the lock. So you do a half circle anti-clockwise, the river is very wide so it is easy to do.

Heading upstream the River passes the imposing cathedral and then the fine five arched bridge. The famous racecourse is on your right, and there are moorings here, also a water point.

The River winds through pleasant countryside to Bevere lock, but just before here is the Camp House inn pub on your left, with moorings. If you moor on the River leave your rope loose because it is tidal.

A mile beyond Bevere the river swings right, and soon you will see the entrance lock at the start of the Droitwich Barge Canal. You do not turn off the River Severn however.

The River winds its way through the picturesque Worcestershire countryside, you leave the River Severn at Stourport on Severn & join the Staffordshire & Worcestershire Canal.

This canal is one of the prettiest and most interesting waterways in England. The canal basins at Stourport are full of pretty moored boats, there are 2 entrances to the basins from the Severn one through broad locks, and the second one through narrow locks which is the one you should take.
The locks are open 24 hrs and form a staircase, the lock-keeper is usually around in case of difficulties. You should proceed to the eastern corner of the upper basins to join the Staffs & Worcs canal. There is a useful tea room & craft shop by the lock and temporary moorings.
BY bridge 5a where there are shops
Moor here for the night it is 6 hours to here.

You soon leave Stourport behind and approach Kidderminster with its smart new developments.
Cruise up through Kidderminster Lock 11 and turn around and If you have time take a look at Wolverley, which is north-west of bridge 20 (there is a turning point just beyond bridge 21, or after bridge 18 if you do not want to stop at Wolverley). This is a fascinating village with a church standing on a sandstone rock so steep that it has to be approached by a zigzag path. many of the houses close by are partly carved from the rock, their dark back rooms actually caves.

In Kidderminster there are good moorings at Weavers Wharf, with supermarkets & cafes nearby.
Moor between bridges 15-16 as there is good access to the town from here.

It is 2 hours cruising to here

If time allows take a train ride on the Steam Railway. The Severn Valley Railway is a full-size standard-gauge railway line running regular steam-hauled passenger trains for the benefit of visitors and enthusiasts alike between Kidderminster in Worcestershire and Bridgnorth in Shropshire, a distance of 16 miles. The train journey is full of interest, for the route follows closely the meandering course of the River Severn for most of the way on its journey between Kidderminster and Bridgnorth. One highlight of the trip is the crossing of the River Severn by means of the Victoria bridge - a massive 200-foot single span, high above the water which, incidentally, featured in the film 'The Thirty-nine Steps' with Robert Powell in the leading role. There being few roads in the Severn Valley, some of the views are only visible from the Railway. The scenery is varied and largely unspoiled, punctuated by the quaint olde worlde' charm of country stations, each one giving ready access to local villages and riverside walks.

Why not disembark at Bewdley & take a trip to the safari park with its free-roaming giraffes, elephants & big cats. Bewdley is a magnificent small 17/18th-century riverside town, & is well worth a visit.

After a day of sightseeing, time to get your sea legs again, and cruise back down the Staffordshire Worcestershire Canal, and the River Severn back to Worcester
It is 8 .5 hours back to the Diglis basin, moor here for the night & get up early on the last day and cruise back to the marina for an hour.