OXFORD AND RETURN FROM GAYTON

Visit Oxford, the City of Dreaming Spires, famous the world over for it's University and go punting on the River, also visit the Cathedral, and the Dinosaurs & Dodos in the Museum of Natural History. 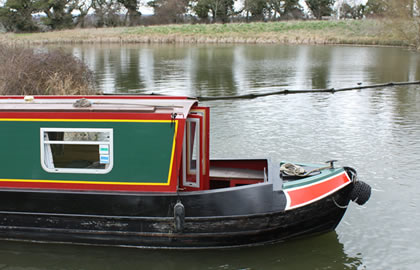 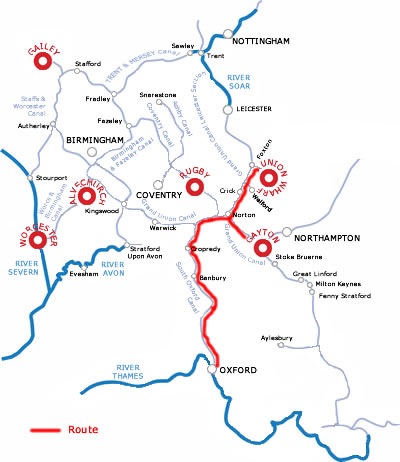 A short while after leaving Weedon you will pass brockhall Park on your right, (access from bridge 18). The Hall here is Tudor in part, and in the Victorian courtyard farm buildings has been established The Heart of the Shires Shopping Village. The Shopping village has about 25 widely ranging shops, including a tearoom, so is well worth a visit.
The canal continues through open landscape until you begin the climb up to the Norton Junction through a series of 7 locks called the Buckby locks.

The New Inn is canalside at Buckby Top Lock, with canalside seating and moorings.

At Norton Junction you can then go down the Grand Union west towards braunston.

From Norton Junction to braunston the canal runs westward through hills and wooded country, then into a wooded cutting whichs leads to braunston Tunnel.
Off to the north on your right you will pass the small village of Welton on a hill. At bridge 6 ¾ mile from the Canal you can find a 400 yr old pub – The White Horse Inn.
braunston Tunnel was opened in 1796 & is 2042 yards long.

Long rows of moored craft flank the canal, but there is usually plenty of places to moor, as it is worth strolling into braunston as there are a fine selection of old buildings here. The british Waterways office in the Stop House, was originally the Toll office between the Oxford and the Grand Union canal. By lock 3 there is a haunted pub- the Admiral Nelson. In braunston itself there is the Wheatsheaf which also has a Chinese & Thai takeaway. The Millhouse Hotel has a canalside garden, and the Old plough in the High street dates from 1672. The village has stores & a takeaway.

It is 6 hours cruising from Weedon to braunston.

At Braunston Turn turn left at the junction, the canal now passes open countryside with a backdrop of hills, there are no locks or villages and you continue on until you reach Napton Junction. You will be travelling north at this junction, but if you want a nice pub to stop at for the night, it is worth continuing left down the Oxford canal to bridge 111, as the haunted pub The bridge at Napton is by the bridge. Best access to the hilltop village is by bridge 110, the village is scattered all over the hill, but the pubs and shops are at the bottom. It is 8 hours cruising from Weedon to Napton

The Oxford canal continues a very twisting path through countryside with occasional villages dotted around.
After leaving Napton, head south along the Canal, there is a useful shop by bridge 113.

Cropedy itself is soon reached, the whole village is close to the canal, and is the home of the Annual Cropedy Folk festival in August. There are a couple of pubs in the village, and nearby was fought the Battle of Cropedy in 1644, where the Royalists defeated the Roundheads and thus protected Oxford.

It is 10.5 cruising hours from Napton to Cropedy.

From Cropedy you cruise south to Banbury, which is 2 hours away, and it may be worthwhile stocking up on supplies here, and you will only pass small villages on the way to Oxford.
Banbury was originally a wool town, but is famous because of the Nursery rhyme although the original cross was pulled down by Cromwell in 1646 there is a Victorian replica.
The Mill Arts centre has plays theatre, dance & music. .At Tooleys Boatyard you can have a guided tour and see boats being built and restored, ot also has a working forge and a gift shop and chandlery.

The village of Kings Sutton is about 1.5 miles walk from bridge 177 , it is an attractive village with stores, pubs, and even a railway station.
If you have taken a detour into Banbury it might be worth stopping for the night at Aynho Wharf by bridge 190, and there is a nice pub here.

It is 6 hours cruising from Cropedy to here.

The canal meanders through water meadows and open pastureland, the village of Somerton winds up the hill to the east of the canal near bridge 196, but there are no shops of pubs.
At bridge 204 to the east is Upper Heyford, a pretty thatched village with stone cottages, and there is a pub here- The Barley mow.

The village of Lower Heyford near bridge 205 also has a pub-The Bell.

To the west of bridge 207 is Rousham House built in 1635 and still under the same ownership. It has wonderful landscaped gardens, designed by William Kent, and almost untouched since then. The whole property is uncommercialised, with no gift shop or tea room, and no children under 15 are allowed and no dogs.

At bridge 216 is the Rock of Gibraltar pub, at bridge 221 is the Boat Inn in the small village of Thrupp, at bridge 223 canalside is the Jolly Boatman, and by bridge 224 is the Wise Alderman.
From bridge 224 you will start to see Kidlington, which is a suburb of Oxford.

It might be worth stopping the night here, as it is 7.5 cruising hours from your last stop at Ayhno Wharf, and will leave you fresh for your 3.5 hour cruise into Oxford tomorrow.

Cruise into Oxford, and take care to find a mooring, as long stretches of the canal bank are designated conservation areas, and so there is extremely limited mooring opportunities for the visiting boater. Those who are wishing to join the Thames might find it easier to make use of the Dukes Cut by bridge 232, and cruise south to just past Osney bridge and moor on the River, and get into Oxford from there.

You will need to first obtain a licence from British Waterways to cruise on the Thames, a short term licence can be obtained from the environment agency of from Thames Locks.