You can do this route from :
Falkirk Wharf.

Edinburgh has a host of fabulous attractions, from iconic Edinburgh Castle with the Crown jewels displayed to the National Museum of Scotland & great theatres offering excellent shows .

The marina is adjacent to the magnificent Falkirk Wheel visitor centre.

The Falkirk Wheel is one of Scotland's top tourist destinations and attracts visitors from all across the World, one of the most stunning backdrops anywhere on the canals, . The Falkirk Wheel is 115 feet high – the equivalent height of eight double decker buses and offers visitors a real treat. It is 115 feet wide and 100 feet long. The wheel will lift loads of 600 tonnes (300 at each end) and stands in a 330 feet wide circular basin with moorings for over 20 boats. Before re-development, the site was a deep open cast pit left behind by mining which ended in the early 1980s. The total project cost was approximately £17 million and work took 22 months. The wheel is designed to last for at least the next 120 years. It is the world’s first rotating boat lift and the first boat lift to be built in Britain since the Anderton Boat Lift in Cheshire, which dates from 1875.

Linlithgow is a town with an ancient and distinguished history. Linlithgow Palace was a favourite home of the Stewart kings and queens and was the birthplace of Mary, Queen of Scots, and Linlithgow itself was an administrative centre for many centuries. 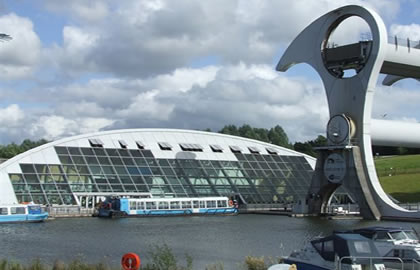 The Scottish Lowland Canals are quite different from the canals typical of England and Wales.

The Forth & Clyde Canal is much wider than the average English canal. The Union Canal is a contour canal and has no locks at all nor bridges that have to be opened. British Waterways staff currently operate all of the locks and bridges and boaters are not allowed to operate the locks themselves, although help is happily accepted. Between Falkirk and Glasgow there are 4 locks and 3 road bridges, with a further 18 locks and a number of pedestrian bridges between Glasgow and the Clyde at Bowling.

Both the Forth & Clyde and Union Canals were closed in the early 1960’s and it was not until lottery funding was obtained in 1999 that restoration works rejoined the cities of Glasgow and Edinburgh by canal. At a quarter of the cost of the overall £84.5 million project, the Falkirk Wheel is the most significant structure by far, but only one link in the scheme involving rebuilding bridges, clearing blockages and cutting new stretches of canal.

From 2018 a Rover Ticket will be charged by Scottish Canals for use of the canals. This will be a flat charge of £25 for any holiday over three nights. Use up to three days will be charged at £15. This Ticket will be administered by Scottish Canals through their website and office. Payment will be taken on the first day of the holiday at the office in Falkirk.

It is imperative you bring a mobile phone and a 3-pin plug charger. If you do not have a phone, you can rent one from the Falkirk Base at a nominal charge. You will need to contact the Falkirk Wheel staff to arrange return passage through the wheel and to contact other Scottish Canals Boat Movements staff if and when required.

Cruising East to Edinburgh:
You do not need to book your outgoing passage through the Falkirk Wheel as your passage will be booked by the Falkirk marina staff as part of your handover. As soon as you are ready to leave, they will put you in whatever queue there might be for the Wheel.
The wheel closes at 6.00pm in June, July and August. From March to May and September, October the wheel continues to close at 6.00pm on Fri/Sat/Sun but 5.00pm Mon – Thu. However all boats must be in the system by 5pm and 4pm respectively.

Enter the gondola and someone at both the bow and stern should go onto the walkway and tie off the boat. Everyone should get back onto the boat whilst The Wheel turns. British Waterways staff will tell you when to leave the gondola.

What better way to start a canal cruise than by ascending twenty-two metres up on the iconic and unique Falkirk Wheel? For many waterways the rest of the journey would be an anti-climax but as the canal was built to follow a seventy-three metre contour along its thirty-two mile length the requirement for aqueducts produced three, and to top it all the canal winds through beautiful lowlands scenery and leads directly into the heart of the incomparable city of Edinburgh.

If you are lucky enough to have clear and sunny conditions the views over the lowlands from the slowly rotating Falkirk Wheel are astonishing, being Scotland though, the chances are the weather is not so good so cross your fingers well in advance. The canal leaves the wheel on a modern aqueduct elevated above parkland looking out over gorse bush thickets and woods, the newly built Roughcastle Tunnel looms, takes the canal under woodland for a short way before coming out to a severe right-angled left turn and going immediately into an equally new two lock flight which are the only locks found on the Union Canal.

There are spots to moor after the locks with open ground to the right to explore and take in the views, there is a small aqueduct named Greenbank just a little further on with some more spots to moor up giving convenient access to Summerford Park on the north bank and Tamfourhill and Canada Woods to the south, but the railway line that runs directly parallel to the canal may dissuade you from spending the night. The canal veers to the right at a wide spot and plunges in to the Falkirk Tunnel, quite refreshingly after the somewhat sterile looking locks, aqueducts and tunnel so far. This is an original feature of the canal full of character being part brickwork and part natural rock, the end result is getting dripped on down its 640 metre length.

There is an equal mix of wooded, industrial, agricultural, urban and heathland scenery as the canal heads eastwards away from Falkirk past Brightons and Polmont. After the crossing of the A801 the canal and railway line part ways and the canal winds in a more south easterly bearing through a very open rural area towards the twenty-six metre tall twelve arched Avon Aqueduct, at nearly 250 metres long it is the second longest in Britain. On the approach to the aqueduct the trees flanking either side of the canal block much of the view of the wooded rolling hillsides beyond the aqueduct, more of the view is unveiled the closer the canal gets until the threshold of the aqueduct when the whole vista is unfolded. Good news for sufferers of vertigo, unlike the Pontcysyllte Aqueduct on the Llangollen Canal that only has railings on one side and a heart-stopping drop on the other, there are railings and brickwork towpaths on both sides of this towering structure as it carries you high over the valley floor below.

There is a short journey towards Linlithgow from here, the winding high street is full of character and plenty of choice for restocking provisions but by far and away the highlight of this pleasant little town is the staggering loch side fortified palace and adjoining church of St Michael. Whichever angle you view the palace ruins from it is astoundingly beautiful, the mind boggles at the sheer opulence of the castle and the surroundings and views offered up.

Linlithgow is a town with an ancient and distinguished history. Linlithgow Palace was a favourite home of the Stewart kings and queens and was the birthplace of Mary, Queen of Scots, and Linlithgow itself was an administrative centre for many centuries. Today the town is bypassed to the north by the M9 but remains an exceptionally busy place: and it retains enough of the character and charm of its past to place it high on any list of "must visits" in central Scotland.

The train station is next to your moorings in this lovely town and for those on a 3 nights trip you can take the 30 minutes trainride into Edinburgh , as trains leave every 20 minutes. It is under under 4.5 hours to get here from Falkirk Marina, so plenty of time to get the train into Edinburgh and do some more sight-seeing, and then cruise just 4.5 hours back to Falkirk again.